While walking, two brothers jumped off the train tracks when they saw a strange object, thereby saving a life. 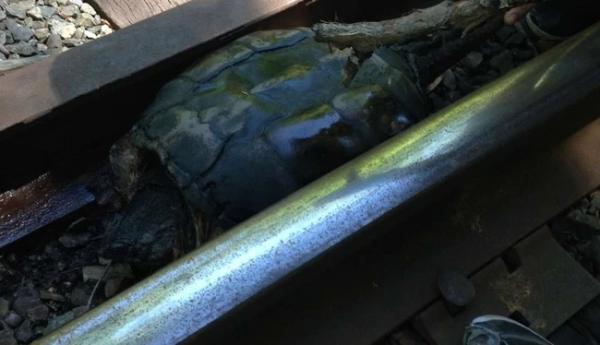 Thanks to the help of the Jacob brothers and animal control staff, the turtle kept its life.

In 2014, Jacob Vincent and his brother Max were walking along the train tracks near their home in Lincoln, Rhode Island, USA, when by chance, Jacob noticed something black stuck in the middle. railway. Curious, he approached, realizing it was a poor turtle in need of help.

It is not clear how long the turtle was trapped, but according to Jacob’s observations, the animal was suffering from a lack of water and suffered a lot from external factors such as hot sun. At this time, two brothers Jacob and Max stand between two choices: save the turtle or ignore it, to follow “God’s will”.

Without thinking, Jacob of course chose option 1. Then, he ran to a nearby stream and collected water into his water bottle to water the turtle’s body, refuel and provide more energy for the turtle. it. The next task of the two brothers is to get the turtle off the tracks. They used all their strength to pull the animal out but failed, not even making the animal move at all.

While rescuing the turtle, Jacob feared that the next train would come and run over the animal. Checking the train schedule, he was startled to realize that it was less than an hour before the train would arrive and that was also the time they had to save the animal.

Realizing he couldn’t free the turtle himself, Jacob called local animal control. As time passed, the two brothers became more and more impatient when they faintly heard the train coming. At this moment, animal control arrived. Because the tortoise was stuck for so long, perhaps the turtle also gradually lost its composure, it began to panic, swinging all four limbs incessantly.

Jacob just came up with an idea to use a wooden stick as a lever to get the turtle off the tracks. Although this idea sounds impossible, at present, they have no other choice. 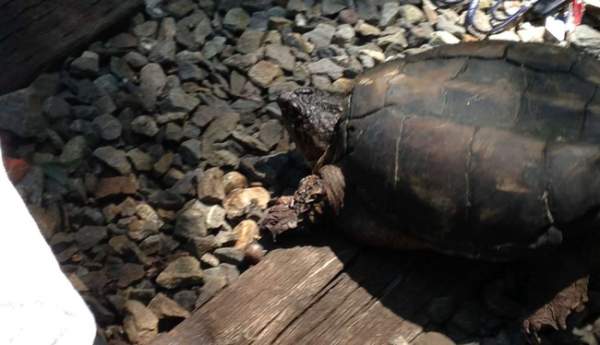 Efforts for 5 minutes, the brothers Jacob and the animal control officer could not move the turtle even a little. Even so, they still did not give up, kept fidgeting around the side of the turtle and in the end everything paid off, the animal was rescued from the narrow track.

After that, people brought the turtle back to the stream, where it originally belonged. This ending made everyone heave a sigh of relief. 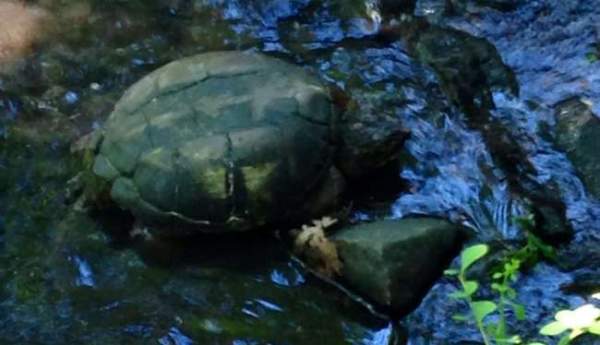