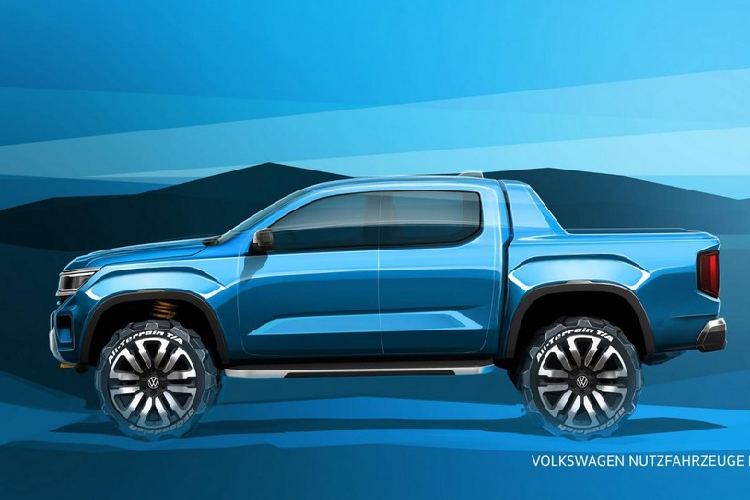 At the end of last year, Ford officially unveiled the new generation of the Ranger mid-size pickup. In this year, New Volkswagen Amarok 2023 – “brother” of the new generation Ford Ranger – is expected to “follow in” and launch. This is not surprising since Volkswagen and Ford are currently working together.

Before the launch time, the model Volkswagen Amarok pickup truck 2023 has been released the official sketch image. According to Volkswagen, this is a sketch image of the Amarok version ready for commercial production.

Through these images, it can be seen that the car possesses a bold exterior design. On the front end, Volkswagen Amarok 2023 is equipped with “muscular” air intakes and silver accents, forming an “X” shape. Besides, there are smooth headlights, grille with a horizontal brace and prominent rescue hook. In addition, this pickup model seems to be equipped with a tow winch integrated into the front bumper.

The next notable design details of the Volkswagen Amarok 2023 are the sporty ribbed bonnet and strong fenders. Behind this fender is a car door whose design is taken from Ford Ranger 2022.

Meanwhile, the rear design of the Volkswagen Amarok 2023 is not the same as the new generation Ford Ranger. The car has the words “Amarok” embossed on the rear trunk door and taillights with “C”-shaped brake lights. Below is the rear bumper with metal accents, central air vents and 2 slender horizontal reflectors.

Currently, Volkswagen has not released much information regarding this pickup model. Just know that the length of the Volkswagen Amarok 2023 will increase by 100 mm to 5,350 mm. In addition, the car is wider than the previous generation and the ground clearance is increased to improve off-road ability.

According to Volkswagen, the interior of the new generation Amarok will be more advanced designed to raise the standard of the 1-ton B-size pickup segment to a new level. With the increased length, the interior of the Volkswagen Amarok 2023 is also wider, providing more legroom in the second row for passengers.

It is expected that the Volkswagen Amarok 2023 will be equipped with a 2-color interior, a gear lever with a minimalist design, a digital dashboard and a vertical infotainment screen. Volkswagen promises the Amarok 2023 will have new features, including driver assistance systems unmatched in the mid-size pickup segment while providing a more comfortable everyday driving experience.

The operating parameters of the above engines have not been announced yet. Just know that the engines of the car will come with the same 10-speed automatic transmission as before or a new 6-speed manual transmission. Customers will have two options of 2-wheel drive, including an electronic transmission system (Shift-on-the-fly) and a full-time 4-wheel drive system.

Developed by Volkswagen’s teams in Australia and Europe, the next-generation Amarok will be assembled at the factory in Silverton, South Africa.