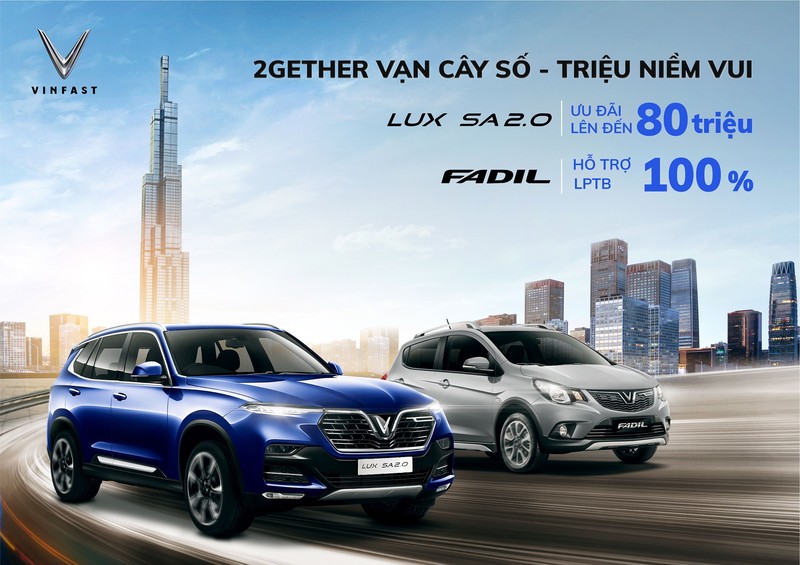 Specifically, VinFast will donate 100% of the registration fee to customers who buy Fadil cars from June 11 to the end of July 31, 2021, directly deducted from the selling price.

For the Lux A2.0 sedan, for the first time, customers will be able to use a Vinhomes voucher with a face value of 200 million VND to pay, thereby saving a large amount of money when buying a car. Previously, this voucher value was only applied when customers bought Lux SA2.0 cars.

Meanwhile, the Lux SA2.0 SUV will receive a direct discount of VND 80 million for the Standard version and VND 60 million for the Advanced and Premium versions if customers buy a car in June. Especially, in school In case the customer-ordered version is not available, VinFast will support an additional 10 million VND/month in the meantime. For example, if a customer buys a Lux SA2.0 Standard version in June but only receives the car in August, the total incentive customers will enjoy will be VND 100 million. This is an unprecedented policy in the Vietnamese market.

The special promotion program implemented by VinFast for all 3 models of Lux SA2.0, Lux A2.0 and Fadil in June is considered an act of gratitude of the Vietnamese car company for its customers on the occasion of the anniversary. Inaugurating the factory and officially handing over the first cars to customers.

Exactly 2 years ago, on June 14, 2019, VinFast inaugurated the leading modern automobile factory in Southeast Asia in Cat Hai, Hai Phong. Three days later, on June 17, 2019, VinFast held a ceremony to hand over the first 650 Fadil cars to customers nationwide, officially placing the first footprints on the market. Up to now, all 3 VinFast models have risen to the top of their segments, becoming the most popular models of customers.

In parallel with the special promotion program for customers who order a car in June, VinFast is still implementing the best customer care and support policies in the market, such as a 5-year warranty or 165,000km for customers. with Lux cars, free 24/7 rescue during the warranty period for all models, or free parking every 6 hours at Vincom and Vinhomes facilities nationwide. In the context of the complicated development of the epidemic, customers will also be supported with convenient online loans if they buy a car on installments, and receive advice, test drive, and sign a contract at home.