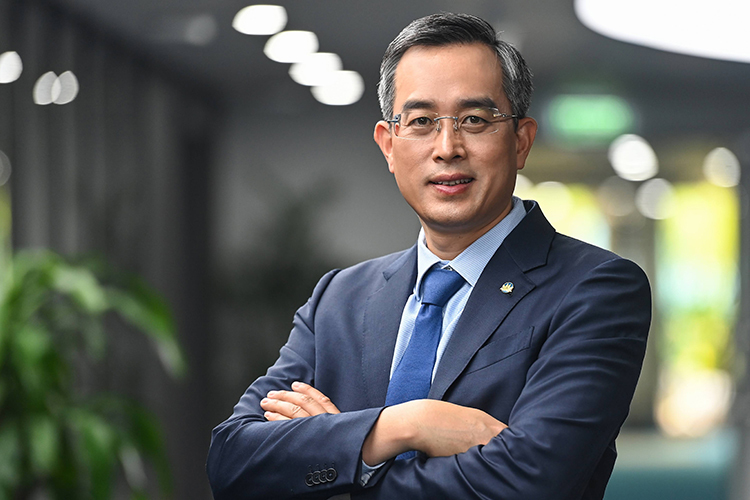 Dang Ngoc Hoa was appointed Chairman of the Board of Directors of Vietnam Airlines in August 2020. At that time, two leading national airlines in Southeast Asia, Thai Airways and Malaysia Airlines, filed for bankruptcy protection. The leading position of National Airlines comes with responsibility for a fleet of more than 100 ships, 22,000 employees, and a passenger market that has dropped to almost zero.

Mr. Hoa had an exchange with VnExpress about vital moments, about the motivation that helped the Vietnam Airlines team to get through 2021, and hopes for the future.

– He was appointed in August 2020, at the most difficult period of the world aviation industry. How did it feel at that time?

– More than a week before my inauguration, a special event took place. It was a flight to rescue Vietnamese citizens from Equatorial Guinea, landing in Noi Bai on July 29. On the flight with 219 people, half were confirmed to be positive for Covid-19. Now we are more used to it, but at that time Covid was something very mysterious and scary. Entering the epidemic area at that time in the mind of the crowd was going to die. At first, we thought we should appoint people for rescue flights.

But then only for the flight to Equatorial Guinea, 150 people including pilots, flight attendants and technicians volunteered to fly. The flight crew of 15 people of Vietnam Airlines and 4 doctors of the Central Hospital for Tropical Diseases made an unprecedented flight. At that stage, I knew they had to face great psychological pressures. Pressure from the task itself. Pressure from public opinion is very high.

Before being appointed president of Vietnam Airlines, I was the Chairman of Vietnam Airport Ground Services Company (VIAGS – a member company of Vietnam Airlines) and witnessed that spirit from you. If at the beginning of 2020, you asked a VIAGS aircraft disinfection technician or an aircraft maintenance engineer, if you were to step on flights from an epidemic area, like Wuhan, if you were afraid, they would reply. answer: “I’m scared”. But if asked why they are afraid to still volunteer to step on those planes, they will say: “If I don’t get on, who dares to board my ship?”.

The image of cadres ready to go when they don’t know what awaits them makes me emotional. That’s when I saw the spirit of Vietnam Airlines, the patriotism, the concern for the compatriots, and the concept of serving.

And so, the feeling when taking office is a huge determination. Difficulty is natural. But the more difficulties, the more opportunities for Vietnam Airlines to assert its role.

– In his inauguration speech as Chairman of the Board of Directors of Vietnam Airlines, he gave the message that “at all costs, we must preserve the achievements of our father’s generations”. How do you feel when it is remarked that the task was more of a burden to you at that time than a privilege?

– I joined Vietnam Airlines in 1994, originally a technician. Before being appointed, he was Deputy General Director in charge of engineering and Chairman of the Board of Directors of Vietnam Airport Ground Services Company. If there was no translation, I would have been worried enough. I know that taking on this position, I will face many more areas beyond my daily expertise.

By the way, August 2020 is the time when the whole aviation industry begins to “get hit” because of the pandemic. Two other national airlines, Thai Airways and Malaysia Airlines, had just filed for bankruptcy protection shortly before I took office.

– Up to now, after more than a year looking back, have you and your colleagues implemented that “at all costs” statement?

– Over the past year, there have been many sleepless nights. As a citizen, I trust the government’s decisions. But as an airline worker, there isn’t a minute that I don’t pray for the distance to end, to be able to fly again.

Vietnam’s aviation industry only has two peak seasons bringing high revenue, the Lunar New Year and the summer – the tourist season. But in 2021, the 3rd wave and especially the 4th wave extinguished all hope of flying. The cost for the fleet is huge, while commercial flights are almost non-existent. More than 100 aircraft, 22,000 people, but there are periods when there is no flight, no revenue but still have to pay daily fixed costs of about 60 billion – 70 billion VND. Facing survival is real.

But the most significant thing that Vietnam Airlines can do in 2021 is to keep consensus. 50% of our staff have to take a leave of absence without pay, only the allowance is more than a million per month. The rest of the people who go to work receive only half of their salary. But so far I have not received a single complaint. My income is down, I still see brothers and sisters who don’t mind showing up even Saturday, Sunday or night, as long as there is a need. The crew of pilots and flight attendants share each flight hour. Everyone has a hard time, but they don’t quit the company, but are waiting for the day to come back.

We are also constantly looking for solutions to fly, to fly and to increase revenue. Passengers dropped sharply, we removed the plane seats to switch to cargo. This year, Vietnam Airlines’ cargo revenue exceeded the plan by nearly 150%.

The government – as a major shareholder of Vietnam Airlines – has provided timely financial support for the airline to overcome the vital moments. But we are always aware that we have to change ourselves, make our own efforts. We give you four words: “Cut, Reduce, Stretch, Postpone”. Vietnam Airlines itself this year reduced more than 6,000 billion costs.

– Many major airlines have had to declare bankruptcy or protect bankruptcy, most recently the National Airlines of the Philippines and Indonesia, have you ever thought about the scenario of Vietnam Airlines going bankrupt under Chairman Dang. Ngoc Hoa or not?

– I must confess that when meeting with partners, especially suppliers, we also put on the table the scenario of Vietnam Airlines bankruptcy. But in my heart I always believed that it was just a strategy to negotiate. I mean: If we go bankrupt, you won’t get anything, so you guys should cut our costs. But deep in my heart, I, like the Vietnam Airlines team, have never stopped hoping. Losing morale is losing everything.

As I said, the biggest achievement of Vietnam Airlines is to maintain solidarity and consensus. From there, new solutions were born. There are tasks that at first I thought were more difficult than moving mountains, such as negotiating with foreign partners about reducing aircraft rental rates and canceling signed leases. But then it turns out that mountains can also be moved. Particularly in the current lease, we negotiate to reduce as well as cancel some signed leases up to billions of dollars.

– In this difficult context, what do you say to convince everyone to believe in and keep the unity of the company?

– Can’t convince others with words. After talking for a short time without action, the words also flew away. I have to act so that you guys can look at me.

Like recently there was a preferred stock split. For a long time now, the share ratio is for brothers and sisters in the Corporation, and by seniority, by position. Do the same everywhere. If so, there are certain members of staff who will receive a significant amount of extra money – especially during this pandemic season of declining income.

I invited the leadership team to my room and talked until the night. I said that it is correct to divide it among brothers and sisters according to seniority and position. But I’ve been working for a long time, I also have a bit of accumulation, I’m not receiving a bonus right now as much as young people who have just started working, who are working in member companies. So we agreed to divide the preference shares equally among all 15,000 people, each only getting a few million more, but it was also encouragement.

At this time, the most important thing is that the staff work must be public and transparent. We’ve been through a lot of staffing changes, especially when it comes to choosing who to take unpaid leave. But all of them have to be very fair. The more difficult, the more decent.

– With the challenges that have passed with a lot of efforts to “fight”, what do you think you have achieved since taking office?

– Actually, the way that Vietnam Airlines is overcoming this period is the solidarity, consensus, the tradition of the whole team built and forged through generations of leaders. I have two favorite books that I have been applying to organizational philosophy. The first is Nick Obolensky’s Complex Adaptive Leadership. It has a message that life in an organization is increasingly uncertain and complex, and so an individual can never do everything. So we have to do so that in an organization, everyone understands their functions and tasks. Must empower, decentralize.

Empowerment must then encourage people to make decisions. Not everyone likes to have the right, in Vietnam there is a saying “the right to fight the stone”, and there will be people who are afraid to make decisions. There must be a way in which everyone can act for the common good.

There are many management perspectives. But I believe in empowerment, decentralization. And the fact that everyone shares that opinion with me, and “dare to do it”, has helped us through the past few days.

The second book is called Enabling Knowledge Creation. It says that every human being has existing knowledge and potential knowledge. The manager’s job is to appreciate the potential of each person, believing that they can do better than what is in front of them – that is, existing knowledge. He must motivate, encourage, and sometimes put pressure on employees to reveal potential knowledge. I myself discovered many new abilities at the age of U50. But when the situation requires me to do it, I can still do it. There were negotiations that we did not dare to believe were successful, just because we were forced to do so for the survival of the Vietnam National Airlines. But finally convinced the partner.

And I also don’t think my task at this stage is just “support”. It’s difficult, but as soon as I have the opportunity, I still have to prove the position of the Vietnam National Airlines. The fact that Vietnam Airlines opened a direct flight to the US last November is something that makes me proud. It’s been a dream for 20 years, since 1994 when I first entered the corporation, since the normalization of relations between the two countries. Generations of leaders have pushed for that to happen. Now that I have the opportunity, I have to complete the quest.

– In the new year of 2022, do you have any message to the employees of Vietnam Airlines, who have been fighting with the airline for the past year?

– I just want you to keep the iron faith that Vietnam Airlines will come back and be stronger than before the pandemic. The fundamental philosophy of Vietnam Airlines is that people are the most precious capital. And everyone’s trust, along with the unity of heart, is the most important thing we have right now.