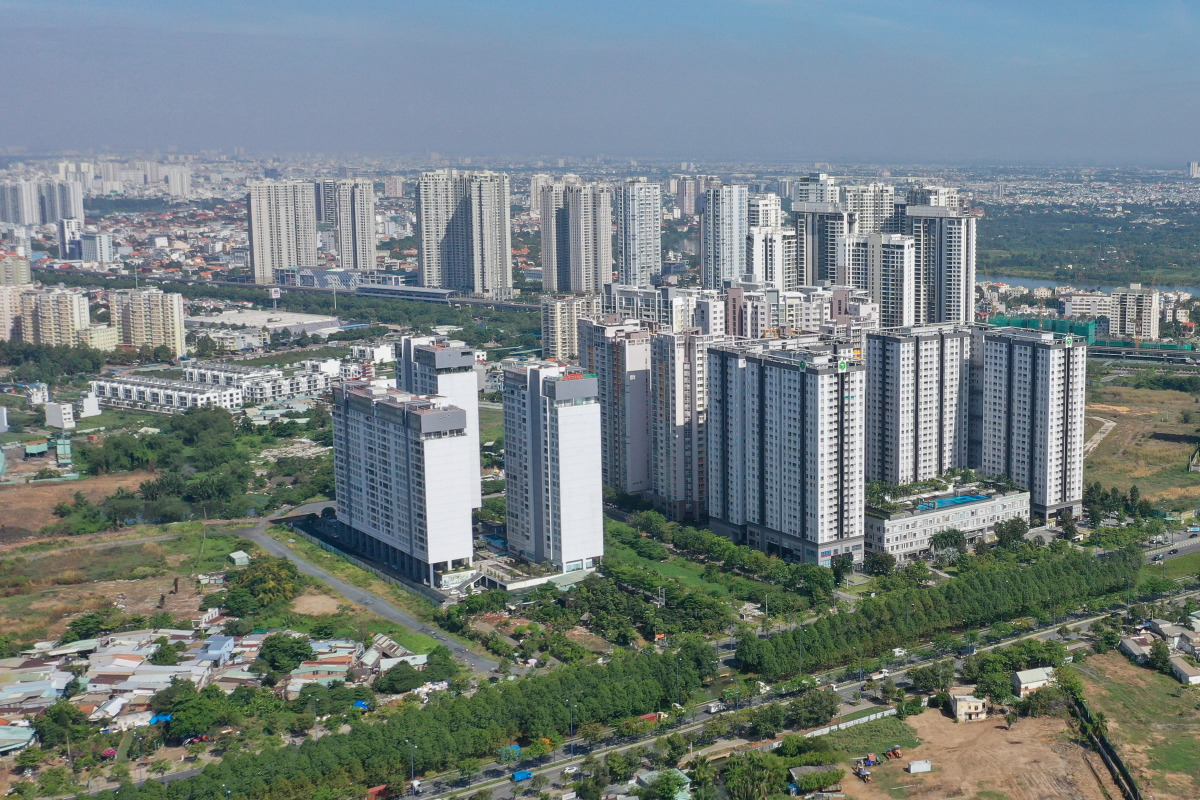 Ho Chi Minh CityA few months ago, Mr. Dien advertised for sale at a loss of VND 100 million for a one-bedroom apartment, priced at VND 1.7 billion, under construction, but no one asked to buy it.

Mr. Dien, who is staying in Binh Thanh, said that at the end of 2020, when the Covid-19 epidemic had not broken out for the fourth time, he was excited because he bought the first house in his life for 1.8 billion VND with the attached price. many incentives, high discounts, long payment schedule in the East area of ​​Ho Chi Minh City. “My wife and I feel that we have just conquered ourselves, reaching the milestone of buying a house at the age of 30. But this feeling quickly passes when the payment deadline approaches,” Mr. Dien confided.

With a loan of more than 1.3 billion VND (preferential interest rate for the whole year of 2021), from the beginning of 2022 onwards, the interest rate is floating, plus the principal debt, each month he and his wife pay more than VND 25 million to the bank.

By the end of March, self-assessed with financial exhaustion, Mr. Dien and his wife discussed selling the house formed in the future because if it lasted, they would face “debt repayment”. The idea that selling a house can quickly make a difference of a few hundred million dong like an advertisement sale at the time of the sale, but encountering reality, made Mr. Dien immediately disappointed because no one asked to buy it, and the brokerage fee was high. Previously, the apartment was the pride, now this property has turned into a persistent debt.

“In March, no one bought the original price, from April until now, I have reduced the price by 100 million dong, of which 50 million dong are incentives received when buying a house, but there are still no interested customers. If I hold the goods, I will lose interest, not to mention the brokerage fee of 2% of the contract value”, Mr. Dien worried.

He said that in the first year of receiving a house to live in, the couple was still excited because there was cash flow from both sides of the family to support the payment. But from 2022, interest rates go up and no longer receive financial help from the family, the principal debt and monthly installment interest become an obsession of husband and wife.

Mr. Ky recounted that the income of both husband and wife when buying a house was 45 million dong a month, but from the third quarter of 2021 onward, it dropped to less than 40 million dong. From October last year to April 2022, he and his wife had to spend more than 30 million VND per month separately to pay the house rent, the family budget was always exhausted when it was not yet time to receive salary, spending had to be frugal to debt repayment. Under great pressure, having a small child, he sold the apartment for 2.3 billion VND for 6 months before having customers to buy it.

“If you include the profit, the loss is up to nearly 300 million dong,” Ky said and admitted that despite the loss, he did not regret because he had learned the lesson of buying a house later. He said, after selling the house, he returned to the scene of the boarding house at the moment, the rent is very cheap, so he can relieve all the burden.

Mr. Khoa, a freelance broker specializing in the product line of apartments for secondary sale (customers and investors buy and sell) in the East area of ​​Ho Chi Minh City, said that in the last 2 years, projects offering products Products often appear quite a lot of customers F0 (first time home buyers). Most of these customers prefer to use financial leverage with a preferential package of one-year interest rates.

These people are often eager to buy a home but have not seen all the complicated problems behind when the incentive programs, promotions, and grace period of the original debt end. After one to two years of buying apartments, there are always F0 customers who quietly discharge their goods below cost due to financial distress.

According to Mr. Khoa’s estimation, in the past 2 years, the number of F0 investors who sold to stop loss that he had recorded tended to increase. “Even though these F0 customers sell apartments at the original price, even lower than the purchase price, the exit cases are still difficult to compete with the investor’s sales policy, which always offers more incentives, delays the progress. payment is longer than previous sales to promote product consumption, “said Mr. Khoa.

Mr. Nguyen Loc Hanh, General Director of Ngoc Asia Company, confirmed that there are many cases in the market where homebuyers only hug for about a year to 18 months. After that, they silently released the goods, accepted to sell at the price at the time of purchase, if including taxes and fees, they would have to suffer a loss of at least 7-8%. There is also a group of F0 customers who accept to sell at a loss of more than 10% because of financial burden.

According to CEO Ngoc Asia, this group of F0 customers mostly lacks knowledge to buy houses. At first, the payment of 15-20% and the remaining grace period of principal until receiving the house was quite gentle, but when it came to the house, new financial difficulties began to appear. Many people who buy apartments when they first move in are very interested because of the mentality of owning a home for the first time in their life, getting rid of the rental situation. However, the financial burden makes this experience no longer as shimmering as it was in the beginning. The expectation of selling quickly to take profit as the broker’s scenario at the time of sale could not be fulfilled because the market liquidity was quite weak. Since then, leading to many cases where F0 investors had to sell at a loss to escape financial pressure.

This year, according to a survey of Ngoc Asia Company, Mr. Hanh said that the apartment price level has set a very high new level. As of May 2022, a 2-bedroom, 2-bathroom apartment has an average of 65-70 m2, the selling price in District 12 is up to 45 million VND per square meter, equivalent to 2.8-3 billion VND per unit. House with one bedroom, one toilet, price in the range of 1.8-1.9 billion VND per unit.

In the old district 9 now belongs to Thu Duc city, according to Mr. Hanh, even the price of newly opened apartments has skyrocketed to the threshold of 50-70 million VND per square meter while the old Thu Duc district also has apartments offering prices up to 80 million VND. one m2. With such a price, whether payment is delayed or banks support interest rates for the first time, until the end of the preferential period, these customers will feel “suffocated”.

Mr. Hanh said that for home buyers, assuming the actual income of the young couple reaches about 50 million VND a month, it is difficult to boldly buy an apartment with this year’s listed house price. Because even with accumulation or initial support, it is still impossible to pay interest. Two years of Covid, income decreased or lost income, until this year, wages have not increased but prices have escalated, inflation is high, if you still have to squeeze out monthly interest payments, it is a “nightmare” for real buyers. and has not yet reached the safe financial threshold.