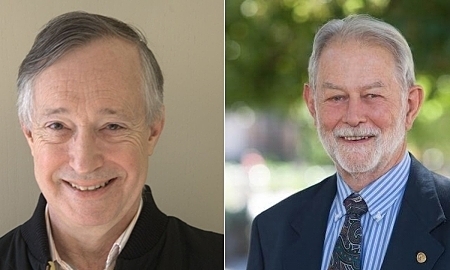 Paul R. Milgrom and Robert B. Wilson are the next two names to be awarded this award, with research in auction theory.

At 16:50 on 12/10 (Hanoi time), the Royal Swedish Academy of Sciences announced the 2020 Nobel Prize in Economics to Paul R. Milgrom and Robert B. Wilson. Both have contributed to the improvement of auction theory and the creation of new auction formats.

Paul Milgrom was born in 1948. Robert B. Wilson was born in 1937. Both are American and currently teach at Stanford University (USA).

The Royal Swedish Academy of Sciences said the auction was everywhere. People use auctions to buy and sell things on the Internet. However, each person’s goals are different. Some sellers want to maximize sales. Others use auction as a tool to reduce CO2 emissions. “The auction theory of Paul Milgrom and Robert Wilson is the key to understanding how these goals can be achieved,” the agency said.

Last year, the award went to three scientists Abhijit Banerjee, Esther Duflo and Michael Kremer. They are awarded with research on an empirical approach to global poverty reduction.

Economics is usually the last award awarded each year with the Nobel Prize for Medicine, Physics, Chemistry, Literature and Peace. The Nobel Prize for economics was not part of the original prize structure in the will of the Swedish scientist Alfred Nobel. This award was added in 1968, on the 300th anniversary of the establishment of the Central Bank of Sweden – Sveriges Riksbank, which is also the fund contributor of this award.

However, the process of nominating, selecting and awarding the Nobel Prize in Economics is still similar to other fields. This year’s Nobel Prize winner in Economics will be awarded 10 million Swedish kronor (about 1.1 million USD).

To date, the Nobel Prize in Economics has been awarded 51 times to 84 scientists. The youngest was named at the age of 47, and the oldest was 90. Up to now, only two women have won this award.