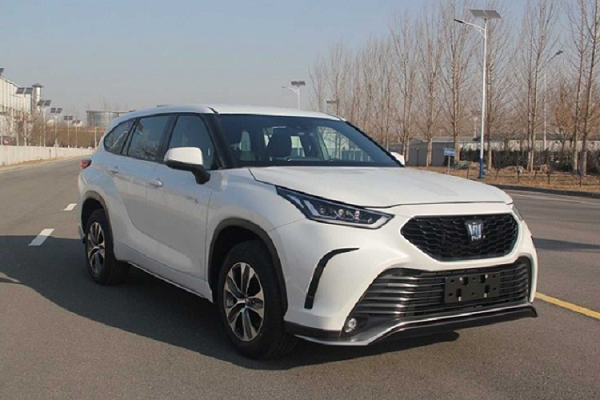 Mitsubishi Eclipse and Ford Mustang are not the only names given to later CUV / SUV versions. Famous Japanese sedan – Legendary Toyota Crown has officially died since 2020. But now, it is about to “reborn” in the form of a high-roaring car.

The first pictures of Toyota Crown SUV version revealed in a publication by China’s Ministry of Information Technology and Technology (MIIT) under the name of Crown Kluger. In this country, every new model sold must go through the MIIT certification process. Therefore, the appearance on the MIIT edition also means the confirmation of the upcoming launch of the car.

The aforementioned model has not been officially announced, but some technical information has been revealed with many similarities to the Toyota Highlander in the US.

The weight of New Toyota Crown Kluger 2022 about less than 2,000 kg, 18 inch alloy rims. The car is likely to use a 2.5 L hybrid engine with a capacity of 189 horsepower. However, the many design details and the Crown-style logo at the top of the car are the biggest affirmations of the difference of the new SUV model.

Toyota Crown debuted in 1955, has gone through 15 generations now. Faced with poor sales but not wanting to give up the brand that has been built for too long, Toyota decided to turn the Crown from a sedan into an SUV line.

According to a report from Japanese news agency Chunichi, sales of Crown right now are pretty bad. The sale is so slow that Toyota is forced to ditch it and replace it with an SUV in 2022. Notably, Toyota will retain the “Crown” designation for the SUV.

This information shocked many car lovers, but it is the most reasonable decision of the Japanese automaker at the moment. general direction. Sales of large sedans are now declining, with customers turning to small to large undercarriage because of its versatility.