Tomorrow 5-5, Inspector of the Ministry of Culture, Sports and Tourism will work with Son Tung M-TP 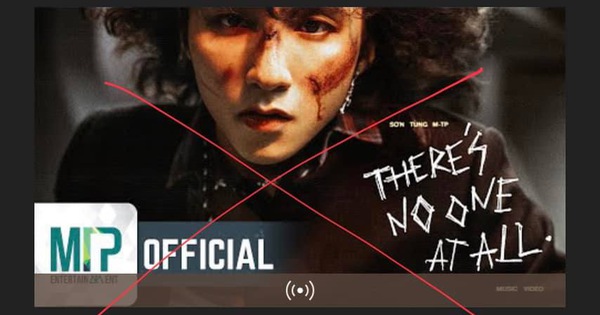 The MV ‘There is no one at all’ by Son Tung M-TP when it was released was called for boycott by many people – Photo: Facebook Toan Nguyen

Source of Youth Online said that the inspector of the Ministry of Culture, Sports and Tourism sent an invitation to Mr. Nguyen Thanh Tung (Son Tung M-TP) to the office of the inspectorate of the Ministry in Hanoi to work tomorrow afternoon, related to the MV. There is no one at all which Son Tung M-TP posted on his YouTube channel on the evening of April 28.

Ministry inspector suggested Son Tung M-TP kWhen working, provide a written explanation of the above report and a number of related papers.

Previously, on April 29, the Performing Arts Department sent a document to the inspector of the Ministry of Culture, Sports and Tourism; Department of Radio, Television and Electronic Information (Ministry of Information and Communications) on handling organizations and individuals circulating phonograms and video recordings There’s no one at all tnetwork environment.

According to the Department of Performing Arts, Son Tung M-TP’s MV has a bad influence on young people, especially the suicide scene at the end of the MV.

For an influential performer like Son Tung M-TP, it is even more dangerous because there are many followers, especially young people in the age of psycho-physiology who are not yet fully developed, very easily affected. enjoy.

In addition, the MV . content There is no one at all violating Clause 4, Article 3 of Decree 144 on performing arts activities.

At the same time, this Department proposed the Inspector of the Ministry of Culture, Sports and Tourism to handle acts of organizations and individuals circulating phonograms and video recordings according to the provisions of Decree No. fines for administrative violations in the field of culture and advertising.

At noon on the same day of April 29, the Department of Radio, Television and Electronic Information also sent a request to Google to stop this MV immediately, other network platforms must not be posted.

From the community side, after MV There’s no one at all by Son Tung was published, there were many influential people in the field of education calling for a boycott and reporting the MV. Some people also think that Son Tung should be called to lower the clip and apologize to the audience.

On the evening of April 29, before a wave of criticism from public opinion as well as moves from management agencies, Son Tung M-TP publicly apologized to the public and suspended the release of the MV. There’s no one at all in Vietnam.