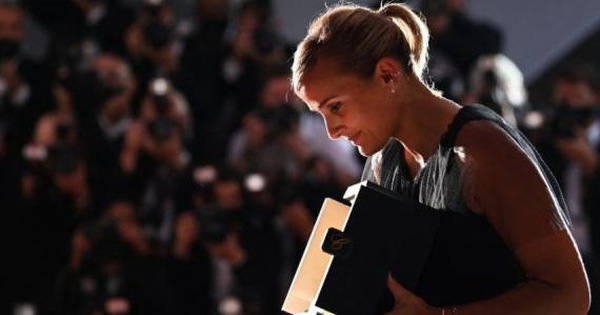 This metal is related to the female protagonist of the film. A piece of titanium was inserted into Alexia’s brain to save her life after a childhood car accident. As a teenager, Alexia (Agathe Rousselle) enjoys making love to cars and killing men.

On the run after the murders, Alexia meets Vincent (Vincent London) – a firefighter whose son has been missing since childhood. Vincent gives Alexia a refuge, Alexia helps Vincent heal the pain.

According to Madame Figaro magazine, the Cannes Film Festival has dealt a blow to the gender inequality and film genre in cinema when awarding the highest prize to Titane – the film “irregular” by a 38-year-old female director, the youngest of the 4 female directors “confronted” with 20 male directors.

Titane and “irregular” for not following the usual pattern, for extreme violence and physical abuse, for the uncanny combination of women-machines with love for cars and fatherhood, because the lead actress Agathe Rousselle is a “newbie”, genderless and has only acted in 3 short films before.

What does the director say?

Julia Ducournau admits: “No movie is perfect. People even say my movies are weird. […] I realized that perfection is not a fantasy but a dead end. And the monstrosity that some people fear runs through my work. It is the weapon, the power to push back against the wall of conformity that holds and separates us.”

It will probably take a long time to Titane accepted by critics. However, during the screening on July 13 at the Festival Palace, people did not see the audience leaving their seats and leaving before scenes of violence or sex.

The audience was just amazed by the extreme power of the image and laughed. This does not escape the observation of Julia Ducournau – who claims to be looking for the audience’s reaction instead of provoking them.

Julia Ducournau – the female director who was awarded the Palme d’Or at the 2021 Cannes Film Festival – made such a statement in her acceptance speech.

The second female director to receive the Palme d’Or

To protest the 1938 Mostra Film Festival organized by the fascist government in Venice (Italy), the French government planned to organize an international film festival in Cannes in 1939.

This plan did not materialize because of World War II. It was not until 1946 that the first Cannes Film Festival was born and was held every year, except for the years 1948, 1950 (due to lack of funds) and 2020 (due to the epidemic).

In 74 times, the Palme d’Or (before 1955 was the Grand Prize) – the highest award of the Cannes Film Festival – was awarded only twice to female directors: Jane Campion for the film. The Piano (Piano Lessons) 1993 and Julia Ducournau with film Titane (Titanium) in 2021. However, Jane Campion had to share the 1993 Palme d’Or with Tran Khai Ca (the film Conqueror Farewell), while Julia Ducournau monopolized Golden palm branch 2021.