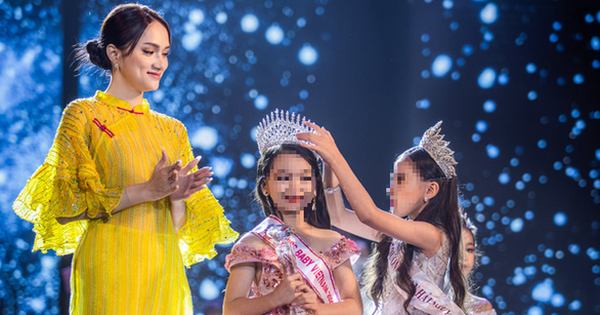 Although only licensed to perform art and fashion, the organizers of Miss Baby Viet Nam organized a real child beauty contest, with the beauty crown and many other titles awarded after many competitions. as a beauty contest for adults – Photo: KIDS MODEL VIET NAM

Exchange with Youth Online This morning, October 15, Mr. Nguyen Thien Binh – deputy director of the Department of Culture and Sports of Thua Thien Hue – said he had just received instructions from the Department of Performing Arts to ask to check and verify the mistakes of The organizers of Miss Baby Viet Nam like Youth Online reported on October 14 evening.

Mr. Binh said the Thua Thien Hue Department of Culture and Sports only licensed the art show and fashion show, not a child beauty contest.

Talking to Mr. Tran Huong Duong – Deputy Director of the Department of Performing Arts – Mr. Duong said as soon as he received information reflected from the newspaper YouthThis morning, October 15, he directly phoned the deputy director of the Thua Thien Hue Department of Culture and Sports, Nguyen Thien Binh, to check this case and strictly deal with any mistakes.

In addition, Mr. Duong said that after this incident, the Department of Performing Arts would also consider issuing a written recommendation to the provincial cultural departments to be careful when licensing art shows that the audience shows. the actor is a child; At the same time, it is necessary to strengthen post-inspection with these programs to early detect mistakes, promptly handle them, avoid letting them loose so that they can easily make mistakes.

As believe Youth Online brought, on the evening of October 10 at Song Huong Theater (Hue city), a child beauty contest Miss Baby Viet Nam took place for children of children’s age was held. Miss Baby Vietnam crown is given to a child contestant in Nghe An with prizes and gifts from the organizers worth 200 million VND.

The organizers also awarded the 1st runner-up, 2nd runner-up, and many other titles.

Ten years ago, Tuoi Tre newspaper had a series of articles from readers reflecting on the story of “Selling young rice”, a child model, a situation of quite a few girls and boys at the age of 12-16 pursuing their dream of becoming ” stars “in the modeling world due to the encouragement of many adults, from families and organizations, advertising agencies, training and providing models.

Many opinions from Tuoi Tre readers think that it is necessary to let children be innocent. In recent years, there has been a resurgence of child supermodel programs, and moreover, there are more contests than lose to win Miss, Supermodels for children at the cost of contestants It’s so big that many people can’t help worry

TTO – Mr. Tran Huong Duong, deputy director of the Department of Performing Arts, said the Thua Thien Hue Department of Culture and Sports did not license the Miss Baby contest, but only licensed the fashion show night.