The world is standing on the mountain of debt 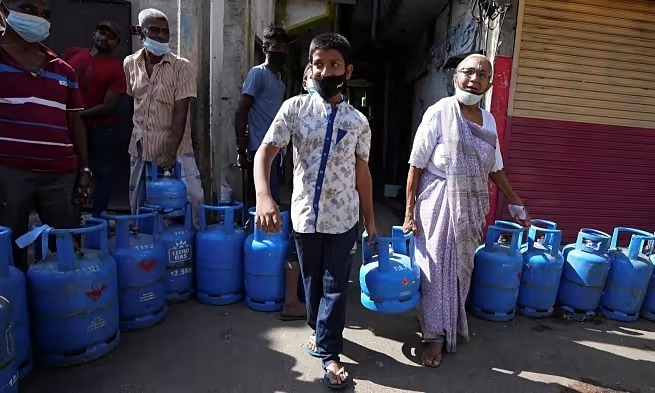 Countries rushed to borrow during the pandemic, causing the global public debt mountain to reach a record $71.6 trillion this year.

Sri Lanka declared a default on its debt on April 12, with $51 billion in foreign debt, as the country faced its worst economic crisis since independence in 1948. Last month, inflation here. hit 18.3% – double the rate in the US. Prices of all essential products skyrocketed.

Sri Lanka defaulted on its debt in the context that the whole world was also burdened with a huge mountain of debt, which had accumulated significantly over the past two years of Covid-19. According to the “Public Debt Index” report released by the Janus Henderson Foundation (UK) earlier this month, global public debt is expected to increase by 9.5% to a record $71.6 trillion this year.

Previously, in 2021, the report said that global public debt reached a size of 65,400 billion USD, an increase of 7.8% compared to 2020. That was the time when every country increased borrowing when interest rates fell to record lows. , to $1.010 billion, with a real interest rate of only 1.6%. However, debt repayment costs are expected to increase by 14.5% this year to $1.160 billion.

However, the debt volume was very high before Covid-19 appeared. During the pandemic, deficits and debt grew much faster than in the early years of other recessions, including the Great Depression of the 1930s and the 2008 financial crisis.

According to the IMF’s Global Debt Database, global debt has grown by 28%, to the equivalent of 256 percent of GDP in 2020. Public debt accounted for about half of this increase, with the rest coming from non-financial companies and family. Public debt now accounts for nearly 40% of total global debt, the highest in nearly six decades.

The number of advanced economies with debt greater than GDP has increased dramatically. “The pandemic has had a huge impact on government borrowing and the consequences will linger for some time,” said Bethany Payne, global bond portfolio manager at Janus Henderson. . The Ukraine crisis is also likely to pressure Western governments to borrow more for defense spending, he said.

In Australia, Stephen Anthony – chief economist at Macroeconomics Advisory predicts that the country’s public debt could double, from the current $750 billion to $1.7 trillion in 2032-2033 as future budgets are weighed down by commitments. links to defense spending, insurance programs and aged care.

Mr. Anthony warned that inflation around the world, especially in the US, will push global interest rates higher and put pressure on the Commonwealth’s currently near zero borrowing costs. There is pressure on Australia’s new government, to be elected next month, to set out a plan to cut spending.

“The best way to deal with this is to choose good policies now to avoid austerity,” he said.

However, according to S&P, in advanced economies, borrowing costs are expected to increase but are likely to remain at an acceptable level. Governments still have time to consolidate budgets and focus on reforms that stimulate growth. More worrisome is the risk of default in low-income countries.

Earlier this month, the International Monetary Fund (IMF) released a report called “Debt restructuring of poorer countries requires more effective coordination”. This is the 11th time this institution has spoken about the risk of default. The IMF estimates that low-income countries face fewer major debt challenges than they did 25 years ago.

“About 60 percent of the countries covered by the ‘Debt Debt Deferral Initiative’ (DSSI) are at risk or have already fallen into disrepair,” the report said. Currently, a total of 73 countries are participating in DSSI – an initiative led by the World Bank and the IMF that urged the G20 to be established when the pandemic first emerged, to help members defer debt payments.

Of the 41 DSSI countries that are at risk or already in trouble, Chad, Ethiopia, Somalia and Zambia have applied to study debt settlement options. About 20 other economies significantly breached the high-risk threshold. Half of them also have low reserves, increased financial needs, or a combination of the two by 2022.

“We are living in dangerous times. The world is faced with new uncertainties, as hostilities break out against the backdrop of a persistent and volatile pandemic that has dragged on for the third year,” the IMF said. price.

Domestically, difficulties revolve around the need for governments to restructure public debt while stabilizing the financial sector and maintaining growth. Externally, the diversity of creditors also poses coordination challenges.

Over the past few decades, DSSI countries have borrowed mainly from the Paris Club countries (the group of countries that are major creditors) and from private banks and multilateral institutions. Today, China and private bondholders play a much larger role as lenders.

The ratio of external debt of DSSI countries to the Paris Club decreased from 28% in 2006 to 11% in 2020. During the same period, China’s debt ratio increased from 2% to 18%. The proportion of Eurobond bonds sold to private creditors increased from 3% to 11%.

This leads to the fact that China will play a pivotal role in most of the debt restructuring activities of the DSSI countries. “The diversity of the composition of creditors requires more attention to the peculiarities of the country. Cooperation mechanisms will be key in all cases,” the IMF said.

In advanced economies, economic activity, spending and revenue are likely to return close to pre-pandemic projections in 2024. However, the situation in developing countries is even more worrisome. a lot of. Both emerging and low-income economies face persistent revenue declines.

Rising food and energy prices are adding pressure to the poorest and most vulnerable. Food accounts for 60% of the consumption needs of households in low-income countries. For low-income countries dependent on imported fuel and food, an inflation shock may require more subsidies.

“Now, the economic shocks from Covid-19 and the war in Ukraine are adding to the debt challenges facing low-income countries, at a time when central banks are starting to raise interest rates. “, assessed by the IMF.

The credit crisis was further aggravated by the decline in China’s offshore lending. Because they are facing solvency concerns in the real estate sector. This creditor also faced many other challenges and changes such as the anti-epidemic blockade, the transition to a new growth model; and issues related to existing loans to developing countries.

Other developing economies, such as Brazil and Russia, have actively raised interest rates in recent times to keep inflation in check. But in many countries, interest rates are still below the rate of price growth. Capital is still flowing out of emerging market stocks and bonds.

For low-income countries, the DSSI expires at the end of 2021. And the G20’s “Common Debt Settlement Framework” program has yet to be implemented. “Debt problems are growing and the fiscal space of developing countries will continue to shrink,” said Rebeca Grynspan, Secretary-General of the United Nations Conference on Trade and Development.

The IMF is calling on the parties to come up with options to help emerging and developing economies that are not eligible to join this “Framework”, but still benefit from the approach of global cooperation in the coming time. .

The organization also recommends that governments strengthen debt management and transparency. This will help countries manage risks, reduce the need for restructuring and deal more effectively and in the long term if debt shows signs of being unsustainable.

“The application of mechanisms to ensure coordination and trust between creditors and debtors has become urgent. Experience to date shows that greater clarity is needed on restructuring steps,” the IMF said. added.