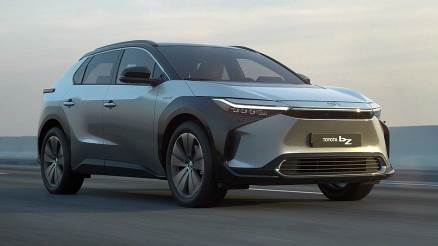 When the models of the future begin to appear. Notably, VinFast’s two electric SUVs promise to have an explosive debut at the most prestigious stage of the global auto industry – Los Angeles Auto Show 2021.

Currently, the Japanese “giant” has not officially announced the models that will debut at the LA Auto Show 2021. However, TheCarGuide predicts it will be the car. Toyota bZ4X 2022 running electric “in the flesh”, marking Toyota’s official “combat” in the electric vehicle market.

According to the production version of the bZ4X model revealed at the end of October, Toyota’s first electric crossover in cooperation with Subaru retains the same design as the concept and is inspired by the hammerhead shark. In terms of dimensions, bZ4X is 4,690 mm long, 1,860 mm wide, 1,650 mm high, with a wheelbase of 2,850 mm, equal to Highlander.

The power source of the powertrain comes from the “heart” with a capacity of 71.4 kWh, which can be charged to 80% in 30 minutes. bZ4X has a range of about 500 km according to WLTP standard with FWD version and 460 km with AWD version. Toyota bZ4X is expected to go on sale globally from mid-2022.

The new generation Ford Ranger of the “host” car company

The “host” car company has not revealed the model that will make its global debut in Los Angeles this November, but after Ford’s recent “tease” move, AutoBlog believes it will most likely be the world Ford Ranger. new system.

According to the latest revelations, the 2022 Ranger has a front-end design similar to Maverick and F-150 Lightning with C-shaped headlights. Notably, in the new generation, Ford offers a wide range of engine options and moves to electrification with a plug-in hybrid powertrain along with petrol and diesel engines. The PHEV version will combine a 2.3 I4 petrol engine with an electric motor. With an internal combustion engine model, Ranger 2022 uses new 2.0 I4 and 3.0 V6 diesel engines.

Engine selection is provided by Ford according to each market, especially the gasoline engine is produced exclusively in the US. In Vietnam, the Ford Ranger is considered unmatched in the pickup segment.

At the most anticipated international auto show of the year, the Korean giant plans to unveil the Hyundai Seven concept. To increase the heat before the official unveiling, Hyundai recently released some images revealing the design of the model expected to bring to the LA Auto Show 2021.

From the meager images in the teaser, it can be seen that Hyundai Seven owns a similar light system to two models of the same brand, Ioniq 5 and Staria. On either side of the front bumper corner, there are more vertical light strips. The Korean automaker calls this unique lighting system Parametric Pixels.

Inside the Hyundai Seven is an interior space that feels like the living room of a house. The car seats are covered with felt and designed like a family sofa. Hyundai revealed that Seven’s interior is made from sustainable materials, providing a refined, eco-friendly experience that reflects customers’ lifestyles.

As a new brand, the electric car company of billionaire Henrik Fisker is still considered a mystery of the market after announcing the luxury electric SUV Fisker Ocean to “fight” with the Ford Mustang Mach-E and Tesla Model Y. In August 2021, Fisker Ocean was voted by Hotcar as one of the 10 most anticipated electric cars on the street, next to the Roadster, Tesla’s Cybertruck and Volkswagen’s ID.5.

First announced since January 2020, Fisker Ocean is equipped with an 80 kWh battery pack, allowing the car to run a distance of 400 – 480 km. The car is equipped with a fast charging system, which ensures 80% full charge within 30 minutes.

After this year’s LA Auto Show, Fisker Ocean is expected to be sold for $ 37,500 from the end of 2022. This is considered a very competitive price because US customers also enjoy support from both the state and federal governments. state.

At LA Auto Show 2021, the Vietnamese automaker will introduce the super duo VF e35 and VF e36, marking the official presence in the US and other international markets.

The VF e35 and VF e36 belong to the D and E segment SUVs, expected to be equipped with batteries with capacity of 86 kWh and 95 kWh, operating ranges of up to 500 km and 550 km respectively according to WLTP standards. The two models are integrated by VinFast with advanced driving assistance features (ADAS) such as lane keeping assist, collision mitigation, driver monitoring, automatic parking, smart vehicle summoning… and are equipped with equipped with smart entertainment facilities such as voice control of the car with natural language, intelligent virtual assistant…

The VF e35 once appeared “in the flesh” during the event to visit the Pininfarina design studio in Italy in September. Not much information about the car was revealed after this visit, however, Reuters later confirmed that VinFast was “Vietnam’s answer to Tesla”. This may show that VinFast’s electric car model performing at the LA Auto Show is really worth looking forward to!

Along with the “launching” performance at the world’s leading prestigious auto show, the Vietnamese automaker set up an office in California and received a tax incentive of more than 20 million USD thanks to its sustainable investment strategy and creating created more than 1,000 jobs for the locality. According to experts, VinFast has chosen the right “golden time” to enter the US market when the administration of President Biden is expected to spend up to $ 174 billion to promote the development of electric vehicles.