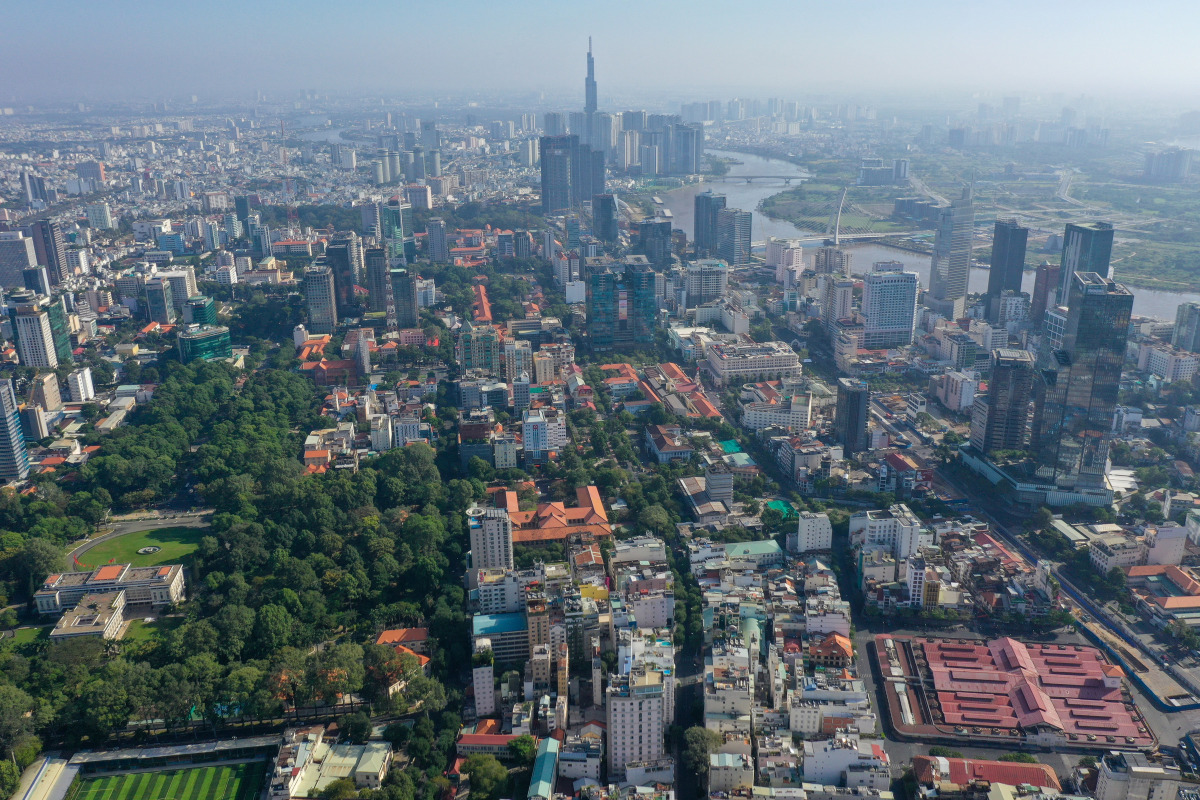 Ho Chi Minh CityThe ground floor of the commercial center in District 1 has a rent of 145.1 USD per m2 per month, but the rent in the suburban districts is 4 times lower, down 20%.

CBRE Vietnam has just released a report on the retail real estate market in the first quarter of 2022 in Ho Chi Minh City, recording a total supply of more than 1 million m2 of rental floors, with a strong division between the central area and the suburban district. Some commercial centers in District 1 have begun to have tenants return, but the level of recovery is uneven compared to the suburbs.

In the first quarter, retail space rents in areas outside the center of Ho Chi Minh City decreased by 10-20% compared to the previous year. The average rent for the ground floor and first floor of commercial centers in non-CBD districts is at $35.5 per square meter per month (rental price does not include service fees and value added tax). Meanwhile, the ground floor rent of commercial towers in the center of Saigon is up to 145.1 USD per m2 per month, 4 times higher than the rent in the suburban districts.

The vacant retail space in the CBD only fluctuated by a narrow margin of 3.5%, equivalent to 3,800 m2 without tenants. However, the vacant area of ​​the suburban area is up to 13.7%, equivalent to 131,300 m2, while the vacant area is approximately 4 times higher than that of the central area. The market recorded a significant decrease in the number of rental requests compared to before the epidemic and a sharp decrease in the food service (F&B), fashion and accessories industries.

Survey of VnExpress shows Many commercial towers in districts outside the downtown area of ​​Ho Chi Minh City are still reducing rents to increase occupancy rates. By the beginning of April, a shopping center on Nguyen Van Linh Street, District 7, still had a lot of empty space due to tenants paying for the premises from last year’s epidemic. The rent for retail space on the upper floors of this shopping mall is about 30-35 USD per square meter per month, the ground floor location is still twice as expensive as the upper floors.

At the commercial center on Nguyen Van Luong street, Go Van district (a district with a large percentage of immigrants in Ho Chi Minh City) also recorded a 15-20% decrease in the asking price of the premises. A shopping center on Cong Hoa Street, Tan Binh District also saw a 15-20% decrease in rent compared to the end of last year. Previously, the retail space at this shopping mall had a rental price of 30 USD per m2 per month, now the asking price has been reduced to 24-25 USD per m2, which can be negotiated for a softer price in the first 6-12 months. of the lease agreement.

Mr. Vo Hoang Quan, who has nearly half a decade of brokerage in retail space in Ho Chi Minh City, explained that most of the commercial centers that are reducing rental prices are in the central fringe districts and have a lot of space. drum. The current vacant premises are left by F&B tenants who left the market last year.

“The small and medium F&B brands that died 60% of the time when the Covid-19 pandemic broke out in the middle of last year had not yet recovered and were still cautious and considered when deciding to return to the market. Traders in districts far from the center are struggling to find tenants,” said Quan.

Meanwhile, according to Mr. Quan, the shopping centers with more favorable locations in the central core area of ​​District 1 are gradually reviving when welcoming tourists and shopping again. These commercial zones soon caught the eye of large-scale F&B brands, so there are not many promotions and discounts on space rental for retailers.

Ms. Pham Ngoc Thien Thanh, Deputy Director of Research and Consulting Department at CBRE Vietnam confirmed, Difficulties from the macro-economy are reducing the purchasing power of consumers in the short term, causing commercial centers in suburban areas to not be filled yet. This leads to a decrease in the asking price of retail space here that has not yet broken the circuit.

Ms. Thanh forecasts that the market is expected to “warm” gradually and recover in the last months of 2022. The number of shoppers gradually returns to crowded during the holidays and weekends, showing that consumers have caught up with the market. new normal operation. However, Ms. Thanh admitted that retail space rental demand is expected to be uneven across different commercial industry groups.

The bright spot of the market is that many large retailers are planning to accelerate their expansion. Typically, Uniqlo opened its 11th retail store at Saigon Center in Ho Chi Minh City, Nova Group implemented a series of plans to open new stores in March-April this year.

In addition, potential tenants of the retail market also come from AEON, with the goal of opening 100 AEON MaxValu supermarkets by 2025; BRG Retail cooperates to expand the Fujimart supermarket chain with Sumitomo Corporation with the goal of reaching about 50 new stores by 2028.

According to CBRE data, the supply of retail space in the period 2022-2024 in Ho Chi Minh City is expected to reach about 235,000 m2, but the construction of projects in the central area is still delayed. Leasing activity of new commercial centers is still quite slow because retailers tend to be much more cautious than before in expanding rental space.