The picture of the global petroleum market – VnExpress Business 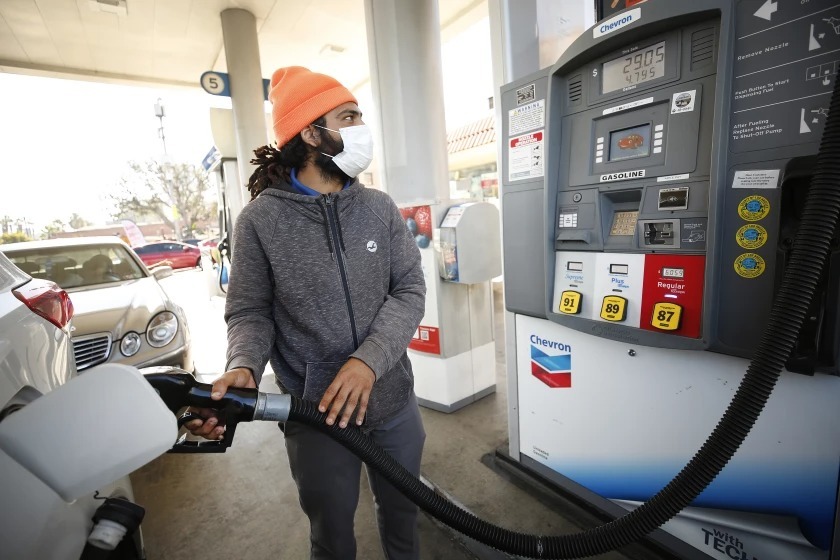 The Russia-Ukraine conflict and Covid-19 in China caused oil prices to peak in 14 years, supply was tight and gasoline prices peaked in many places.

In the first half of this year, the world crude oil price was continuously subject to many great fluctuations, from Russia’s opening military campaign in Ukraine, the US and Europe imposing sanctions on Moscow to China’s blockade of major cities to fight back. Translate.

Oil prices have been going up since late last year, as demand recovered to near pre-pandemic levels, while supply failed to keep up. Speculation about the possibility of Russia opening a military campaign in Ukraine also appeared in mid-January, further contributing to the price increase.

Brent started the year at $78. By February 24, when the Russian-Ukrainian military conflict officially broke out, the price was close to 100 USD. The market then began to increase vertically, at one point increasing by 18% in just a few minutes, to 139 USD a barrel on 7/3 due to news that the US was about to ban the import of Russian oil. This is the highest price since 2008.

The situation then reversed rapidly. The price of Brent oil fell 30% in just one week, to less than $100 on March 16, thanks to expectations that Saudi Arabia and the United Arab Emirates (UAE) would increase oil production. Besides, demand from China is also forecast to decrease due to blockade orders in major cities to prevent Covid-19.

The market then continuously went up and down because of the information that the US released its oil reserves (April 1), China eased its blockade, decreased supply from Russia or the European embargo on Russian oil. Since the beginning of the month, the price of Brent has stabilized around $120 a barrel – the highest since 2012. WTI is also around this mark.

Goldman Sachs forecasts that the average Brent oil price in the third quarter of this year will rise to $140. The average price in the second half of the year and the first quarter of next year is $135 a barrel. The reason is that global oil reserves, OPEC production and refining capacity are currently very low.

According to data from the US Energy Information Administration (EIA), in 2021, worldwide oil production (including crude oil, biofuels) will reach 95.57 million barrels a day. In which, the top 10 oil producing countries contributed 72%. The US is the leading country with 18.88 million barrels a day (accounting for 20% of the world), followed by Saudi Arabia and Russia.

Meanwhile, the International Energy Agency (IEA) report for 2021 shows demand again to reach 97.5 million barrels. Asia – Pacific and the Americas are the two regions with the largest consumption volume, surpassing others.

Demand increased again after the pandemic, while supply did not keep up, is the reason why oil prices began to increase at the end of last year. This situation is still ongoing. The IEA warned in March that the world was facing the risk of the biggest supply crisis in decades. “The opening of Russia’s military campaign in Ukraine has put energy security back on the agenda of countries, amid record fuel prices,” the report said.

The IEA said that in April, Russian oil pumped to the market decreased by 950,000 barrels per day compared to February. Russia is the world’s largest oil exporter, selling 8 million barrels of oil and oil products per day to customers. goods globally.

European and North American countries have for many years turned to clean energy. Therefore, they are very reluctant to increase oil production to alleviate the current energy crisis.

OPEC and its allies (OPEC+) have also long struggled to maintain output targets, let alone increase, mainly due to technical and capacity issues. Last month, they pumped up to 2.8 million barrels less than their target. Therefore, OPEC + agreeing to increase production in July and August does not make much sense.

Besides, analysts believe that Russia’s sanctions by the West have not created many fluctuations to the global oil supply. It just causes the oil flow to change direction.

Accordingly, instead of transporting oil to European countries, Russia will boost shipments to other markets such as China, India and Turkey. In return, those countries will buy less oil from the Middle East, leading to increased oil flows from this region to Europe.

Gasoline prices in many parts of the world accelerate

The average price in the US now exceeds $5 a gallon, the highest to date. However, this price is only in the middle of the world.

According to Global Petrol Prices, the place with the most expensive gasoline in the world is Hong Kong, with more than 11 USD a liter of gasoline. Filling the gas tank of a small car here can also cost more than 100 USD.

East Asia is home to the second most expensive gas in the world, after Europe. Prices in India, China, South Korea and Thailand – major oil consumers, but do not produce much – range from $1.4 to $1.6 a liter.

Meanwhile, countries in the group of large oil producers sell gasoline to people at a cheaper price than bottled countries, such as Venezuela, Libya, and Iran. Each liter of gasoline here costs only 0.02 – 0.05 USD.

Other places where gas is cheap are North Africa, the Middle East, Central Asia and Russia. In Algeria, the price of gasoline is only about 0.3 USD per liter. Meanwhile, this figure in Russia is 0.9 USD.

How do countries keep gas prices down?

Increasing gasoline prices will have a great impact on consumer psychology. Some countries choose to stabilize the market with subsidies, such as Iran, Saudi Arabia, Malaysia,…

For example, the price of gasoline in Malaysia is currently about 13,000 VND per liter, thanks to the government subsidy of this country. This country does not levy taxes on gasoline consumed domestically, sold to indigenous people.

Iran is also among the top countries that subsidize energy (oil, coal, electricity, gas) the most in the world, according to IEA data. In 2020, the country spends more than 28 billion USD on energy subsidies, of which 5 billion USD is for oil.

Meanwhile, many countries choose to release stockpiles or reduce taxes to lower fuel prices. The US has been draining its oil stockpiles since April, at a rate of one million barrels per day.

South Korea extended the period of fuel tax reduction, and continuously raised the tax reduction in the past few months, from 20% to 30% in May and to 37% on June 19.

In South Africa, the government in May extended the petrol tax reduction policy currently at 1.5 rand ($0.1) a liter until the beginning of July. From June, the country’s Energy Ministry dropped an amount. The administration tax is currently at 0.1 rand per liter for 95 petrol. They are also proposing to reduce the price of base fuel by 0.03 rand per liter in the coming months.

In mid-May, Thai Prime Minister Prayut Chan-o-cha announced an extension of the reduction of excise tax on diesel fuel for another two months. Besides, from May 21 to July 20, the consumption tax on B5 diesel oil will be reduced by 5 baht per liter, up from the old level of 3 baht. The previous tax rate was 5.99 baht per liter.

Reducing taxes is also a way many states in Canada chooses to keep fuel prices down. In April, the Ontario government announced a plan to reduce gasoline taxes by more than 5 cents a liter in the last 6 months of the year. In March, the Alberta government also announced that it would not collect fuel tax (currently at 13 cents a liter) if the price of WTI oil is above $ 90.

In addition to tax cuts, the Thai government is also considering support for the most affected fuel user groups. The South Korean government plans to provide assistance to those experiencing an increase in the cost of living due to high fuel prices. Meanwhile, the one-time subsidy for low-income families in the Netherlands increased from 200 euros to 800 euros.