The mystery of Quang Ninh’s underground Recently, the Daily Mail – a prestigious magazine in the international press, published on the bottom of the East Sea, near the Hoang Sa island of Vietnam at a depth of 300.89m has the deepest “death” hole in the world. , makes many people interested, the interpretation of underground geomorphology is different.

In the early spring of Canh Ty, a reporter of Construction e-newspaper took notice and collected unknown things underground in Quang Ninh, where there are sea and islands like Hoang Sa. An old friend is an old cadre of the 9th Geological Federation, the first class of geological engineers trained in the former Soviet Union to work in coal mines, the bottom of the sea has a pit of “death”. is normal. So is geomorphology on land under water.

The death hole is easily understood as the stratigraphic collapse, formed from water pockets, underground rivers, underground carter, or uninhibited artificial underground structures, causing underground cancer. , when self-fatigue, subsidence For example, after underground coal mining, after taking the coal underground, you must bury it again (called the furnace insertion method). The problem when coal mining finished, the mine owner just closed the field, leaving the ground empty.

At the bottom of the water in Ha Long Bay, there used to be a deep hole in the shape of a “death” hole, the mystery has remained to this day. Specifically, before 1960, in the Ba Cua area, the military port lock (Brigade 170) in Ha Phong ward (Ha Long) had a huge sinking well, about 60 meters in diameter, blue-black water did not mix with the color blue. seawater. In the middle of summer, the sea water here is cold, sitting on the side of a large boat near the circle’s mouth still has hair on the back of her neck because of the cold air emitted from it.

Ba Cua lagoon, Ha Long bay, belongs to Ha Phong ward, where the “death” hole was exposed at the bottom of the water.

Traditionally, this is a large cave gate of sea monsters deep in the ground. A cave gate on the bottom of this water, a cave mouth on the top of the mountain is called Deo But, the rocky mountain range borders between Ha Long city and Cam Pha city. Part of the cave door was exposed on the mountain, the local people called “Lo Phong”, a village of San Diu people at the foot of the mountain took the name of the cave and named the village, Lo Phong village.

The cave entrance on the mountain (Lo Phong) hides many mystical spiritual stories. The villagers at the foot of the mountain consider this open-air cave entrance as a sacred object of heaven. The god of Pha Dinh and the temple of the royal citadel of Lo Phong village have passed down: “Lo Phong” was screwed, so the village had buffaloes, cows, pigs, chickens, and sick people. Severe people were mute, the chickens could not crow, and their crops failed.

The day the French colonialists opened National Highway 18 over Deo But, the road was lined with the entrance of the cave (the entrance of the cave was about 3m wide, 4m high), the police let concrete pour through the mouth of the cave, and had to leave a hole as big as a cot. land in the middle of the road. In our time, many times of extensive repair, lowering the foundation of Deo But slope, still left the hole “Lo Phong”, no one dared to cover it, called “Co Tien’s navel”.

Buddha Pass is a high rocky mountain bordering between Ha Long city and Cam Pha city, there are caves that eat underground into the sea. 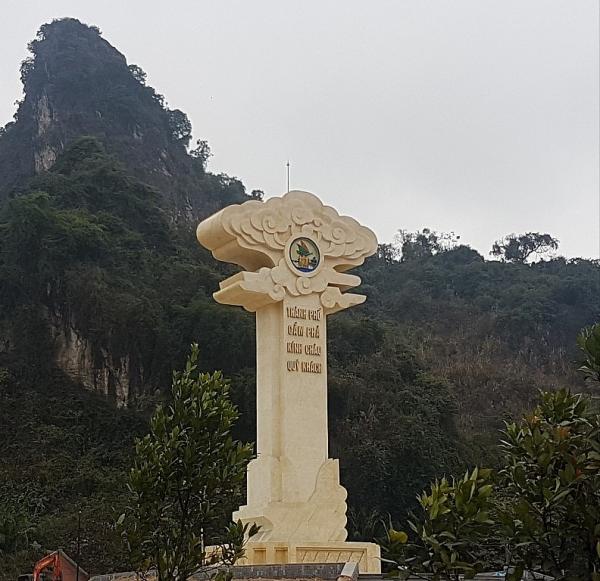 I wonder how deep, shallow, and wide the cave “monster” is satisfied and what is inside … because no one has come to explore. In fact, when throwing an orange-sized rock at Co Tien’s navel, listening to her navel, only seeing the rock hitting the cave wall and the wind blowing, not hearing the falling point, probably very deep. The local people also said that when they tested, they poured a basket of grapefruit into Co Tien’s navel. One week later, there was no shortage of grapefruit in the sea of ​​Ba Cua. Currently, the project of upgrading Highway 18, the road level is low and far from the cave entrance, but the people of belief still set up a shrine, incense temple to worship at the entrance of the cave.

The heart of National Highway 18 is now lower than the cave entrance, the villagers of Lo Phong village still respectfully set up a shrine called Co Tien umbilical shrine. Quang Ninh, underground contains many interesting things, information may still be in the geological documents, it may have been excavated but not published, or long-term documents do not use rotting. Geological Federation 9 explores coal with Geological Team 37 to explore water in Yen Tu forest, they once discovered a large lake deep underground in the area of ​​Lan Thap, Vang Danh (Uong Bi). This underground lake is over 1,000 meters long and 70 meters wide. In 1970, a water navel subsided in Mieu Than village, swallowed up the bamboo bushes up to 20m high, only the bamboo top was still sticking out of the pit (now traces still remain).

In 2012 – 2013, Cam Pha city kept having mysterious death holes. The locality has asked the Geological Institute of the Vietnam Academy of Science and Technology to identify the cause and propose solutions to overcome this dangerous situation. Project manager, TS. Tran Quoc Cuong said: The sinkholes occurred in Cam Pha city due to the Northwest – Southeast fault system. At the intersection of these fault systems, surface water flows through the fissure formed by the fault, causing underground erosion of the material to create a large void causing slump. Besides, the fluctuations of ground water, geological and hydrological structure are also one of the causes of soil collapse. 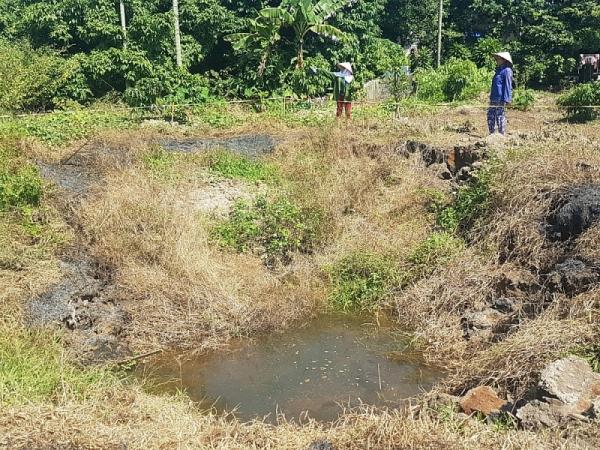 On the night of March 2, 2016, the “death” hole opened its mouth right in the cultural house of zone 5, Ha Khanh ward, Ha Long. 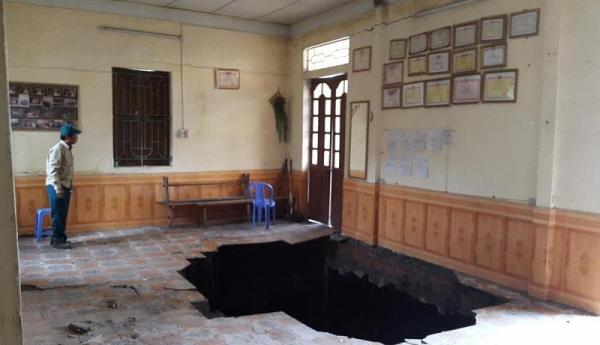 Mr. Dao Ngoc Ky – Chairman of the Board of Cau 75 Company at that time said: The unit had to use more advanced technology, re-explored at a deeper, wider depth, to know that the depth was innumerable but the carter cave. . There are foundation piles through 5 floors of the cave, with a depth of 15-16m. Cau 75 Company had to adjust the design and construction solution, change from the bored pile with the diameter of 2m to the diameter of 1.2m, at the location of the caster cave, it was necessary to treat the crank pipe so that the concrete would not flow into the cave. .

Returning to the story of the “death” hole at the bottom of the water of Ha Long Bay, the local old people at that day said that the “death” hole was a hole of death (because it was a big one, it was said to be a god) and said it was a cave of a sea monster. Monsters have caused many disasters for fishermen in this sea.

In the past, many boats and children were mysteriously lost, including witnesses such as Truong Thi Luu, over 80 years old this year, in area 3 (Lo Phong), Ha Phong ward. Mrs. Truong Thi Luu, born in a fishermen family, followed her mother to the Ba Cua river creek when she was a child to get fresh water into the boat, only for a split second but lost her mother. The lost child was brought up by an aboriginal person, and changed his surname to a local. Only later did Mrs. Truong Thi Luu find her home, in a fishing village along the river Chanh (Quang Yen).

There are tragic stories, still inherited from the temple at the foot of the limestone mountain range in front of the Ba Cua River, called the Dau Dau Temple, to worship the princess. According to legend, the lady is two orphaned sisters, father and mother, local people. When the tide was low, the women went down to Ba Cua beach to shake hands, shrimp and shrimp on the shore, somehow they got lost. When the tide rises, the sea is immense, the sister does not see her return. The next day the water receded, went down the tide to find you … oh my! Next to the large hole was only a basket, marking where she lay and a large pile of mud piled up. My instincts told my sister, I was dragged by the monster’s arm down this deep hole and pinned me down on the beach, when the tide swept my soul away forever. The older sister loves me most, every night she goes to the sea door to mourn and one day she can’t come back. The next generation said that the two sisters died young, so sacred, they set up a temple to worship right at Ba Cua (called the temple to worship the two ladies), but still incense is still blowing. 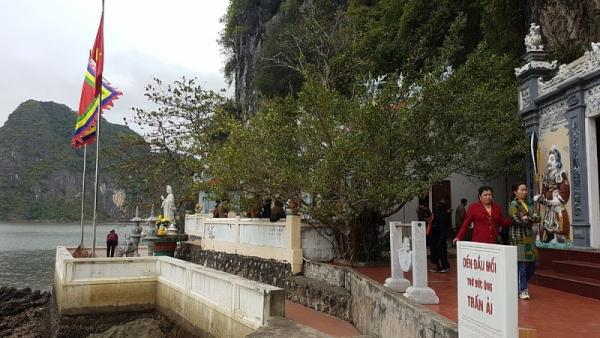 God hole in the water bottom, since the construction of the port, the ship dredged the ship lock, the channel … now the naked eye can no longer see the cave entrance. But the cave clears the bottom of the water, apparently still having an influence on the ocean currents. Ba Cua, the tidal area has unusual features, when the water up and down is more intense. Water flowing from three estuaries, intersecting three currents with high elevation, fast-flowing water up and down is very dangerous for ships and boats to pass. Especially in the past, the marine engine industry had not yet developed, the boats and boats up and down had to rely on wind and current. When boats and boats come here, they often have to let go of the anchor, wait for the water to flow. When they stop, they will be a shrine to worship the lady.

Legend has it that when Van Don commercial port developed, Tran Trieu prospered, a merchant far and near, restored, built the temple of the more prominent female and dedicated to worship His Holiness, Tran Ai, Son Than, Tho. Location … and worship Buddha. The more thrilling the temple is to worship the princess, the more thrilling the “death” hole in this sea, the more famous the head temple is as the sacred temple on Ha Long Bay. On the occasion of the festival at the beginning of the year, the people of the sea often pay the festival to pray for security at the gate of the Head Temple and Ba Men Temple.

Quang Ninh in the development trend, on the forest under the sea where it is urbanized, needs to hold in hand the cultural values ​​left by the ancients. The mysteries in the earth must be revealed under the foundations of eternal buildings.

The mystery of Quang Ninh's underground