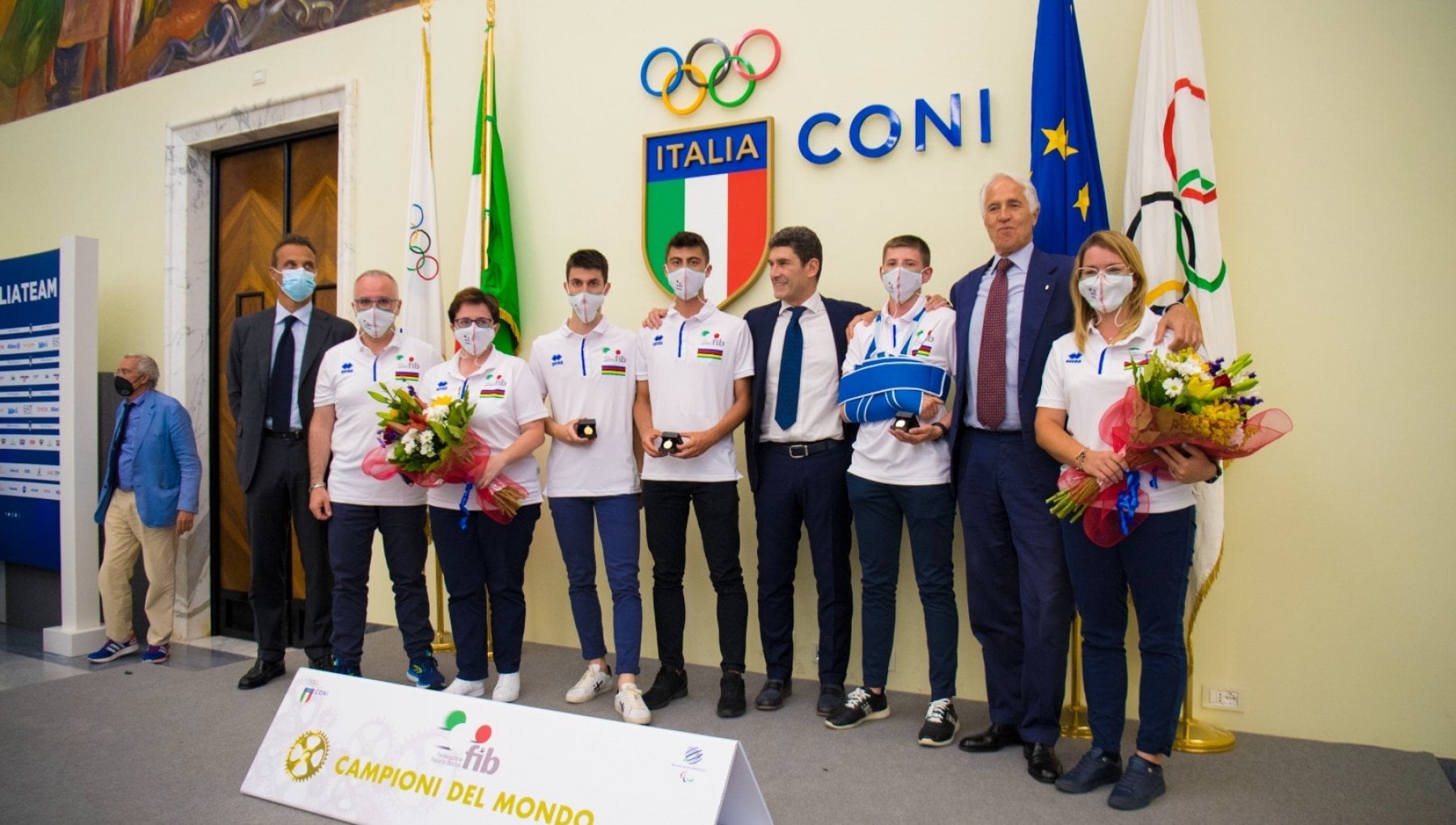 The Italian Bocce Federation made a fine show of itself in the Coni Hall of Honor, seat of the Federal Council on June 15 and, before the political moment, with the award ceremony of the reigning World Champions, who won the world title from 2017 onwards.

Eight world champions (two from Raffa and six from Volo), wearing the rainbow polo shirts of the new technical sponsor Erreà, were awarded under the attentive gaze of the CONI president, Giovanni Malagò, and the Secretary General Carlo Mornati.

Proud of his athletes and his sporting world, the president of the FIB, Marco Giunio De Sanctis.

The proceedings began with the screening of two videos: one promoting the sport of bowls in all its specialties and the other launching the World Championships of Flight, scheduled in Alassio from 11 to 16 October 2021.

“It is a pride for the Italian Bocce Federation to be present with its management components in a place of such great historical value – began the president De Sanctis – Bowls are a sport for everyone, which includes many specialties and, therefore, a discipline complete. The awarding of our World Champions demonstrates how our top athletes are, for the most part, young, without distinction between men and women. An extraordinary discipline that, together with the Federal Council, I am trying to relaunch, giving back to the sport of bowls an image that is not distorted, but suited to its principles and high contents. In terms of image and communication, a great deal of work has been carried out in order to subvert the old clichés, restoring the aspect that is due to the FIB ”.

“Bowls are not part of the program of the Olympic Games – the words of De Sanctis – We pay for a policy that is not uniform at an international level, not suited to the guiding principles of Olympism. We will get back to work, with the help of President Malagò, who is well aware of how our sport has always enriched the Italian medal table “.

To do the honors, in the Hall of Honor of the Coni, the president Giovanni Malagò, who underlined how “the FIB, thanks to the president Marco Giunio De Sanctis, a volcanic executive full of ideas, is fully present in this such an important moment for the whole movement. It is impressive to see what lies behind this Federation ”.

“The peculiarities of the sport of bowls are there for all to see – continued Malagò – It is a Paralympic discipline and, therefore, it must soon become Olympic too, it has a multidisciplinary connotation in the same place of competition, men and women are equally considered, according to the guidelines of the IOC and CONI, sporting activity embraces all generational groups, from children up to the fourth age. And this is his true and great strength with an incredible multigenerational ability together with the whole social aspect of this discipline “.