The golden house is rich in Than Tai day 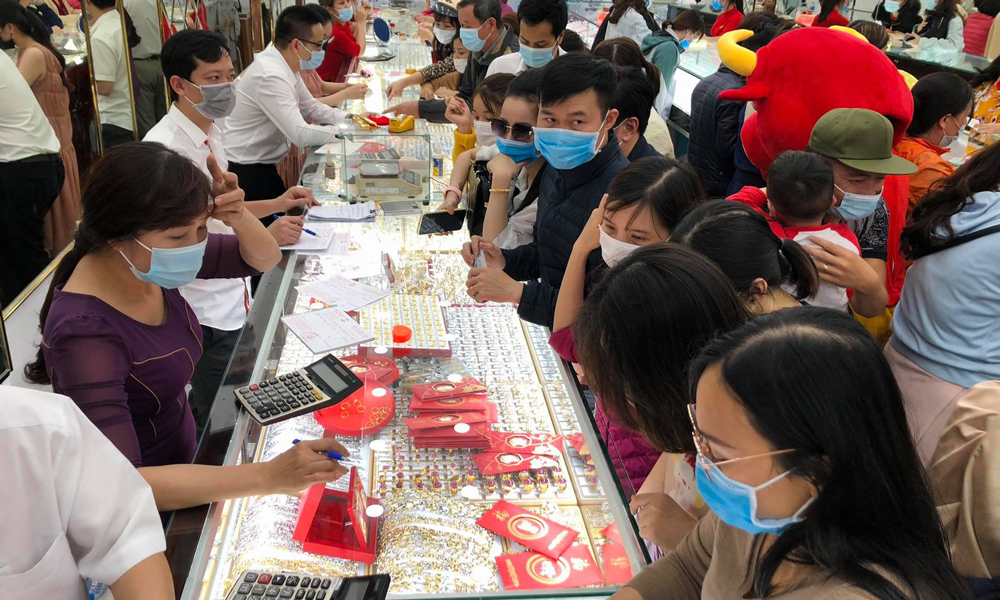 In the afternoon, there was a large gold store that still had nearly a hundred people waiting to buy. The leader of a business also said “this year, the visitors came to many more than expected”.

As noted by VnExpress, At the end of the afternoon on the day of Than Tai, the shops on Tran Nhan Tong and Cau Giay golden streets … were more crowded than in the morning. At a store owned by some big brands, customers have to wait in line for more than half an hour.

At 3:30 pm, Minh Duc (27 years old) and his friends went to three big gold shops such as DOJI, PNJ, Bao Tin Minh Chau on Cau Giay Street (Hanoi) but still could not buy a smooth round ring. “When I go to every store, the staff tells me that I have no 1 or 2 gold rings. Only gold bars, 5-thread rings or buffalo-shaped gold, genius, gold-gold …”, Mr. Duc said.

Some people have to look to smaller brand stores to buy plain rings or to save the wait. After nearly 2 hours of searching, Mr. Duc bought a second plain ring at a store on Nguyen Huu Huan street for nearly 11 million VND. “The staff said this was the last plain ring at the store,” he said.

As explained by some customers, they prefer smooth round rings that are both easy to store at the beginning of the year and easy to store, regardless of the year, so they think to keep prices better.

The representative of Phu Nhuan Jewelry Company (PNJ) confirmed that from 15:00 today, many products for this occasion such as half-gold Than Tai gold, 2,500 sets of 3 limited edition Xuan Phu Quy gold pieces … have run out clean products in the whole system while the demand for customers to buy is still great. “Many customers who cannot buy the gold piece of fortune have turned to gold jewelry. Some stores also run out of Taurus pendants,” he said. Shops remain open until 11 p.m. with other products.

Recorded from DOJI’s centers and shops nationwide, especially Hanoi and Ho Chi Minh City, shows that the number of customers who transact until 16:00 is still very large. Due to the huge demand from customers, the DOJI system is continuing to deliver goods to the centers to meet the need to own a few gold threads on Than Tai day.

In Ho Chi Minh City, judging that the purchasing power has decreased sharply because of the disease, the owner of a gold shop in Ben Binh Dong, District 8, said that this year, he imported only a little bit of gold Than Tai and Kim Nguu. However, by the end of the morning, everything was gone. “The price of each piece is higher than 180,000-200,000 VND due to the processing cost, but customers still love it,” she said.

Many gold shops on Nguyen Huu Hao Street, District 4 (Ho Chi Minh City) were also filled with customers at 6pm, making the parking lot full. Many people bought gold rings because the store informed that they were all of the Than Tai gold bars. The owner of a small gold shop said that this is a rare phenomenon because there are few years when the crowds last until the evening and all the gold is sold as this year.

Share with VnExpressMs. Nguyen Thi Kim Oanh, Chairman of Sacombank Company – SBJ said: “Never a year like this year, SBJ has not produced in time to sell. Since yesterday, visitors to SBJ stores in Hanoi and Ho Chi Minh City are very with enough demand from small to large numbers. “

Mrs. Kim Oanh said that the products of Than Tai, the golden buffalo mascot, Tan Suu Cat Tuong, fortune bag, and the golden lake weighing 10 or less are selling very well – can be said to be “out of stock”, SBJ must increase production of more products for timely delivery to customers.

Contrary to the initial worry of people “afraid” of buying gold due to the Covid-19 influence, the number of visitors to the store exceeded the expectation of the Chairman of SBJ. Ms. Oanh said, has not finished “business season Than Tai” but since yesterday, the number of visitors visiting the store is 5-6 times higher than the previous year. SBJ’s revenue in just two days is estimated at 400 billion. In this year’s Than Tai season, the company has also prepared a 20-30% increase in the amount of gold from the previous year.