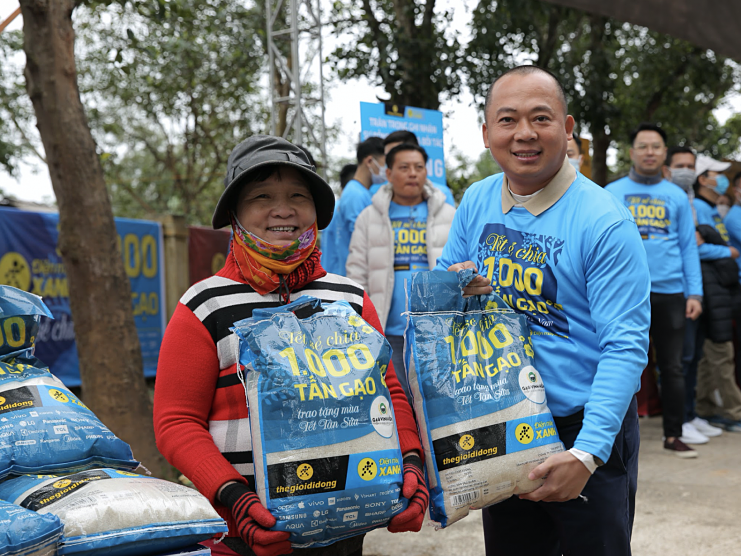 The Gioi Di Dong launched the program “Tet sharing” to give 1,000 tons of rice to 50,000 poor households nationwide, from January 13.

The representative of Mobile World said that 2020 is a difficult year for people across the country because Covid-19, storms, floods and droughts, salinity damage people’s lives and economies. Therefore, this enterprise determined that this Tet holiday should take actions to share concretely and practically to everyone. The promotion program with 100% bills will be refunded “fresh”, direct discounts on each product to make Tet shopping burden lighter. In addition, each bill is deducted from 5,000-10,000 VND to form a 1,000-ton rice fund, given to families in need to help have a better Tet.

This business also connects with dozens of global partners such as Samsung, LG, Sony, Panasonic, Toshiba, Oppo, Vivo … to join hands in a program of humanitarian significance. “Sharing Tet – Donating 1,000 tons of rice” creates a great spread not only in the number of recipients but also in the number of participating units.

Mr. Doan Van Hieu Em – CEO of Mobile World shares, after 16 years of doing business with many achievements, this business wants to share what it has to the community.

“These actions are simply from the heart, the spirit of sharing. Although the gift of value is not too great, we believe it is practical and meaningful in spirit, promptly encouraging families to overcome difficulties. Happy New Year and a brighter new year, “said Doan Van Hieu Em.

Previously, on the occasion of Tet in 2020, Dien may Xanh also carried out the campaign “Flexible rice – Warm kitchen” to present 10,000 rice cookers to disadvantaged people in 40 provinces nationwide. At the same time, during the historic flood of the central provinces, Dien may Xanh and Gioi Di Dong also launched a non-profit sale to support people to rebuild after the flood. This company accompanied LG to donate VND 1.5 billion to Operation Smile, bringing full smiles to children with cleft palates. These activities demonstrate the compassionate tradition and humane sharing culture of Mobile World.