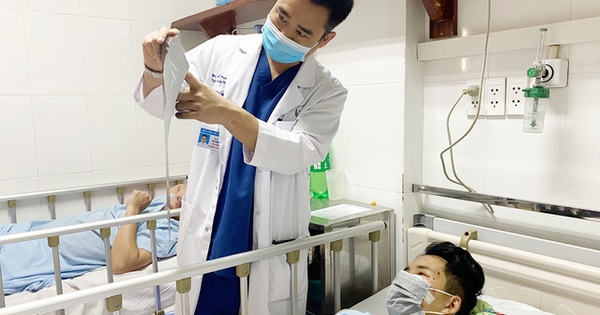 On March 4, Viet Duc Hospital said that the hospital has just received a case of a patient LVC (20 years old, in Lai Chau province) hospitalized due to a motorbike accident. iron bar face piercing.

According to the patient’s family member, while riding a motorbike, LVC suddenly fell into the iron bar of the roadside fence. The patient must remain motionless because his face is pinned to the fence and wait for the local hospital doctors to bring the machine to the saw out of the fence, then transfer the patient to the state of being pierced by a sharp iron. to Viet Duc Hospital (Hanoi).

The patient was hospitalized in a state of being stabbed through the face by an iron bar- Photo: Thao My

Conducting interdisciplinary consultations to assess the position of the foreign body, doctors determined that the iron bar of the barrier pierced from under the left eye, through the nose, sinus sieve, through the eye socket and the top of the right eye socket. Then, through the medial floor of the skull into the right temporal lobe of the brain, the iron bar penetrates the brain organization, only about 5 mm from the inner carotid artery, the main artery supplying the brain with blood. If the internal carotid artery is damaged, it is difficult for the patient to sustain a life.

In addition, at the top of the iron bar located in the brain, there is a sharp hook, the risk when withdrawing from the patient’s head will cut into the brain blood vessels, causing serious danger to life.

The patient was promptly admitted to the circuit intervention room with the participation of a team of general practitioners: Neurology, facial and eye shaping, imaging diagnosis, and resuscitation anesthesia. With a system of modern vascular intervention machines, taking blood vessels in 3-dimensional space, accurately determining the position of the foreign body related to the cerebral vessels, the foreign body is drawn and observed directly on the screen. 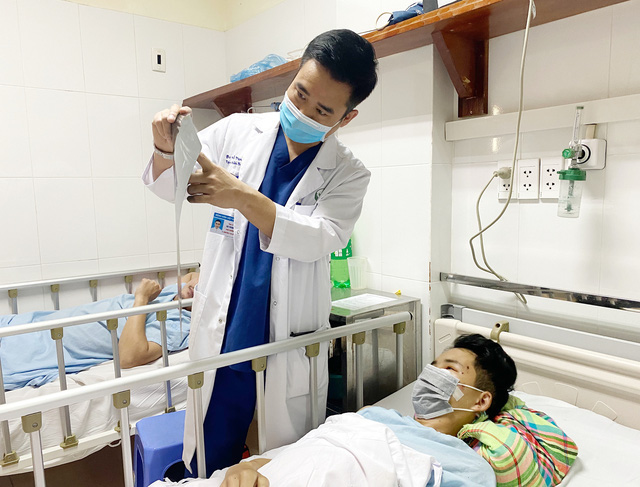 Doctor Vu Trung Truc, who directly operated on removing the foreign body from the patient’s face, said the team was really nervous and only sighed after successfully withdrawing the foreign body for the patient. Thanks to modern equipment, the coordination between specialists, after 2 hours of surgery, the operating team has removed the iron rod from the face and minimized the risk of brain vessel damage to the patient.

According to doctors, for this patient, due to a puncture wound into the brain parenchyma puncturing the meninges, it can cause cerebrospinal fluid leakage. 2 days after surgery, the patient has not appeared CSF and is continuing to be monitored, and at the same time antibiotic treatment to limit the risk of infection due to iron rod.

With eye injury, now two eyes are clearly visible, the right eye has a collapse of the eyelids and paralysis. It is expected that, after stabilizing, the patient will be transferred to an eye hospital for continued treatment.