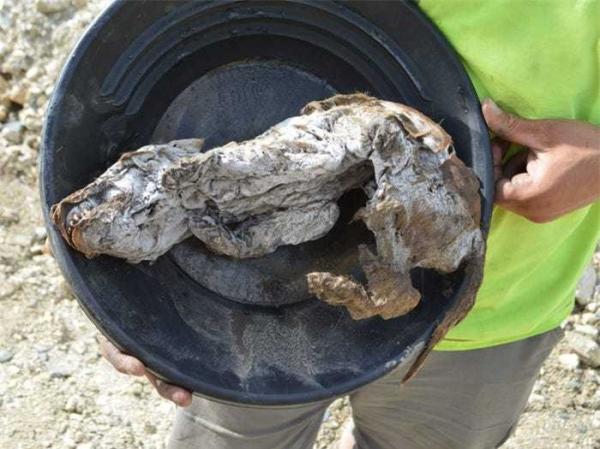 The body of the 57,000-year-old wolf dog is still quite intact, deep in the ice in Canada.

A gold miner in Canada’s Yukon found 57,000-year-old female wolf bodies in melting permafrost. This is believed to be the most complete wolf mummy ever found.

The wolf’s fur, teeth and soft tissue were intact, the body lacking only eyes. The researchers believe that the puppy about 7 weeks old died after the cave collapsed.

The wolf remained intact because it was buried under the frozen ice. The body would remain virtually unchanged over the next several millennia.

Julie Meachen, professor of anatomy at Des Moines University said: “The body is quite complete with all soft tissue, feathers. This is a very rare finding. Since the body is quite intact, we can understand. more from its short life “.

Julie Meachen’s group named the dog Zhùr, which means wolf in the vernacular. Researchers have harvested clues like how Earth was in that era, or can learn about how ancient wolves lived and what their food was.

Meachen and her colleagues X-rayed Zhùr’s skeleton and analyzed samples of the dog’s hair and enamel. They found that the animal’s bones were still not fully developed, estimating it was only 7 weeks old when it died. Body is only 30 cm longer and weighs more than 650g.

This is a female wolf because the organ is perfectly preserved. The only parts that Zhùr is missing are his eyes.

“The eyes are so soft that it’s the first thing that decomposes when an animal dies,” Meachen said.

By analyzing traces of minerals in puppies’ tooth enamel, the researchers discovered that Zhùr may have been weaned and that a wolf family’s diet included fish, possibly salmon from the nearby Klondike River. .

The team also compared Zhùr’s DNA with that of modern wolves. They found that the mummy was related to ancient gray wolves that once lived in Eurasia, as well as modern gray wolves from North America.

It was unusual to find intact animal mummies in the Yukon according to Meachen. Furthermore, Meachen predicted that the young wolf’s death was due to the collapse of the cave.

It is possible that the wolf mother and Zhùr’s sisters were outside the cave when the collapse occurred because wolves often give birth to several young cubs per litter.

Discoveries like these are likely to become more and more intense as Earth’s temperature continues to rise. As the planet warmed, the permafrost – the ground in the northern hemisphere that remained frozen year round began to thaw. As it melts, ice age creatures like Zhùr, buried for tens of thousands of years, are starting to be excavated.