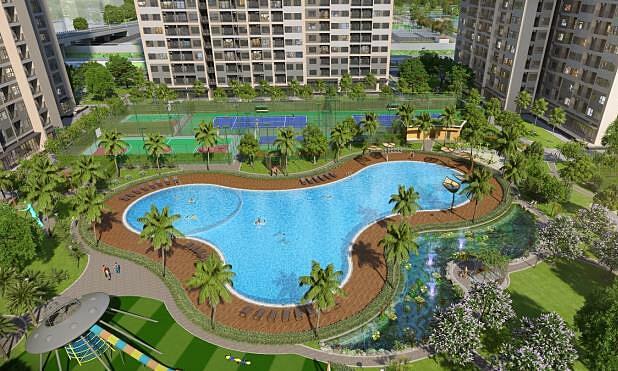 The subdivision inherits the system of the most beautiful internal landscape in the city, including: an outdoor swimming pool up to 1,000m2, a sports field, a children’s playground, a landscape garden …

Located at the intersection of two Le Trong Tan streets – Thang Long Avenue, the location of Grand Sapphire helps to connect convenient traffic, making it easy for residents to move to important locations of the capital. In the future, Metro Line 5 comes into operation, bringing the advantages of connectivity and the potential to add value to the apartment.

Recently, Vinhomes launched preferential policies on selling prices and financial support for the first court to open for sale in the Grand Sapphire subdivision. For example, customers pay 10% to immediately sign sale and purchase contracts, take up loans up to 70% with a period of 35 years; Pay principal and interest of 0 VND for 2 years and give a voucher to buy a Vinfast car up to 200 million VND …

In recent years, the “changing flesh” of the infrastructure along with the movement of offices, the West area is gradually becoming the new administrative and economic center of Hanoi. Along with that, the situation in the central areas is overloaded, causing congestion, pollution … forming the trend of moving from real estate to megacities with full utilities and systems. modern transportation system.

“Vinhomes Smart City owns a synchronous utility system and the intersection of two arterial roads of Le Trong Tan and Thang Long Avenue, so that the newly opened apartment building – Grand Sapphire 2 at the project attracts attention. ideas of investors and real buyers, “said the investor.