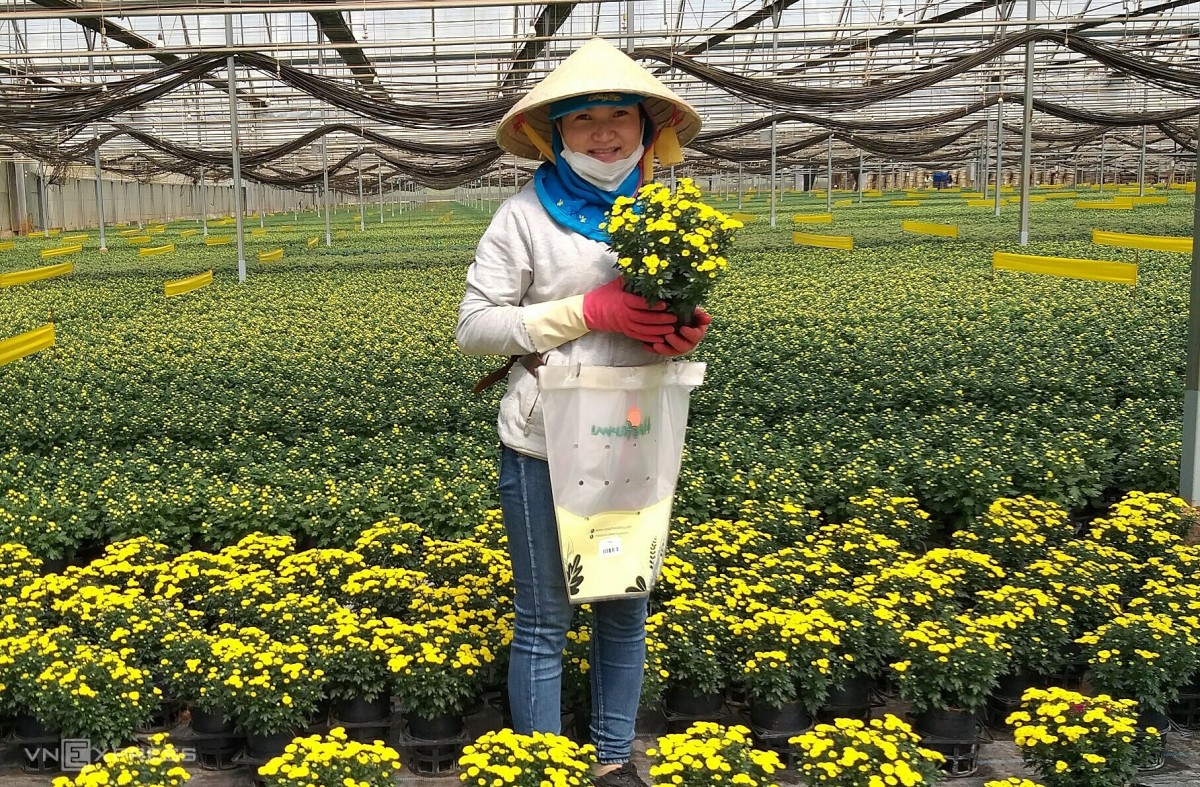 The price of Tet flowers at Dalat gardeners this year increased 10-20% over the same period last year due to expensive planting costs, but still very attractive to customers.

Nhung, the owner of a flower garden in Da Lat, said that this year, she has supplied to the market about 1 million roses and carnations to serve the Lunar New Year. The wholesale price is 5,000-15,000 VND per stem (depending on the type), an increase of about 10-15% compared to the same period last year.

“The amount of Tet goods my garden supplied to the market this year only increased by about 2% compared to last year. Many varieties could not be cultivated as planned because of the impact of the disease”, Ms. Nhung shared.

Also supplying to the market in the same quantity as last year, Mr. Tuong, the owner of a flower garden in Lam Dong, said that there are about 5,000 small pots of chrysanthemums that have been ordered by wholesale customers very early. “This year, the supply of flowers is small, so no matter where the flowers are produced, the clues are all there,” he said.

As the largest flower supplier in the country – accounting for 20% of the flower supply for the domestic market – Mr. Aad Gordijn, General Director of Dalat Hasfarm Co., Ltd., said that this year the company will prepare 10 million branches. flowers, 1.6 million pots for the Chinese New Year market in 2022. This number increased by 20% compared to the same period last year.

“The average selling price of the company’s flower products in the three weeks before Tet increased by about 10-15% compared to normal days. We are completing orders signed with partners,” said Mr. Aad Gordijn.

He also said that this year was affected by Covid-19 but since November, the purchasing power of flowers in the market has increased again. The number of customers ordering flowers increased by 25% compared to the previous one. His company expects that during the 2022 Lunar New Year, the purchasing power of flowers will increase by about 20% compared to last year.

The reason for the increase in the price of Tet flowers, Nhung said that the cost of caring for and investing in flowers this year increased by 20% compared to the previous year. In particular, the impact of the epidemic makes the flower cultivation stage more passive and difficult to transport, which pushes up the cost.

According to the leader of the Economic Department of Da Lat city, this year, growers have difficulty in traveling and preparing materials for sowing. Especially, the cost of materials and labor to grow flowers increased by 15-20%, many fertilizers increased by 50%. Therefore, the price of flowers this year increased more than every new year to help growers make a profit.

In Da Lat, the total area for growing flowers of all kinds for the 2022 Lunar New Year market of the city is 745 hectares. In which, the area of ​​chrysanthemums 260 ha, rose 95 ha, gladiolus 5 ha, lily 30 ha, carnation-salem 200 ha and some other flowers occupy 85 ha. According to statistics of this locality, the output of cut flowers reached nearly 1.4 billion branches, up 3.9% over the same period in 2021.