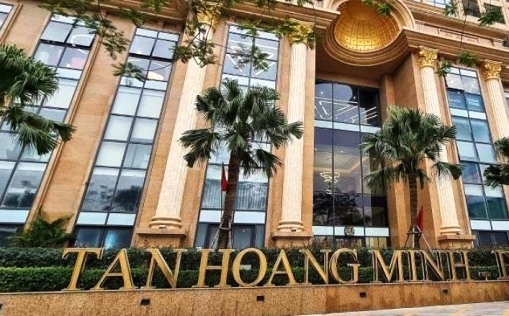 2,100 billion has been transferred by Tan Hoang Minh to C03’s account at the State Treasury, but investors still do not know when they can receive it.

Representatives of Tan Hoang Minh Group and investors have just had new discussions regarding the refund of canceled bond lots. The meeting took place after nearly a week of Tan Hoang Minh’s temporary closure of the headquarters.

Mr. Vu Dinh Luyen, Deputy General Director of Tan Hoang Minh, said that this group and the Police Department for Investigation of Crimes on Corruption, Economic and Smuggling (C03, Ministry of Public Security) have recovered and transferred about 2,100 billion VND. VND to the custody account at the State Treasury. This number exceeded their expectations by 20%.

It is expected that in July, the group will arrange about 50-60% of the bond sales that it has raised from investors. “Tan Hoang Minh is still actively transferring the project,” said Mr. Luyen.

However, according to the representative of Tan Hoang Minh, one of the most difficult difficulties today is the absence of senior leaders of the group to jointly solve the current work, due to being detained.

Before asking for an immediate payment of VND 2,100 billion to bond buyers, Mr. Luyen said the corporation wanted this but “has not received the guiding document of C03”.

In early April, the State Securities Commission announced the cancellation of 9 bonds of Tan Hoang Minh with a total issuance scale of more than 10,000 billion VND. More than two months from the date of cancellation, investors continuously went to Tan Hoang Minh’s headquarters to demand money for buying bonds. Many people even went to the Ministry of Finance and the Securities and Exchange Commission to request support measures and guiding documents.

In the previous meetings, investors repeatedly asked Tan Hoang Minh to pay immediately according to the ratio when the money was recovered. Even investors proposed Tan Hoang Minh many other solutions, including buying back apartments in their current project instead of refunding.

Under pressure to demand money from customers, Tan Hoang Minh said that he had sent an official letter to C03 twice to propose a payment plan, but so far there has been no response.