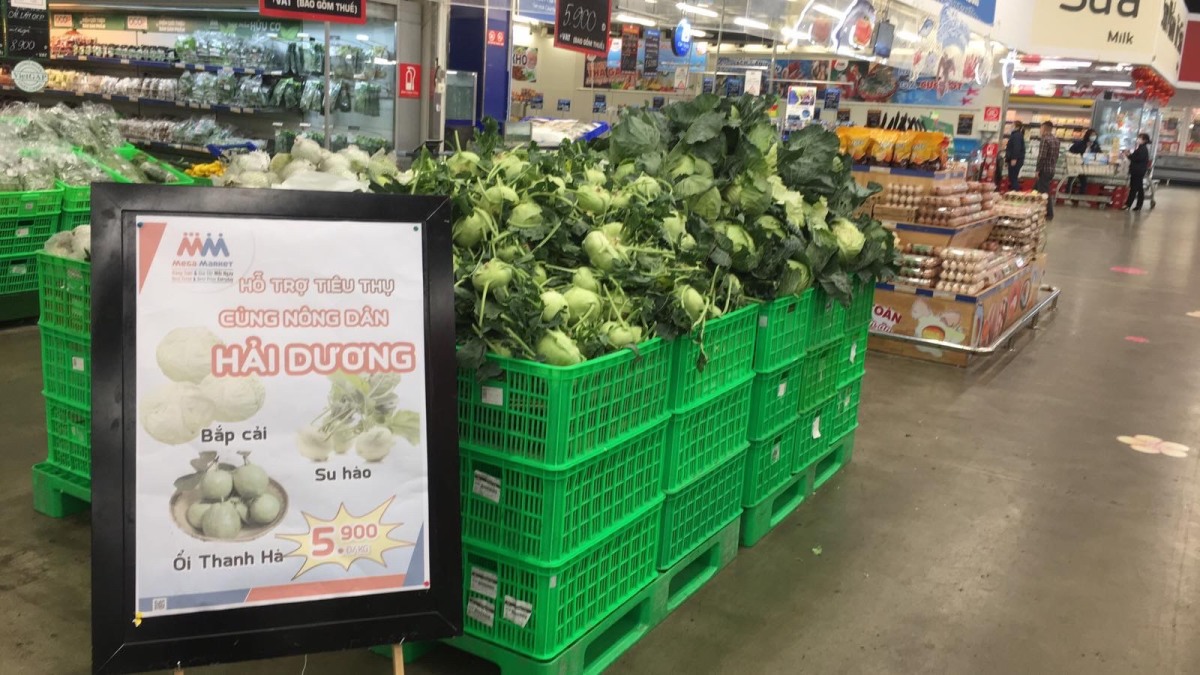 On the afternoon of February 22, many supermarkets said they had transported and sold agricultural products from Hai Duong.

MM Mega Market said that the first batch of agricultural products were sold at supermarkets in Hanoi. 1-3 days later, the goods will be on sale in Da Nang, Ho Chi Minh City. On February 19, this company ordered 24.3 tonnes of kohlrabi, cabbage and guava. MM Mega Market expects the output of each shipment from Hai Duong to Hanoi about 5-6 tons, with a frequency of one trip per day. For HCMC and Central, it is expected that there are 2 rescue shipments per week with a total output of 70 tons.

Vinmart this afternoon also confirmed to sell agricultural products imported from Hai Duong such as tomatoes, kohlrabi, carrots, cabbage, and guava. Without disclosing the volume of imported goods, this company only gives an estimated consumption output of 70 tons per week.

The Ministry of Industry and Trade in a recent report to the Prime Minister also informed about the retail systems participating in the rescue of Hai Duong agricultural products. In addition to MM Mega Market and Vinmart, Central Group has purchased about 100 tons of vegetables and fruits a week, and is expected to double the amount of goods.

Because of Covid-19, the transportation of Hai Duong’s goods met difficulties when many neighboring localities did not receive the goods. This locality has issued many documents “calling for help” from the Ministry of Industry and Trade, neighboring provinces and cities for goods to be circulated. Hai Duong side said that there is an inconsistent understanding among localities about measures against Covid-19, leading to the implementation causing difficulties for the people and enterprises of the province.

To solve the problem of goods circulation, the Ministry of Industry and Trade proposed to the Prime Minister to direct the Ministry of Health, Agriculture and Rural Development, and Transport … to agree on a number of issues such as traffic guidance. safe goods, measures to prevent epidemics in transport, logistics, how to confirm that goods and agricultural products are safe from diseases … The Ministry of Industry and Trade also proposed, provinces with Covid-19 should be supported. testing, in order to maximize the needs of the contingent of drivers and escorts.

For localities, the Ministry requests to accept test results Covid-19 of the operator of a means of transport coming from the epidemic zone of the testing unit designated by the health sector. In addition, the epidemic and neighboring localities actively contacted and worked with experienced provinces and cities (Lang Son, Thua Thien – Hue, Tay Ninh, Quang Nam, …) to organize models of safe transportation and circulation of goods in accordance with their actual conditions to ensure effective prevention of epidemics …

Before that, while waiting for the local traffic to transport Hai Duong goods, many volunteer groups joined together to rescue agricultural products. However, spontaneous selling activities on the sidewalk later did not receive support from the authorities when the danger of epidemic diseases was still hidden.

According to Hai Duong’s statistics, there are 90,760 tons of un-consumed agricultural products, including 4,080 ha of vegetables coming to harvest with 3,205 ha onions, 621 ha of carrots and 261 ha of cabbage, kohlrabi, cauliflower, leaf vegetables.