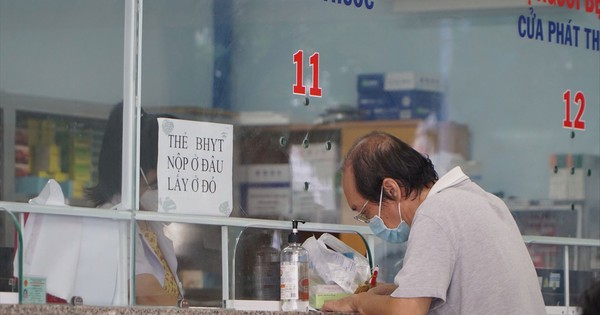 Explaining the sudden shortage of drugs, Dr. Pham Thanh Viet, Head of the General Planning Department – Cho Ray Hospital (HCMC), said that the missing drugs were in the group negotiated by the state, not by the government. tender hospital. Recently, the National Drugs Central Shopping Center announced that it has not been able to negotiate, so there is no medicine.

In addition, procurement of drugs in public health facilities must comply with the forms of bidding as prescribed. If the drug fails to win the bid, the hospital will not be able to supply the drug as prescribed and the insured patient has to buy it outside. Before 2018, social insurance paid directly to patients, then changed to Cho Ray Hospital to pay for patients and social insurance to pay back to the hospital. However, from 2018 to now, the insurance agency has not done this anymore. According to Doctor Viet, as soon as there was a shortage of health insurance drugs for kidney transplant recipients, the hospital’s director identified this as an emergency.

According to the Department of Health of Ho Chi Minh City, a big challenge for the city’s health sector in the current period is to come up with solutions to proactively prevent shortages of drugs and medical supplies at medical examination and treatment facilities. sick; Public hospitals under the Department of Health also have to be ready to receive patients from provinces and cities transferred due to serious illnesses and even due to a lack of some drugs and medical supplies when localities are slow to organize bidding. according to the law.

The Department of Health has taken a number of solutions to ensure the timely supply of drugs and medical supplies in the near future, including: Advise the city’s leaders to allow the health sector to set up a centralized shopping center for drugs and medical supplies. medical equipment, industry equipment. Currently, the Department of Health has developed a project and submitted it to the City People’s Committee for consideration and approval. The center will operate according to the roadmap at the initial stage of concentrated drug procurement, and after stabilizing, it will purchase medical supplies and equipment. Talking to reporters NewspapersWorkers

, Mr. Le Thanh Dung, Director of the National Center for Centralized Drugs procurement, said that this unit is conducting centralized bidding for more than 300 drugs on the national bidding list, including many brand-name brand-name drugs. . It is expected that by the end of June, the unit will complete the centralized procurement of drugs.

Explaining the shortage of drugs and medical supplies that put a heavy burden on patients, Prof. Dr. Nguyen Anh Tri – Member of the 15th National Assembly, Chairman of the Vietnam Association of Hematology and Blood Transfusion, former Director of the Institute of Hematology and Central Blood Transfusion – primarily because the medical industry is in a “storm” because of the scandal of the procurement of test kits/tests from Viet A Technology Joint Stock Company, leading to a series of medical staff at all levels being prosecuted and investigated. This “storm” also affects the thoughts and feelings of medical staff, especially those working as managers and leaders.

“An incomplete procurement process has resulted in many mistakes. That is, the legal corridor for procurement, even for medical services, is still incomplete, inappropriate, and unsecured. That’s why the appraisal team and their units don’t do it anymore, so the Ministry of Health, the agency that finally approved it, was almost frozen after a series of recent incidents” – Prof. Tri commented.

Assoc. Prof-Dr. Nguyen Lan Hieu, Director of Hanoi Medical University Hospital, said that the Bidding Law currently has but decrees and circulars specific to the health sector that are slow to promulgate or the guiding documents are still inadequate. difficult to understand and apply. This has made hospitals hesitant in purchasing consumables.

Some other opinions believe that the current shortage of drugs is mainly due to the complicated centralized bidding process for medicines, nearly 20 steps must be followed, involving many authorities, each A few days late, even 1, 2 weeks leads to slow bidding results.

Dr. Nguyen Huy Quang, former Director of the Legal Department – Ministry of Health, said that the current regulations on bidding prices must be equal to or lower than the winning bid prices of the previous 12 months, which were announced in any locality. of the same type makes it difficult to implement. This is a rigid regulation that does not take inflation into account. Especially in the current context, after the Covid-19 epidemic, many supply chains were broken, raw materials increased, and gasoline prices increased, leading to an increase in all goods and services…

Dr. Quang said that agencies, ministries and branches need to have an overall assessment of the bidding situation, including the difference between bidding for drugs, consumables and medical equipment to identify them. right problem. At the same time, there must be more specific guidance documents than the Law on Public Property, the Law on Public Investment, the Law on Bidding, etc. “There should be separate regulations for the health sector, because this is a conditional business that directly affects the health sector. This will help the health sector to have a transparent and clear legal mechanism for the units participating in the bidding to feel secure,” – Mr. Quang stated.

In response to information about drug shortages at medical facilities in Ho Chi Minh City, on the afternoon of June 20, the city’s Department of Health said that the unit had worked with attached hospitals and medical centers to listen and exchange information. drug supply situation. The Department of Health also explained the reason for the shortage of some drugs. Specifically: With some drugs on the list of rare drugs, the shortage is because there is no supplier due to production cessation. Recently, a few drugs have been interrupted due to the conflict between Russia and Ukraine or because the registration number has not been extended but has not been extended by the Ministry of Health… Besides, hospitals in the area are also affected. Actively involved in the procurement of drugs on the list of price negotiation and national-level centralized bidding (this work is performed by the National Center for Centralized Drug Procurement according to regulations). In addition, a number of new drugs have arisen because last-level hospitals have deployed new and specialized techniques such as drugs for oncology, hematology, etc. Most of them do not have registration numbers, mainly. is imported every year after being licensed by the Ministry of Health. Along with that, a number of small-scale medical examination and treatment establishments, lack human resources to participate in drug bidding as prescribed, have no experience in procurement (such as district health centers; hospitals; district, small-scale district)…

The Department of Health proposed that directors of hospitals and medical examination and treatment facilities strengthen inspection and supervision of compliance with treatment regimens in prescribing at their units. The Department of Health organizes inspection teams on drug supply management activities of hospitals and professional activities of drug and treatment councils related to drug supply as mentioned above.

Consider reimbursement for patients On the morning of June 20, at a nationwide online meeting on health and disease prevention, Deputy Prime Minister Vu Duc Dam emphasized that there should be no shortage of drugs, equipment and medical supplies; The resolution of difficulties in procurement and bidding is not only by administrative orders, but must be solved by flexible measures, especially in centralized bidding. On the basis of gathering all local problems in procurement and bidding for drugs, equipment and medical supplies, the Ministry of Health urgently worked with the Vietnam Social Insurance, the Ministry of Finance, the Ministry of Planning and Investment. for immediate disassembly text. The Vietnam Social Security Administration is aware of the payment situation for cases where patients have to buy drugs and medical supplies themselves during treatment. “The drug bidding needs to be further accelerated at both central and provincial levels in the spirit of not being short of supplies and drugs. The Ministry of Health focuses on solving specific problems and clarifying responsibilities for the public good. common work, for the sake of the sick, not to lack medicine, supplies and medical equipment” – Deputy Prime Minister requested. Deputy Minister of Health Do Xuan Tuyen pledged that after receiving complaints from localities and medical facilities about difficulties and obstacles in the process of implementing procurement and bidding, the Ministry of Health will work with the Ministry of Health. relevant ministries and branches to coordinate in adjusting, supplementing and removing.