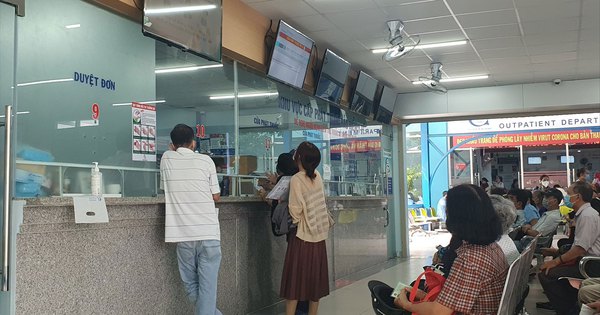 After completing the discharge procedure for her child, Thao, 35 years old, in Thu Duc City, Ho Chi Minh City recalculated the amount of money spent after a week of hospitalization. She said, her 5-year-old daughter had a cough continuously for many days, seeing that her situation was not good, she took her to a district hospital in Thu Duc City. Here, her daughter was diagnosed with pneumonia and had to be hospitalized for treatment. However, the doctor informed that the hospital currently lacks some supplements and cough medicine, so he will prescribe it for her to go out to buy.

“I take care of my child alone, there is no one at home, so every day I have to carry my child 4-5 km to buy medicine, one day he was so tired I had to ask the nurses to take care of me. After a week, I The cost of medicines bought from outside is more than 1 million dong,” said Thao.

According to Dr. Tran Van Khanh, Director of Le Van Thinh Hospital (Thu Duc City), currently the hospital basically has enough drugs to provide patients. But the Dopamine drug used in the emergency room is not often enough, the hospital borrowed it from other units, but it also did not have it. Therefore, doctors replaced with Nor-Adrenalin in combination with Dobutamine to vasopress the patient, but the mechanism was different, so the effect was not equal. Dr. Khanh said there was a shortage of this drug due to a supply cut, which is the general situation of the whole country.

Dr. Khanh added that the hospital lacks a number of small supplies because it is not on the list of medical supplies of the Ministry of Health, the hospital has to replace it with other types.

At Thu Duc City Hospital, before that some items were not enough to meet the needs of patients, many patients with health insurance cards had to go out to buy medicine. The shortage of drugs at the hospital in the field of treatment has greatly affected patients, but the prevention side has also been “contaminated”, leading to many difficulties in epidemic prevention activities.

At the Central Eye Hospital, in the past 1 month, patients with indications for vitreous replacement surgery could not be performed because the hospital did not have a reserve lens. In addition to scheduling patients to operate at another time, the hospital has performed temporary laser treatment for patients with cataracts.

According to some doctors, currently small supplies can only be purchased directly, but large ones are required to wait. In case of extreme urgency, the patient should be transferred to another medical facility where they have enough supplies for the patient to receive timely intervention.

It is noted from the fact that due to the influence of the case of Viet A Company and the lack of synchronization in the legal regulations, the bidding, procurement of drugs and medical equipment is being delayed or even stopped. stagnation.

Lack of medicine for fear of testing!

The director of a district hospital in Ho Chi Minh City said that drug shortages do happen, but only at certain times. At the beginning of the year, this hospital had a shortage of some drugs, and soon after the bidding was completed, it was enough to provide patients. He explained that the main reason for the shortage of drugs was the bidding process. Specifically, during the period when the Covid-19 epidemic occurred, many hospitals focused on fighting the epidemic, so they forgot to build a list of drugs and medical supplies to submit to the Department of Health. Since then, leading to the hospital not being able to bid on time and lack of medicine.

In addition, in principle of bidding, the hospital must choose the lowest quotation unit, then make a dossier and send it to the department for approval. The approval period lasted for several months, during that time the market situation had many changes, such as the recent increase in gasoline prices, which led to an increase in other prices, of course, the price of drugs also increased.

“So, when the dossier is approved to select a drug supplier, the price is already at a different level. It is very difficult for the hospital” – this person said.

On the afternoon of June 17, at the announcement on the actual status of bidding, procurement of drugs, supplies and medical equipment, the Ministry of Health admitted that there is currently a shortage of drugs and medical supplies in many places. mainly common medicines and medical supplies under the purchasing authority of localities and units, affecting medical examination and treatment and people’s health care.

According to the Ministry of Health, the main reason leading to the shortage of drugs and medical supplies is fear, fear of making mistakes, fear of being inspected and tested. of some localities and units, although the Ministry of Health and the People’s Committees of provinces and cities have decentralized procurement authority, and assigned autonomy and self-responsibility to the units.

Some localities assigned units to take the initiative in bidding themselves, instead of centralized bidding as before, but the units were still confused or afraid in organizing the implementation. Some businesses and suppliers are also afraid to supply goods to public entities due to unreasonable prices, complicated and difficult bidding procedures and payment procedures. Procurement in the medical field sometimes comes from passive demand, depending on factors such as epidemic situation and disease patterns.

Especially 2020-2021 is the two years heavily affected by the Covid-19 pandemic, many bidding packages must be purchased in the form of shortened appointment of contractors, selecting contractors in an emergency to serve the needs of fighting against the COVID-19 pandemic. Translate.

According to the Ministry of Health, another reason is the understanding and implementation of Decree 60/2021/ND-CP dated June 21, 2021 of the Government stipulating the financial autonomy mechanism of public non-business units. The authority to decide on procurement from revenue sources of public non-business units that are assigned financial autonomy has not been unified, leading to a delay in bidding and procurement of public non-business units. organizing the bidding for selection of contractors to provide properties, goods and services since this Decree takes effect. In addition, the expiration of the registration number of some drugs leads to a delay in bidding compared to the planned schedule.

Regarding the bidding, procurement of drugs, medical supplies and equipment, the Ministry of Health directs the heads of the units to be responsible for the procurement and bidding of drugs, supplies and equipment. health care facilities according to their competence and according to the provisions of law, ensuring that there are enough drugs, supplies and equipment to serve the people’s health care needs. It is recommended that government leaders at all levels strengthen the direction, inspection and supervision of non-business units under their management in the locality. There are specific measures to assign heads of public non-business units to take responsibility if there is a shortage of drugs, chemicals and medical supplies in service of medical examination, treatment and prevention. translate for people in the area.