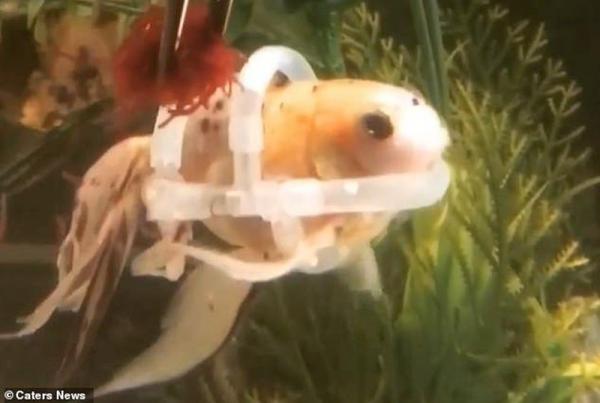 A goldfish has an incurable floating disorder. The animal could not swim as usual, but could only face the surface of the water as if dead.

The Daily Mail recently reported on an unhappy fish with a floating disorder, a disease that prevents the animal from swimming as usual, but only on its stomach up to the surface of the water as if dead. This condition is not considered to be treatable.

“The owner of the fish brought it and asked for our help. The goldfish has a floating disorder. To help him swim in the water we designed a special life jacket, ”said Stacey O’Shea, Executive Director of The Garden Sanctuary.

The life jacket is made of plastic pipes made of polystyrene (a flexible material). These plastic pipes connect together and use a mini air circulation device to help the goldfish balance its body in the water as usual.

Caring Stacey even changes the polystyrene periodically, cutting it into different sizes so that the fish can swim in different aquifers and areas of the tank.

A video of the fish happily swimming in a life jacket went viral after it was posted online, most of which expressed interest and admiration for the fish’s owner’s heart when witness these images.

“The owner must have loved it very much. That is why the goldfish can get help from us, ”Ms. Stacey said.

Ms. Stacey also revealed, “wearing” a life jacket for the fish is very easy and does not make the fish hurt. Now, with a special life jacket, the goldfish can swim freely without having to face the water all day as before.

Strange disease makes the goldfish have to wear ... life jackets