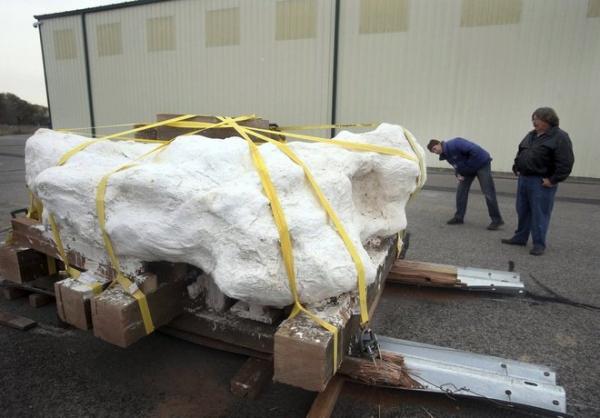 Scientists believe that the 9-ton stone block has “sealed” a series of extremely ferocious “beasts” at the same time.

According to AP, the mysterious rock was discovered from the Cedar mountain formation, belonging to the Arches National Park in Utah, USA from about 20 years ago. In 2013, the rock was brought to Wasatch Front to restore the fossils from the rock. Currently, it is preserved in a garage in Salt Lake City due to lack of funding.

Scientists are calling for funding to continue research when they recently found clear evidence that the 9-ton rock contains the fossils of dozens of dinosaurs.

Accordingly, not only a femur, a tibia, a lower jaw were exposed near the surface of the rock but there were about 20 other “beasts”, possibly incomplete, intertwined deep inside. This is considered one of the largest dinosaur discoveries in this state.

“The discovery is definitely one of the greatest things I’ve ever seen in my career,” said Don DeBlieux, an expert at the Utah Geological Survey.

Paleontologist, geologist James Kirkland believes that the rock contains fossils of many species of the dinosaur Utahraptor. This is a small but extremely ferocious predatory reptile.

Geologists concluded the rock was originally a pool of quicksand. It was possible that an unfortunate herbivore was trapped, dying in quicksand, then a swarm of Utahraptors arrived to “take care of” the ill-fated animal.

As a result, the whole herd got bogged down. After 136 million years, the quicksand fossilized into a block of rock weighing 9 tons, hiding within itself all the ancient creatures it “captured”.

It is known that the Utah Geological Survey did not have the budget for a long time to continue separating fossils from rocks. To date, most of the cost to process the rock has come from local scientists and individuals interested in paleontology. Until May, if funding cannot be raised, the disposal of the rock is likely to be suspended for a long time.