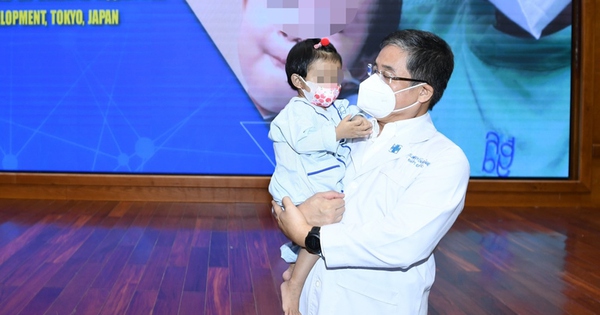 The first time in Vietnam, a kidney transplant without the same blood type

In 2020, Mr. VVB (54 years old, living in Ben Tre) discovered that his body had many abnormal manifestations. When he went to the hospital to check, he was determined by doctors to have end-stage renal failure. Treatment efforts were unsuccessful, the patient had to undergo hemodialysis.

The first husband and wife to donate and transplant a kidney without the same blood type in Vietnam.

In the countryside, every time he goes on dialysis, he has to go from 5 am, come home at about 5 pm. After a year of dialysis, his health deteriorated much. When he was found to have kidney failure, he also signed up for a kidney transplant. The brother is compatible and can donate a kidney for a transplant, but when the doctor checked, his health was not guaranteed, so he had to wait for another hope.

Fortunately, Cho Ray Hospital is in the process of implementing a national project on incompatible kidney transplantation. Around the beginning of December 2021, after going through many screening, testing and health checks of Mr. B’s wife, Mrs. Tran Thi H. (51 years old, living in Ben Tre), the doctors said the indications The number is completely suitable for the first kidney transplant without the same blood group in Vietnam.

Having been discharged from the hospital and re-examined on January 21, the health of both Mr. B. and Mrs. H. has recovered very well. The husband after the kidney transplant was able to eat and walk normally and live on his own.

Associate Professor, Dr. Thai Minh Sam, Head of Urology Department of Cho Ray Hospital, said that to perform the transplant, the hospital sent experts to study abroad, mastering techniques to prevent the creation of produce antibodies to prevent rejection, administer drugs, and remove antibodies from the blood by plasmapheresis. “For kidney transplants on people with the same blood group, if not handled professionally, the patient will increase the risk of transplant rejection, possibly losing the transplanted kidney, possibly even affecting life,” said Dr. Sam emphasized.

New technique of heart surgery in the South

BSCK2 Nguyen Thai An, Head of the Department of Resuscitation – Cardiac Surgery at Cho Ray Hospital, said that in previous coronary surgeries, usually patients would be operated by sawing the sternum in the middle. The disadvantage of this method is that the patient will lose a lot of blood, cause pain, and take a long time to recover.

New surgical technique instead of sternal saw, doctors will only make a small incision, about 5-7 cm in the patient’s left chest and then will perform coronary artery bypass. Cho Ray Hospital has performed the same technique many times, but only built one coronary bridge. And this is the first time a patient has had 2 coronary bridges done by this method at Cho Ray Hospital.

New technical heart surgery was first deployed in the South

The new surgical case is Mr. LVN (62 years old, living in Dong Thap province), who discovered he had coronary heart disease a long time ago. 12 years ago, the patient had stents placed in the anterior left interventricular arteries, the circumflex artery, the right artery… Later, 2 of the stents were gradually blocked, the possibility of re-intervention is almost could not be performed, forcing the doctors to perform open surgery.

At the end of 2021, Mr. LVN was admitted to Cho Ray Hospital with angina in his chest, limited mobility due to blocked arteries and a high risk of death if early intervention was not carried out. “At that time, I felt like I was kicked on my chest. It was very painful!”, Mr. N shared.

At the Department of Resuscitation – Cardiac Surgery at Cho Ray Hospital, after being examined and diagnosed, the patient was operated on by taking a segment of the internal thoracic artery and connecting it to a left descending interventricular branch. This is the most important coronary artery in the heart, which is fed by a bridge of arteries. At the same time, the patient also underwent a second coronary bypass surgery, taking a vein in the leg to connect to a marginal branch on the left side. The incision is very small and does not cause much pain. Currently, Mr. N. has stabilized his health and has been discharged home.

According to Dr. Thai An, coronary artery bypass surgery is a difficult surgery, especially for cases where no solution is used to paralyze the heart. Especially, in this case of surgery, besides the skill and experience of the surgical team to make small incisions and limit pain, the doctors and nurses are also supported by many modern monitoring devices. such as esophageal ultrasound, endoscopy…

“Patients with coronary artery occlusion and stenosis should go to the hospital so that doctors can examine and intervene as soon as possible. At that time, the patient’s heart has not been severely ischemic, has not been dilated, the The heart chambers have not grown, the heart muscle has not thinned… The sooner the patient arrives, the more options doctors will have to choose from and help the patient recover soon,” said Dr. An.

Save people from cow’s heart

More spectacular is the case that was saved by doctors of Binh Dan Hospital in Ho Chi Minh City by promptly replacing the infected abdominal aorta with bovine pericardium, a biological material used for the first time. used in abdominal aortic reconstruction in Vietnam. Dr. Dr. Tran Vinh Hung, Director of Binh Dan Hospital, said that in the days leading up to Tet, the hospital successfully performed the second case of arterial replacement using a dissection from a cow’s heart. 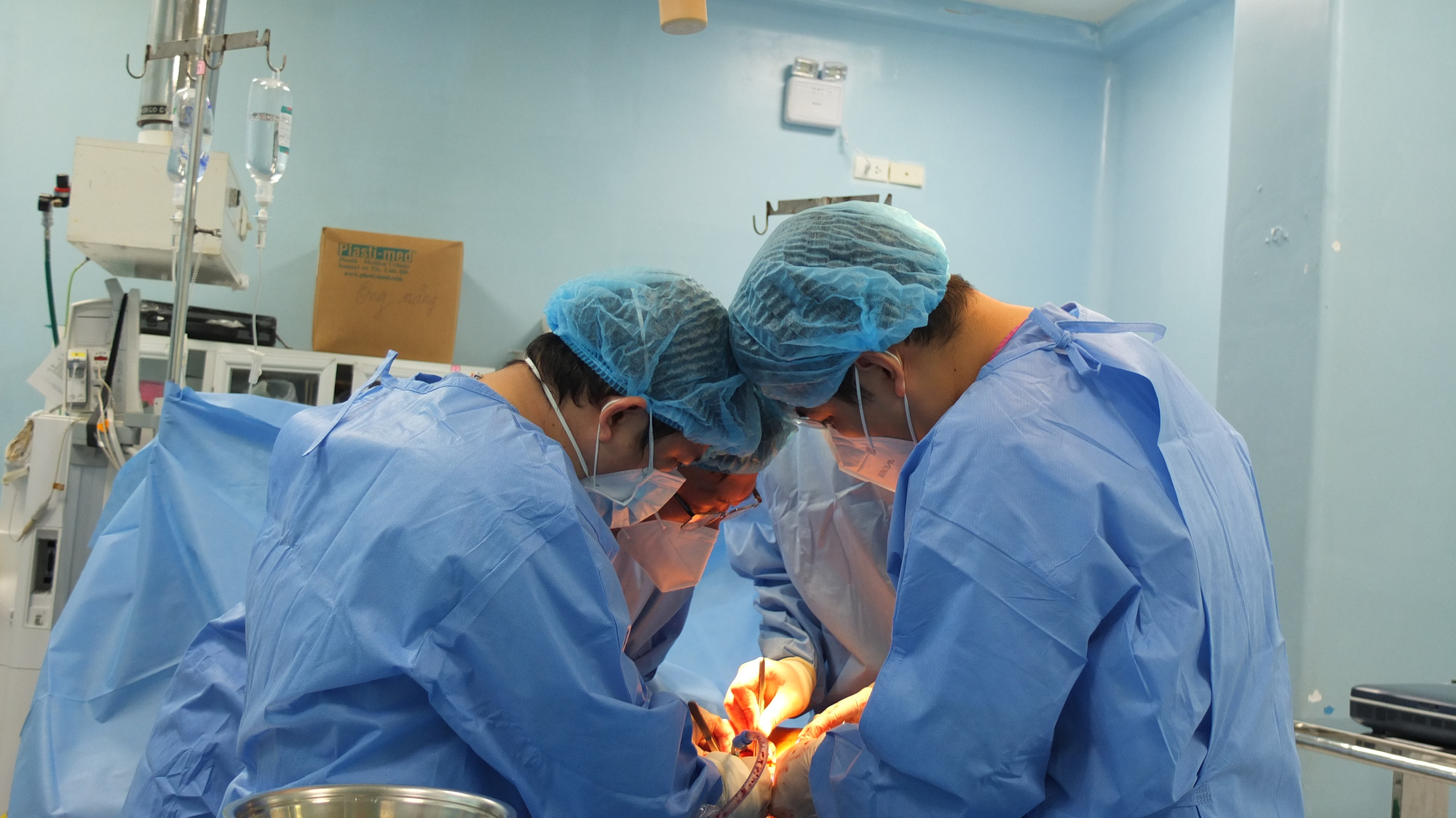 Surgery to replace the abdominal aorta from a cow’s heart

The first case saved by this new technique was Mr. D.Đ.T (55 years old, from Binh Thanh), who was brought to the emergency room by his family with severe left back pain, fever, chills, taking medicine to reduce pain. 3 days pain does not decrease. In addition, the patient had a history of many complex medical conditions, including accidental abdominal aorta rupture at a young age, hepatitis, cirrhosis, and diabetes, so all medical indications should be carefully considered. the more.

The patient underwent CT scan with contrast pump. The imaging results showed that the abdominal aorta was perforated with a hole about 2cm in diameter, forming a large size pseudoaneurysm around the aorta, 6.5cm in diameter and 8.8cm in length. Doctors diagnosed this as a case of retroperitoneal infection, the infection ate through the abdominal aorta below the kidney to form a false aneurysm, the risk of rupture causing the patient to die at any time. The patient needed urgent surgical replacement of the aorta that was perforated due to infection.

The team of Cardiovascular and Vascular Surgeons of Binh Dan Hospital had an urgent consultation to find a treatment for the patient who was in a critical condition, the aneurysm threatened to burst, and there were many abscesses in the abdomen. The use of an artificial graft is not feasible because the lesion is located in an infectious environment, the risk of infection developing and the possibility of graft rejection is high. After consultation, the doctors agreed to choose a processed bovine pericardial graft to replace the damaged artery.

Treated bovine pericardium is used to create biological heart valves, cover the pericardium in valve replacement surgery, and patch the femoral and carotid arteries (the arteries in the neck) but has never been used to replacement of the abdominal aorta. Because it is a biological graft, the treated bovine pericardium, which is highly resistant to infection, is the only suitable option to save the patient’s life in this case. This is also a challenge for the group of surgeons who are pioneers in applying this graft to replace the perforated abdominal aorta.

The successful surgery brought the patient back from the death door after 4 hours of arduous execution. The doctors opened the abdomen, removed a large abscess and a lot of necrotic fluid, cleaned the abdominal cavity, and removed the perforated abdominal aorta. Two grafts measuring 6cmx4cm were curled, sutured to form a tubular shape and replaced the already infected artery. After surgery, the patient received intravenous antibiotics for 10 days and was discharged for home care. After 1 month, the patient was re-examined with ultrasound examination results showing that the biological graft was working well, there were no signs of infection or rejection. The patient no longer has fever and abdominal pain, and is very happy to say that he has truly “returned from the dead”: 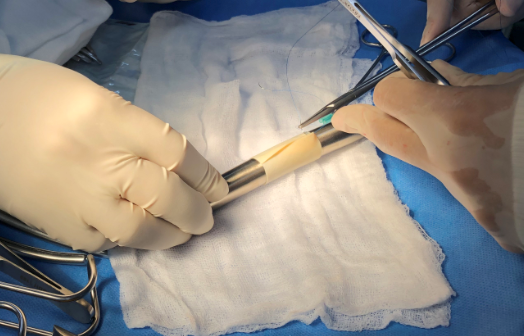 “My life has always had to fight with all kinds of diseases. This trip did not pass. Fortunately thanks to timely surgery. My family is indebted to the doctors who did not mind difficult diseases to operate on me.”

BSCK2 Ho Khanh Duc, Head of Cardiology and Vascular Department of Binh Dan Hospital, said that infectious aortic pseudoaneurysm is a rare disease and is a big challenge for surgeons in the treatment and selection of grafts. suitable replacement to avoid infection. Especially in the case of many underlying diseases such as patient T., it is even more difficult.

“Very glad that the patient had the infected abdominal aorta replaced with a biological graft made from bovine pericardium at Binh Dan Hospital with good recovery results, no infection, no pain. will pave the way for the use of alternative materials in the future for cases of aortic perforated aneurysms due to infection,” emphasized Dr.

No longer dependent on foreign countries 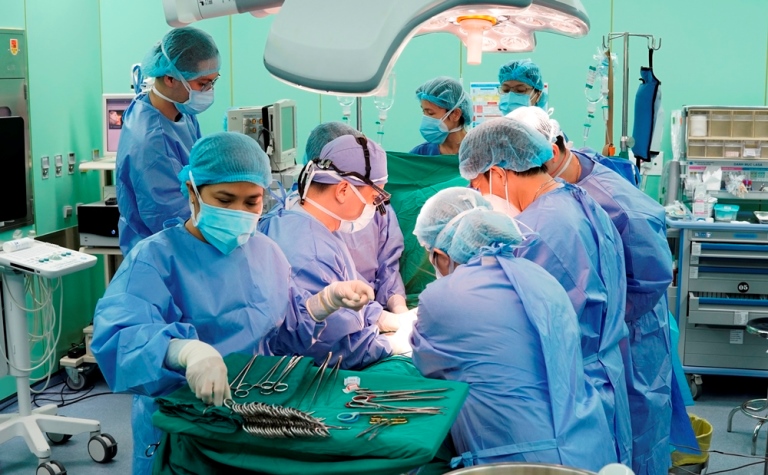 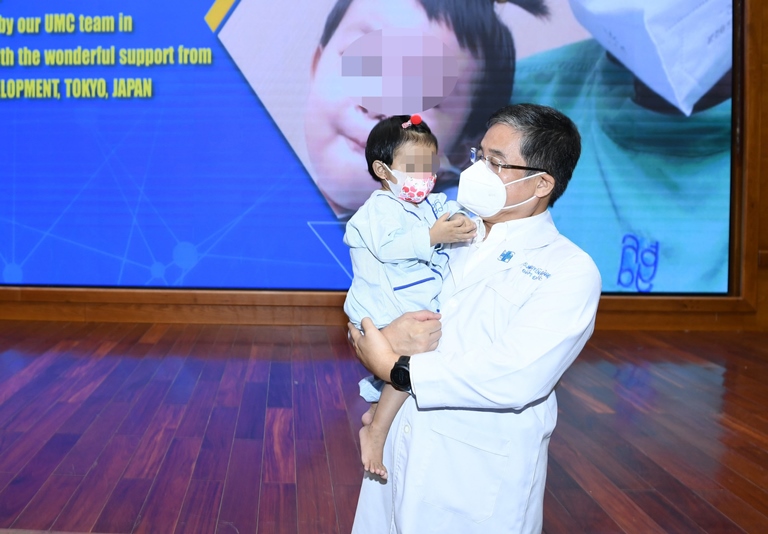 Associate Professor Dr. Nguyen Hoang Bac, Director of Ho Chi Minh City University of Medicine and Pharmacy Hospital, congratulated the patient on the day he was discharged from the hospital.