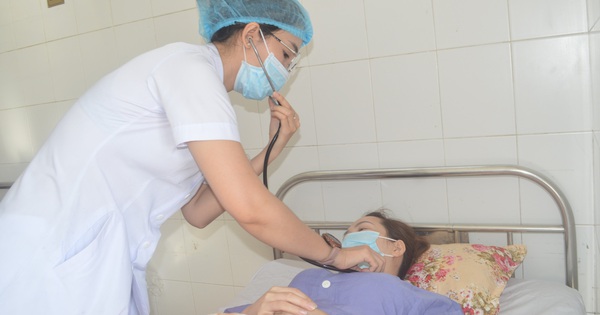 On the afternoon of June 23, BS.CKII Pham Thanh Phong – Deputy Director of Can Tho Central General Hospital – said that a woman with an ectopic pregnancy was rarely admitted to the hospital in a state of shock and severe blood loss due to bleeding from the uterus. Internal bleeding has been successfully operated by obstetricians.

The patient is a LTBB (31 years old; living in Can Tho City) who was transferred to Can Tho Central General Hospital by the frontline hospital with a diagnosis of abdominal pain, septic shock, peritonitis, 24 weeks gestation, threatened miscarriage, Life is at stake…

The hospital urgently consults many specialties and comes to an agreement on emergency surgery for pregnant women. When opening the abdomen, the doctors noticed about 3000ml of fresh blood and clots flooded the peritoneal cavity. To the right of the uterus is a broken hornet, containing the placenta inside. The fetus was pushed into the peritoneal cavity.

The team removed the horn of the mouse, the right uterine tube, and cleaned the abdomen. After surgery, the patient’s condition was better, and his survival was stable.

According to Ths.Bs Nguyen Huu Thoi, Deputy Head of the Department in charge of the Department of Obstetrics and Gynecology, this is a case of 24 weeks pregnancy in a broken horn of the uterus – a type of ectopic pregnancy. Unicornuate uterus is a rare congenital anomaly, accounting for only 4-5% of uterine malformations. Frequency is about 1/76,000 pregnancies.