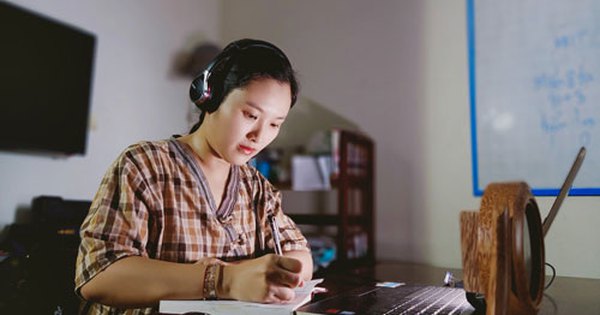 Ms. Van Anh, an alumnus of the Department of Psychology, University of Social Sciences and Humanities (Social Sciences-NV) – Vietnam National University, Ho Chi Minh City, a psychological consultant of the “Spiritual Vaccine” program to support people through total Radio 1022, said: Many people call the switchboard asking a lot of questions, yelling and shouting, but actually they just want to hear, want to know clear information without anyone sharing or listening, so they pressing.

Find the call center to talk

Participating in the “Spiritual Vaccine” program from the early days, Ms. Van Anh took on the task of operating the switchboard, providing emergency support and listening to clients share their problems. Ms. Van Anh said that there is a shift she has to receive from 20-30 phone calls, each case of psychological counseling will last from 45-60 minutes.

A working shift of a psychologist of the “Spiritual Vaccine” program to support people via call center 1022 (Photo provided by the University of Social Sciences and Humanities – Vietnam National University, Ho Chi Minh City)

She said, there was a case where a middle-aged man called the switchboard immediately lamented, cried and said that his son had died of lung disease, due to the epidemic, the family had to borrow money to take care of his son, he needed 17 million VND support package.

After receiving Van Anh’s sharing, the man opened his heart more, confiding that the day he called the switchboard was also 49 days for his son, because of grief, he went to the switchboard to talk. . At the end of the call, the man thanked Ms. Van Anh for her encouragement, listening, and advice, helping him to calm down and see no need for a support package.

Like Ms. Van Anh, Ms. Nguyen Vu Thanh Truc, a former student of the Psychology Department of the School of Social Sciences and Humanities, realized that she needed to be responsible for society, so she signed up to participate in the “Spiritual Vaccine” program as soon as possible. The program has an open letter.

While on duty, Ms. Truc’s phone kept ringing, and as soon as she finished this call, another call came in. One day, Ms. Truc received more than 50 calls. “I didn’t have the heart to do anything else, because if I missed people’s calls, I would be very sorry and feel sorry for the people, because the people really needed it, so I called, so I tried to help as much as possible. The more the better,” said Truc.

According to Ms. Van Anh, the peculiarity of online counseling is that psychological counselors will help clients calm down and suggest solutions for them to find resources for themselves. If after talking they still have anxiety and insecurity, the counselor will transfer the client to intensive psychological intervention.

There was a case of a female student with Covid-19, after returning from isolation, she often dreamed, felt her health was worse, couldn’t go up and down the stairs, just hung around in the room to dial the phone. Although she knew that she needed to improve her situation, the female student did not have a solution, so she suffered from frequent insomnia and was also mentally unstable. When calling the switchboard and sharing her problem, the female student was suggested solutions by Ms. Van Anh and relieved her psychological pressure and found motivation to improve her mental and physical health.

Ms. Van Anh believes that psychological instability depends on many factors, but all stem from daily worries, such as: having no source of income, having no one to share, due to having to stay at home often. … leads to stress, even wanting to commit suicide.

“When calling the switchboard, people have an uncomfortable feeling in their body, so the counselor must listen unconditionally, listen to the client’s story and thereby talk to advise and reassure. spirit and together with the client give solutions for them to choose,” – Ms. Van Anh said.