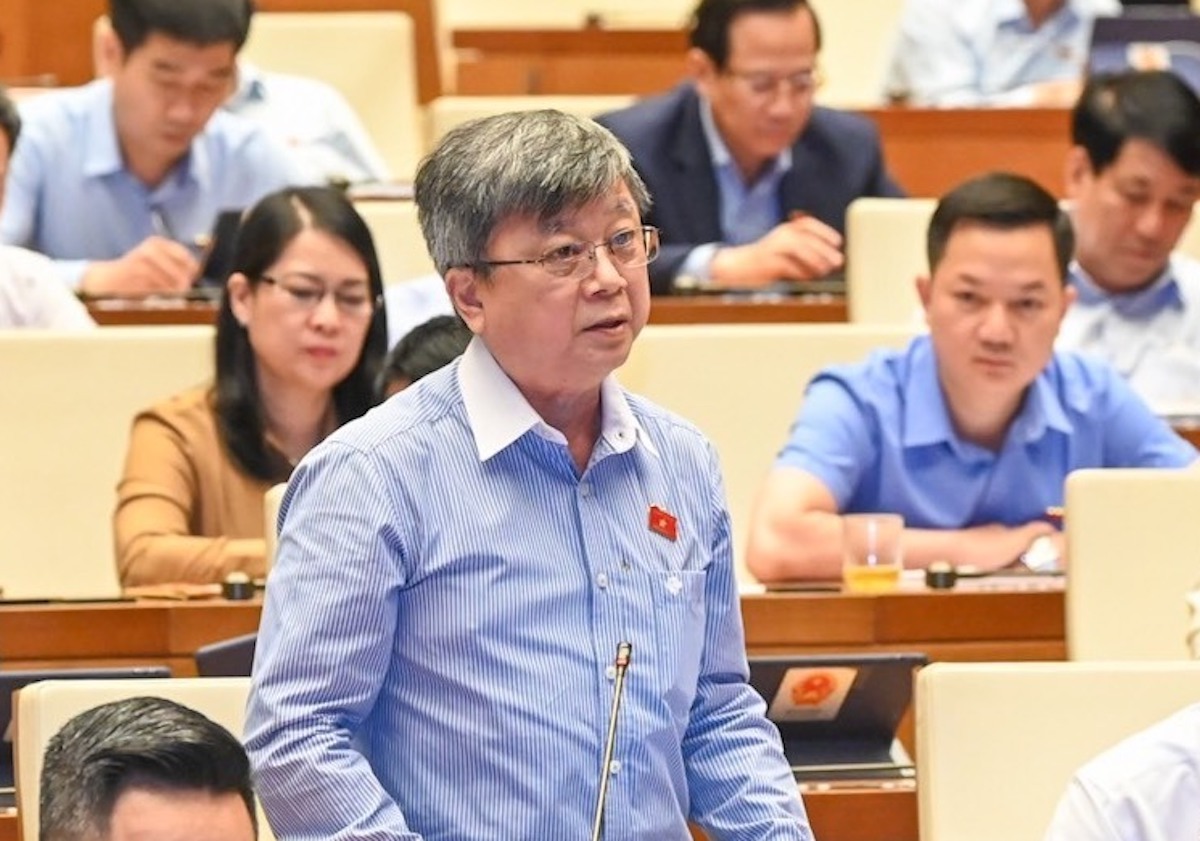 Delegate Truong Trong Nghia said “should not regret” nuclear power and proposed to delete the plan to build a factory in Ninh Thuan.

The Ninh Thuan nuclear power project was stopped in 2016. In a recent report, the National Assembly’s Economic Committee suggested that nuclear power research be considered at the next stage of energy development to reduce emissions. net zero by 2050 according to the Prime Minister’s commitment at COP 26. This agency also suggested the Government consider temporarily suspending the planning for the planned locations of Ninh Thuan 1 and 2 nuclear power plants until the end of the year. when an official decision is made.

According to him, the Party, State and the 14th National Assembly have carefully considered the policy of suspending the construction of Ninh Thuan nuclear power plant in 2016.

“The Economic Committee in the monitoring report has nostalgia, so it proposes to keep this plan, and I propose to delete it. In the next 10-20 years, whether nuclear power will be built or not, then it will be built. make a new plan, calculate where to work”, Mr. Nghia stated.

After more than 10 years, Japan still has not solved the Fukushima nuclear power problem, although this is an advanced country and has long developed nuclear power. With the capacity of autonomy, risk management of nuclear power in Vietnam is “at a very low level”, Mr. Nghia said, “we should not regret it anymore”.

Ms. Dang Thi My Huong, deputy head of the delegation from Ninh Thuan province, also said that if the planning was extended with the planned locations for nuclear power plants, it could make the lives of people in the project area more difficult.

“People in the project area are worried, strategic investors in the province will be very worried if this planning is extended,” Huong said and asked the central government to soon give official comments on the investment policy of the power project. Nuclear Ninh Thuan.

On the other hand, this site has been carefully studied by Russian, Japanese partners and related ministries and confirmed that Ninh Thuan is the most suitable place to develop nuclear power.

The Minister of Industry and Trade informed that the world must now return to developing this type of energy. He took the example of the United States and Germany, two countries that reduced nuclear power three years ago, but recently had to develop a roadmap to develop this energy more strongly in the face of geopolitical fluctuations, as a source of energy. electricity base for renewable energy development.

He further analyzed that in order to achieve the goal of reducing net emissions to zero by 2050 as committed by the Prime Minister at COP 26, it is necessary to strongly exploit clean energy sources, such as solar power and wind power. While to exploit this energy source, it is necessary to have a stable background power source. In addition to coal power, hydroelectricity, nuclear power is evaluated as a suitable, cheap and clean base power source.

“Coal power has no longer developed conditions, hydroelectricity has also run out of space, so in the future, to achieve the goal committed at COP 26, it is necessary to develop renewable energy very strongly,” said Mr. Dien.

“Now, we should not consider further, but wait until the competent authority decides whether to continue or not. But the location of the nuclear power plant has been studied very carefully by the partners and they confirmed that there is no place. Which is more suitable than Ninh Thuan”, said Mr. Dien.

Previously, on the morning of May 27, in the corridor of the National Assembly, some delegates said that in the immediate future, developed energy sources should be prioritized, but in the future, nuclear power should be considered.

Share with VnExpress In the corridor on the morning of May 27, Prime Minister Pham Minh Chinh acknowledged that nuclear power development is a matter that must be studied carefully and he said he would wait for the next policy of the Politburo and the Central Committee.

While waiting for the competent authorities to decide on the issue of nuclear power, the National Assembly deputies suggested that the current urgency is to completely deal with the shortcomings. after the policy of stopping the Ninh Thuan nuclear power project from 2016, ensuring the rights of people in the project area.

In fact, Ms. Dang Thi My Huong reflected that the Government after nearly 5 years had not approved the production stabilization project when there was a policy to stop the Ninh Thuan nuclear power project was launched, making the lives of people in the region worse. the project is very difficult to exercise rights and activities related to land. This wastes land resources in the area.

People have limited land use rights, are not allowed to buy, sell, transfer or mortgage land to borrow capital for production; It is forbidden to build or renovate housing, infrastructure, and welfare works that are not invested and are currently severely damaged…

Mr. Truong Trong Nghia also urged the authorities at all levels to focus on ultimately solving the rights of people in the project area; benefits of trained cadres and engineers… Along with that, he said that there should be a new plan for Ninh Thuan to develop into a center for development of renewable energy and new energy, in order to create movement in the economy. local economy.