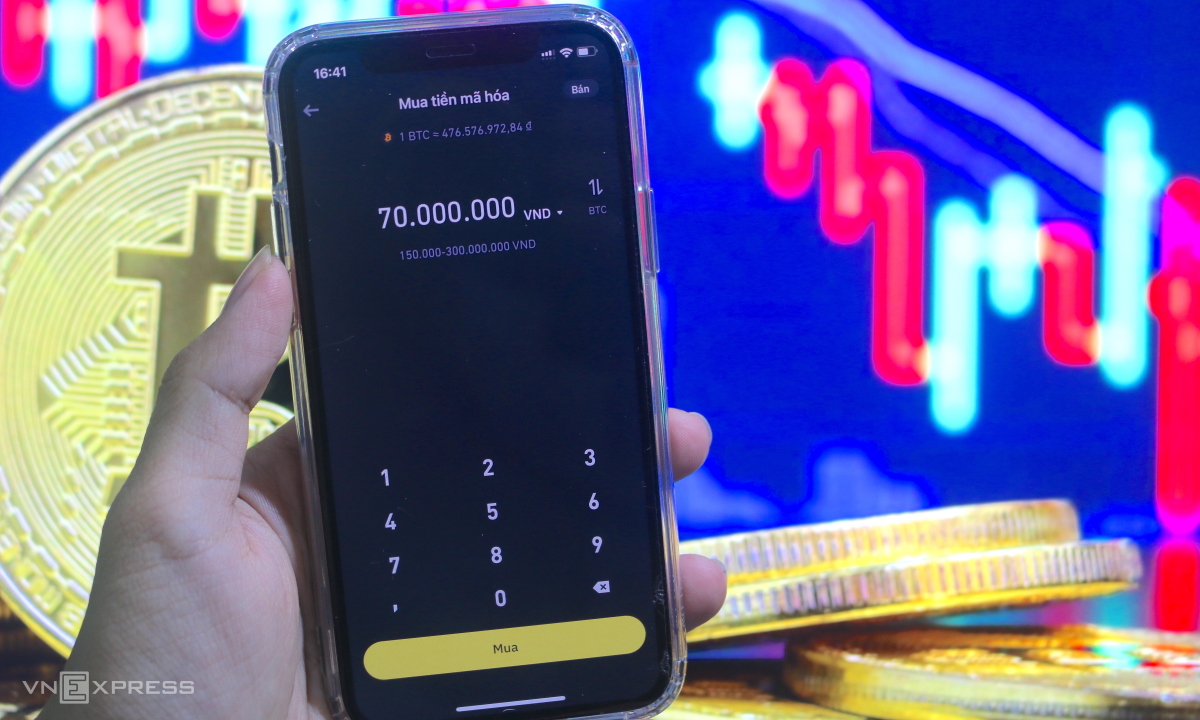 Investors think that the price of $ 20,000 per Bitcoin is an attractive buying point, so they are ready to “fish the bottom”, believing that the market will recover soon.

Buying Bitcoin since the market price was about 38,000 USD per dong, Thanh Binh (HCMC) started turning off transaction application notifications from the end of April until now. Losing more than 40 million dong, this investor still holds it with the belief that the price will recover, even if it takes a long time. Some people advised Binh to consider buying more Bitcoin as the price continues to fall, then wait for short rallies, sell again. Just like that, he could soon make up for the loss from the amount of cryptocurrency he bought earlier.

Last weekend, receiving news that Bitcoin broke $20,000, Thanh Binh decided to buy more than 0.1 units at less than $19,800 per coin. “I believe this is already the bottom of the cryptocurrency, the market will recover gradually at the end of the year so it is reasonable to buy more now,” he explained.

Also last weekend, Hai Ly (Dong Nai) spent nearly 70 million VND to buy more Bitcoin and Ethereum. Ly thinks that the above price is reasonable and appeared at the time when she had the need to continue diversifying her investment portfolio.

Analyzing historical data and consulting with many market observers, Hai Ly believes that the world’s largest cryptocurrency operates on a 4-year cycle, from November 2011. At the end of each cycle, the market price drops sharply, then gradually enters a prolonged support zone, and then bursts into a new price level. There is a very high bounce cycle for cryptocurrencies, like last November.

“According to the above rule, the current cycle started from January 2019 and the current May-July 2022 period ends, plus other market factors causing the Bitcoin price to drop is natural.” , she analyzes and thinks that the market price of this currency will soon recover according to the rule of starting a new cycle in the middle of 2023.

The above two investors are just an example of the opposite trend of capital flows when the cryptocurrency market falls deeply.

Follow Bloomberg, on Twitter – where most of the discussion about cryptocurrencies takes place, is starting to get a lot of talk about buying opportunities when the market is down. Many investors share on the social network that they remain confident in the cryptocurrency even amid the recent sell-off that has wiped billions of dollars off the market value. Google Trends data also shows that weekly searches for Bitcoin have hit a year-high in recent times.

The market’s buying momentum was further boosted when it was reported that the world’s largest cryptocurrency exchange Binance quietly bottomed a large amount of Bitcoin. Blockchain retrieval data shows that the cold wallet address of this exchange has more than 100,000 units, worth more than $ 2 billion at the market price at the time, accounting for 0.5% of the Bitcoin that has been mined. After that, CEO Changpeng Zhao denied that Binance bottom-fishing and cold wallet balance increased because users sent more Bitcoin to the exchange.

The trend of rushing to buy Bitcoin when the cryptocurrency market plummeted has existed before. In the week before the world’s largest cryptocurrency hit the $20,000 mark, coin funds recorded a second consecutive week of higher inflows than other digital asset funds. A report from CoinShares shows that Bitcoin-focused funds raised $125.9 million in the week ending June 3, and up $506 million year-to-date.

Bitcoin short-term funds — which primarily want to speculate on the cryptocurrency’s price drop — also saw inflows of $1.3 million. Yahoo Finance The rate of Bitcoin buying is at its highest level in nearly a year.

However, participating in the game of “buying at the bottom and selling at the top” has many potential risks. Share with VnExpressMr. Le Sy Nguyen – Southeast Asia manager of Bybit, doesn’t think this is an attractive buying point. The market has just started into a cycle of strong volatility after the collapse of Luna – Terra and the US Federal Reserve (Fed) raised interest rates. This caused heavy damage and greatly affected the psychology of investors, leading to the market falling into a state of “extreme panic”.

“Anything can happen during this period and bottom fishing will be risky for investors who expect short-term profits,” Nguyen said.

Data from one of the world’s largest cryptocurrency exchanges shows that the prices of popular cryptocurrencies are now more affordable than old peaks. But according to Bybit Southeast Asia Manager, investors should determine the need to participate in the long term and in the short term, there is a high possibility of high risk. If you are a risk averse investor, continue to monitor and find entry points when the market is more stable.

“The market has been entering the ‘winter’, but the peak or not, no one can say for sure,” Nguyen said, predicting a high probability that the “winter” of cryptocurrencies will continue to last. to the end of the year.

Bloomberg According to Mati Greenspan, founder and CEO of market analysis platform Quantum Economics, the lively discussions on Twitter demonstrate the FOMO effect of investing in volatile markets. He cites the Bitcoin shake-up on June 21 as an example of this. If investors failed to buy any units during the previous drop below $18,000, they would lose money yesterday when the Bitcoin market continued to evaporate below $20,000 a coin.

The owner of a digital asset startup in Vietnam, who asked to remain anonymous, said he could not give advice on whether to buy or not at a “sensitive time like today”. But this person believes that the eternal rule is always to invest for the long term and understand where you are investing your capital. The same principle applies to all risky assets. As for digital currency, this asset still has the opportunity to grow as more and more people accept it, meaning that instead of just being an investment, digital currency is increasingly expanding its usefulness.

A survey conducted late last year by Deloitte indicated that 75% of US merchants plan to accept cryptocurrencies or stablecoins within the next two years.

“It is not possible to evaluate digital assets like the method used to consider stocks, because they do not generate income like businesses. Fundamental indicators that represent the potential of digital assets must be is the number of wallets, transactions and user size,” this person emphasized.