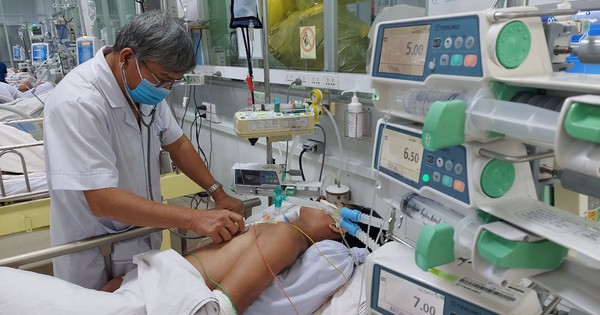 Recently, the Ministry of Health sent a telegram to provinces and cities across the country on strengthening the prevention of dengue fever (DHF). The ministry predicts that the number of dengue cases in the coming time will continue to increase and may explode on a large scale if it does not take drastic measures to prevent it.

The number of infections is increasing rapidly

On June 24, Ho Chi Minh City Department of Health said that according to quick reports from 4 hospitals at the last level for dengue treatment, cases are increasing, of which there are 626 inpatients with 82 severe cases, 50% of cases. Severe cases were transferred to provincial hospitals due to overcapacity for treatment.

According to Mr. Tran Quang Hien, Director of the Department of Health of An Giang province, the number of dengue cases in the province is at a high level with 5,975 cases, an increase of more than 400% over the same period. It is predicted that dengue treatment hospitals in An Giang may be overloaded in the next 2-4 weeks. “The health sector is trying to take many measures to prevent a strong outbreak. The good sign is that now the number of dengue cases is leveling off and decreasing. However, we determined that dengue is still a concern, so It is necessary to take drastic measures to prevent it,” Hien affirmed.

Binh Duong is also a province with a high number of dengue cases recently. Dr. Huynh Minh Chin, Deputy Director of Binh Duong Provincial Department of Health, said that in the first 6 months of 2022, Binh Duong province recorded 4,867 dengue cases and 8 deaths. Di An city, Thuan An city, Tan Uyen town and Ben Cat town are the localities with high number of cases. “These are the areas with a large concentration of workers – workers, there are many hostels, the sewage system is entangled, in addition, the people’s low awareness of environmental protection is also the cause of the rapid increase in dengue.” – Mr. Chin said.

According to Mr. Chin, although the number of dengue cases has increased, anti-shock drugs and fluids as well as high-molecular-weight fluids have basically responded to dengue fever. The biggest difficulty of the health sector in Binh Duong at the moment is the lack of grassroots medical staff when implementing dengue prevention activities because many people quit their jobs.

Lang Lang remains, it is difficult to prevent dengue fever

The Department of Health of Ho Chi Minh City has just checked and monitored in Ward 7, District 8 – the area with the most dengue cases in the district – showing that water containers with larvae are still present in people’s homes and schools. . Notably, in some places, despite being reminded many times, the situation has not improved.

At a meeting with the People’s Committee of District 8, Dr. Le Hong Nga, Deputy Director of the Center for Disease Control of Ho Chi Minh City, said that the risk of dengue in District 8 as well as in other districts in the city is mainly from water containers in the city. Therefore, in order to prevent dengue, the most important thing is to find and handle containers and areas of stagnant water, so as not to let mosquitoes lay eggs to create larvae.

According to the report, in District 8 there are 1,147 points at risk of becoming an outbreak of dengue fever, up to 1,014 points are homes that store a lot of water for daily life. Before this fact, Dr. Nguyen Huu Hung, Deputy Director of the Department of Health of Ho Chi Minh City, was concerned: “Heard reports that the locality has done many ways to prevent the epidemic, but after checking, it was not as reported. epidemic prevention and control activities must be put into practice, with inspection and supervision, without formality in documents and papers. Otherwise, it will be very expensive.”

Dr. Hung said that after communicating, you have to see how many people change their behavior, not just play loudspeakers and hang banners without knowing how many people listen. Dr. Hung also wondered that the locality had proposed to sanction the cases of recidivism, not cleaning up, leaving litter, but so far, no place has been handled. “For places that do not comply well, they must blame the leaders or apply decrees, specifically Decree 117 to sanction administrative violations in the health sector” – Dr. emphasize.

The hospital is over loaded

According to health experts, being negligent and subjective in the prevention of dengue will lead to overloading the health system when the number of cases increases.

Recorded at the Hospital for Tropical Diseases in Ho Chi Minh City, in the first 6 months of the year, the number of dengue cases hospitalized increased sharply with 1,661 cases, of which 1,310 adults and 351 children. In terms of severe cases, there are 200 people, including 46 children and 154 adults.

Specialist Doctor II Nguyen Thanh Phong, Head of Infection D Department of Ho Chi Minh City Hospital for Tropical Diseases, said that the hospital has 550 beds but currently treats more than 600 patients, including more than 300 dengue patients. Corridors in some departments have begun to be used to arrange beds for patients.

“At this time, fever should immediately think of dengue fever. Pregnant women, obese children, people with underlying medical conditions… should be hospitalized early when dengue is suspected, because these are the subjects at high risk. severe transfer,” emphasized Dr. Phong.

Dr. Dr. Nguyen Van Hao, Head of the Intensive Care Unit against Poisons, Ho Chi Minh City Hospital for Tropical Diseases, said that every day the hospital receives 1-2 cases of severe dengue, and most of them previously bought their own medicines to take at home. only when they get worse, they go to the hospital and there are cases where they don’t survive. A typical case is a woman who contracted dengue at 20 weeks of pregnancy, was hospitalized late in a state of both dengue shock and liver and kidney failure.

Explaining the cause of the increase in the number of severe dengue cases in recent years, Dr. Hao said that severe or non-serious disease is difficult to predict because the disease is related to the immune mechanism. There are four types of dengue that cause disease, in which the first infection (primary infection) is usually less severe. However, in case of re-infection 2-3 times, the disease will be more severe.