Overcoming Accent, Vios firmly holds the throne of B-class sedan in May 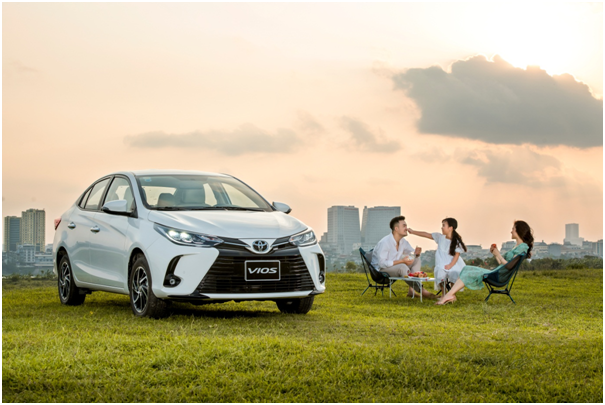 Toyota Vietnam has just launched a preferential program to support 20 – 30 million VND, equivalent to 50% of the registration fee for customers buying Vios cars in June 2021. As for customers who buy on installments, Toyota Finance also offers a loan package of up to 80% of the car value with an interest rate of only 2.99% in the first 6 months, and after that, it is also lower than commercial banks. pretty much commercial.

This means that you only need to have about 95 million VND to realize the dream of owning a Vios, the rest Toyota will lend you and the monthly payment is only about 4 million VND. Toyota’s procedure is also said to be the fastest, simplest and does not cost any other costs. This is considered a “bargain” for anyone who is intending to buy a Vios car.

Back to the story of the Vios car, which is considered a “national” car for everyone, every family owns a car for the first time or upgrades from a class A compact car with a financial budget of about 600 million. Perhaps, no one is preparing to buy a car without knowing the name Vios, because it has imprinted in the minds of Vietnamese consumers about a popular, close-knit and ubiquitous model.

Launched in 2003, after nearly 20 years with more than 180,000 cars sold, Vios has created a “monument” in terms of sales and position that no other model can achieve.

Vios always stands at number 1 on the list of best-selling car models every year. And in June 2021, with 1,789 Vios cars to consumers, Vios firmly holds the throne in the B-segment sedan segment.

Vios is successful thanks to the core values ​​that make up the Toyota brand. There have been many Vios competitors launched on the market, but the values ​​​​that this model from this Japanese brand brings are still very useful and close to users every day.

The durability of Vios makes you not have to think about your car, withstands in all environments with high intensity, the early Vios cars are still working hard to bring the owner convenience every day. . In particular, Vios brings great economic benefits, which is reflected in both operation, repair, maintenance and resale value.

In operation, Vios is the most fuel-efficient in its segment, which helps you save money every day, per mile traveled. And if you use Vios as a service or technology vehicle, the benefit from fuel savings is even more meaningful. Because of its durability, Vios requires less maintenance than competitors, so it will also save costs for owners.

According to statistics, the total amount to maintain a Vios car from 0 to 100,000km (equivalent to about 10 years for normal users) is about 24 million VND, this figure in competitors is more than 40 million. copper.

About repair is also a huge advantage of Vios. This is a “national” car, so you can fix it at any genuine dealer with a system of 75 dealers across the country, spare parts are always available without having to wait, saving time and effort. .

In particular, Vios 2021 has been improved and added more safety features. The car is supplemented with an emergency brake light system from the E CVT version and above, the automatic door lock feature according to the speed for Vios G.

In addition, Vios still inherits other safety features from previous versions such as reversing camera, reversing sensor, 3-point seat belt in all positions, … Vios is a rare car that has achieved 5-star certification. Asean Ncap in the segment (other cars only get 4 stars), 7 airbags (competitors only 4 or 6 bags), besides the systems: ABS, BA, EBD, support for horizontal departure HAC, VSC anti-slip, TRC traction control (competitors do not), reverse camera, sensor around the car, child seat hook

Also in June 2021, the new Wigo version has an entertainment system with a new touch screen that connects to smartphones, bringing convenience to users. In addition, car buyers will receive a preferential package worth VND 20 million, including PVC leather seat covers, genuine glass film and an extended warranty package. The program is valid from June 7 to December 31, 2021.

Particularly for customers who buy Rush until December 31, 2021, they will continue to receive 1 year of material insurance worth 8.7 million VND when completing the payment procedures and many attractive incentives from the financial loan package.

At the same time, in order to ensure the safety of customers and employees during the Covid-19 epidemic season, the Toyota dealer network nationwide also implements programs to promote online activities, deliver cars to customers. demand goods and flexible, urgent repair services…