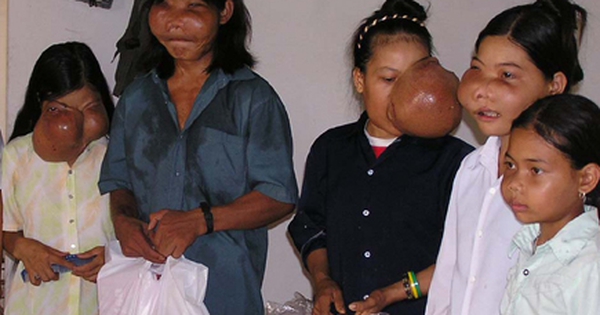 The 5 children of Mr. Luc Van Quan were chased away by the village

Since then, Newspaper Workers and readers have accompanied and supported to welcome the children of Mr. Luc Van Quan back to Hanoi for medical examination and treatment.

After that, the jawbone and cheekbones gradually protrude over time, causing the face to become distorted and deformed by the larger and larger lumps of meat that cling to the face. 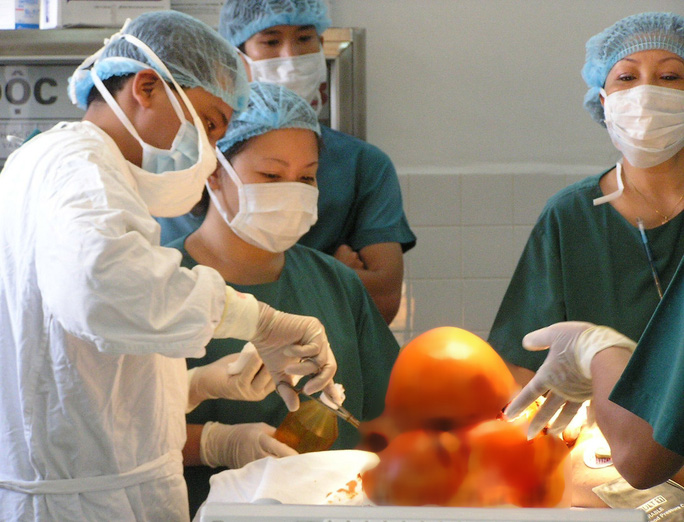 Among the children with the disease, the faces of Luc Thi Moi and Luc Thi Hai were the most severely deformed. The tumor covers one side of the face, nose, and mouth. Both of them couldn’t breathe through their noses because their noses were completely covered. His children had to live in a hut in the forest only because the villagers were afraid that his “demon-possessed” children would spread disease to the whole village.

Mr. Quan has brought his son to Hanoi many times to look for hope, but no hospital dares to treat him. Doctors said that his son had a benign bone tumor and no one dared to operate. Finally, Doctor Nguyen Quoc Bao, Head of Head and Neck Surgery Department (Central K Hospital) decided to accept surgery for all 5 sisters.

Fortunately, the first surgery of the 5 sisters performed on Luc Thi Hai was successful. After 2 rounds of surgery to remove a tumor weighing about 7 kg and a plastic surgery, Hai was discharged from the hospital. 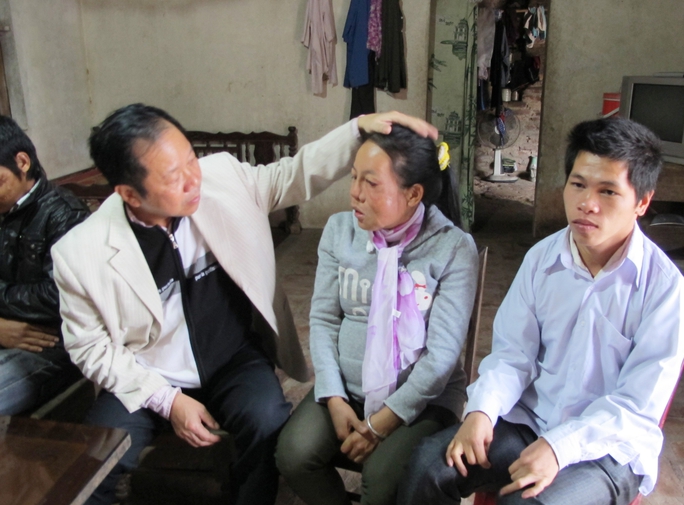 The late Doctor Bao visited the family of patient Luc Thi Hai in Thai Nguyen after 5 years with 3 surgeries to remove the patient’s tumor.

Up to now, after many years and many surgeries, all 5 of Mr. Luc Van Quan’s children have been operated on, no longer have to bear the giant tumors on the face, of which 4 are married and have given birth. . After those surgeries, the house leaning against the cliff of Mr. Quan’s family is always filled with laughter.

Newspaper Workers Here is a summary of the letter Ms. Luc Thi Hai has just sent to the newspaper team Workers On the occasion of Vietnam Revolutionary Press Day June 21:

Today is Vietnamese journalist’s day, my name is Luc Thi Hai, my husband is Ly Van Ninh and my 2 children are An and Trong.

I wish the Nguoi Lao Dong Newspaper and the Vietnamese newspaper industry a good day.

15 years ago, at a time when my family was most desperate, Nguoi Lao Dong Newspaper appeared to save my family and the doctors at K Hospital who helped my family from despair to have faith and confidence. hope. Because the tumors growing on my sisters’ faces are too big and ugly.

It has been 15 years now, and I would also like to thank all the benefactors who have supported and helped my family during the most difficult times. And on behalf of my family, I would like to thank all the leadership of K Hospital, and also the leaders and doctors and nurses at the head and neck surgery department of K Hospital, Tan Trieu campus.

Two years ago, I had Thien An examined her because her cyst was growing in the wrong place. As a result, the doctors of Thai Nguyen Central Hospital said that the disease was inherited from the mother’s genes. Hearing that I was once again completely devastated. At the time when I was at my lowest, I didn’t know what to do, I cried so much it was like being swept away by water in a whirlpool. At that moment, the reporter of Nguoi Lao Dong newspaper called me and helped me a lot…

On Monday, June 27, 2022, Doctor Ngo Xuan Quy, Head of Head and Neck Surgery Department (K Hospital) will operate on Thien An and open a ray of hope for other children…

Talking to reporters Newspapers Workers On June 21, Dr. Ngo Xuan Quy, Head of Head and Neck Surgery Department, Central K Hospital, said that after receiving patient Ly Thien An, doctors took a scan and determined the patient had Fibrous dysplasia causes giant lumps on the face. This is a genetic disease. Previously, Thien An patient’s mother, Luc Thi Hai, was also diagnosed with this disease and had many surgeries.

Up to now, a fortunate thing for the patient is that after 15 years, the tumor has not shown any sign of recurrence. With this baby, the hospital is expected to operate on the patient next week.