Mysterious hepatitis continues to be complicated around the world 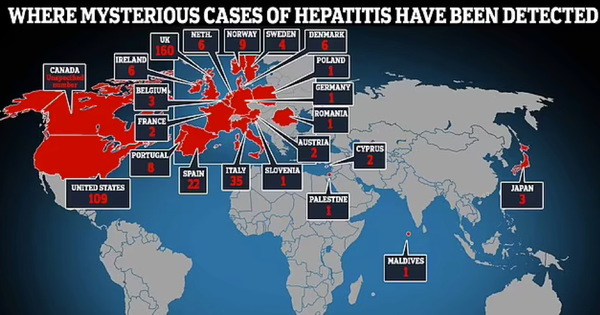 “More than 450 cases of mysterious hepatitis in children in 21 countries worldwide have been recorded. Of these, at least 12 children have died” – British newspaper Daily Mail Citing data from the European Center for Disease Control and Prevention (ECDC) said – “Two latest deaths were announced in Palestine and Ireland on May 13”.

“The real number will certainly be higher because the UK has also detected 13 other cases. Health experts also believe this is just the tip of the iceberg” – the newspaper Daily Mail identify.

Previously confirmed deaths included 5 in the US and 5 in Indonesia. Most children with mysterious hepatitis are under 10 years old. The first case was detected at the end of April, so far in the UK there have been 176 cases, while in the US it is 110.

“At least 26 children have had liver transplants. Scientists are confused because the exact cause of the disease has not been found. There is a theory that it may be caused by the adenovirus group that causes the common cold. ” – according to Daily Mail.

There have been about 450 cases of children with mysterious liver disease in 21 countries since April. Photo: Daily Mail.

Common viruses that cause hepatitis include: hepatitis A, B, C and E. However, there have not been any reported cases of a link between the virus that causes the mysterious hepatitis and other viruses. above.

Three-quarters of cases in the UK have tested positive for adenovirus. Scientists are trying to see if the mutant adenovirus will progress to become more severe. They are also studying whether the lack of socialization during the Covid-19 pandemic weakens immunity in children. Scientists also do not rule out the mysterious hepatitis that is linked to a certain old variant of Covid-19.

Although the cause of the mysterious hepatitis has not been found, scientists have ruled out the possibility of a Covid-19 vaccine, because most children infected with the disease have not been vaccinated because they are underage.

In the latest guidelines, the US Centers for Disease Control and Prevention (CDC) has asked doctors who treat hepatitis in children to take liver samples for analysis.

Parents should see a doctor if their child has symptoms of hepatitis, including gray, light stools, dark urine, or yellow eyes or skin.