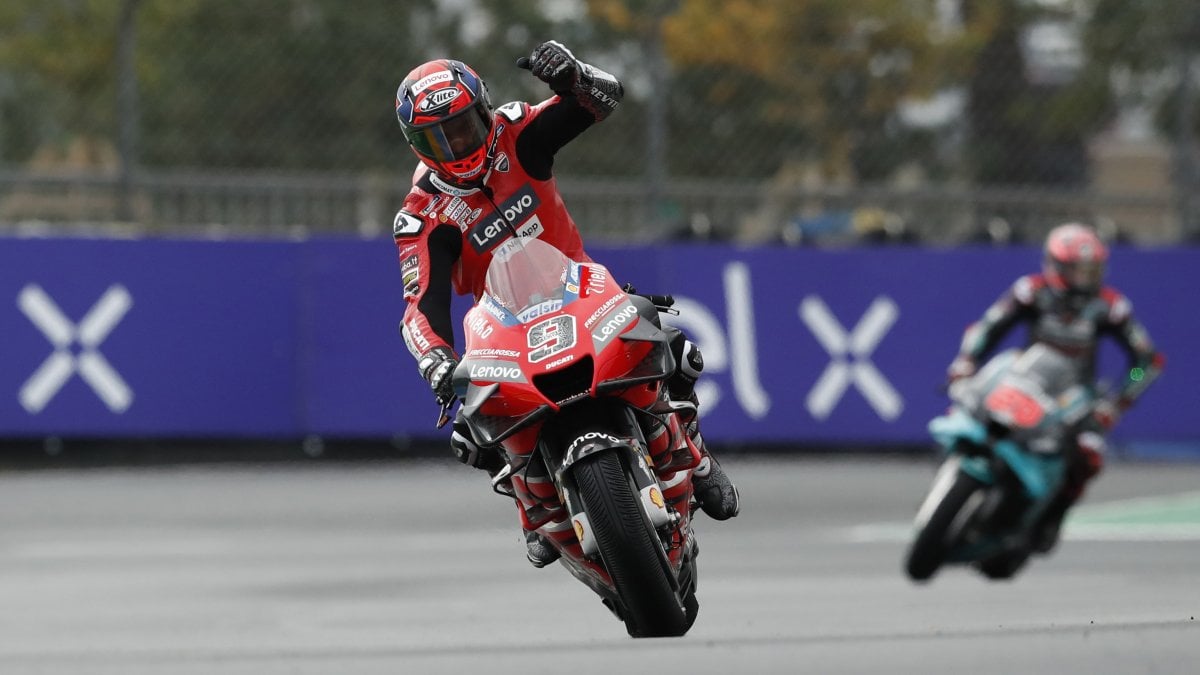 LE MANS – Danilo Petrucci, the rain wizard, wins at Le Mans by dominating a race on a wet and treacherous track from the first to the last lap: for the Umbrian official Ducati rider this is the second success of his career, after that of last year’s Mugello . “This Sunday could be the turning point for me in an unfortunate and unfair season”, he hoped on the eve. Indeed. Danilo has resisted the return of a surprising Alex Marquez, the little brother of Cannibal Marc who until now had seemed only a (recommended) supporting actor. Pol Espargaró also climbs on the podium with Ktm. Yamaha disaster: Valentino slipped at the first corner, Morbidelli after about ten laps, Quartararo finished only 9th but he maintains the leadership in the MotoGP standings with Dovizioso – in great difficulty in the final and 4th at the finish line -, who however shortens to – 19 the gap from the French and smile again.

Petrucci, happiness: “Dedicated to those who believe in me”

“Since the morning I had a wonderful feeling even in the dry. When the first drops fell I said: oh no! I was afraid of ruining everything, instead”. Petrucci, what a thrill. “With the rain I’ve always been strong, I don’t even know why. I’ve been waiting for this success for a long time, it seems like a dream: I’m really happy, here at Le Mans I’ve always been on the podium but a victory has a different flavor. to all the people who believed in me “.

Rossi, third stop in a row, farewell to the world championship

The Ducati rider – next year he will race with Ktm – finished in front of Alex Marquez, who almost doesn’t believe him: “It was a wonderful feeling, it wasn’t easy starting so far”, says Marc’s little brother, who gives back some oxygen to Honda. In 10 races since the start of the season, 8 different winners: this MotoGP is always a surprise. After Silverstone – where there is no racing this year – Le Mans is the wettest track in the world championship. Today everyone trusted the weather forecast, convinced that it would be a dry day. Bales. A few minutes before the start it started to rain, and all the floors were blown. At that point it became a question of means, with Ducati being the favorite, and of men.

Valentino, a (another) year to forget

“More than living for the day, I will have to do it lap after lap”, predicted Valentino on the eve. Poor thing. The Doc slipped at the first corner, the third consecutive “zero” in this other season to forget. “At the race for the world championship I have already said goodbye to Barcelona, ​​there will not be a last resort: but I would like to have fun”, he said. Instead. A disaster. With the rain, Petrucci and two other Ducatis blossomed immediately, those of Dovizioso and Miller who came close to him.

Danilo, the return of the warrior

Bad news for Quartararo, who dreamed of a home win to take off in the standings: the Frenchman tried to resist at first, then swallowed him up in the first laps. Pol Espargaró with Ktm and Rins with Suzuki, Crutchlow and Alex Marquez’s Hondas, even Bradley Smith’s Aprilia – which on Friday morning did the phenomenon in the wet, but after ten laps ends up in the gravel -, too Oliveira and Nakagami. All in front of Fabio, terrified by the specter of a fall. The Yamahas sank in the light rain: Morbidelli in hell, not to mention that (wet, in fact) chick from Vinales. Bagnaia tried to recover, taking advantage of the combination – track, weather – favorable to the Red.

Dovizioso and the Piccolo Marquez

After halfway through the race, everything became clearer: the factory Ducati, Miller’s Pramac and Rins’ Suzuki to compete for the race. With 9 laps to go – while Franky Morbidelli, who was struggling at the bottom, was also slipping away; and Crutchlow too ended up in the gravel – Dovizioso declared war on Petrucci and Rins took advantage of it with cynicism, shuffling the cards in front of him. Miller was betrayed by the engine and took the bribe, they raise their arm in surrender. By dint of betting on himself and good luck, the Suzuki Spaniard lost control of the GSX-RR. On the French track an unthinkable trajectory was drawn: Petrucci in the lead with a couple of seconds on the DesmoDovi, attacked by the amazing Alex Marquez, Marc’s little brother.

Bagnaia, a race to forget

In the final, the Forlì had to surrender to the return of Marquez and Pol Espargaró, and was satisfied with a 4th place which is however an injection of confidence, resisting the return of Oliveira and Zarco. Quartararo, anonymous and prudent, finished 9th but paradoxically extended one point on Vinales and two on Mir, who finished behind him. A disappointing 13th place for Bagnaia. Petrucci was celebrating a day to be framed, and in a week a revenge in Aragon.