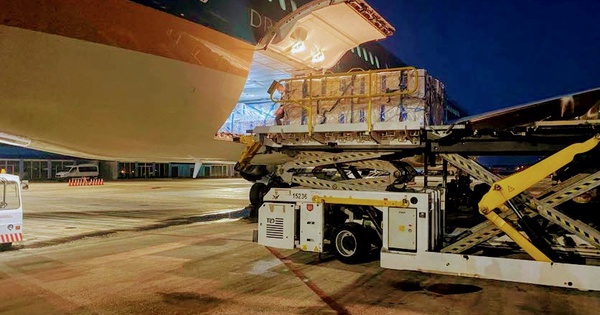 Bringing the Abdala vaccine on the President’s plane

The total number of above vaccines is 1.05 million doses, which have been loaded onto the Presidential plane to be transported to Vietnam, promptly participating in the prevention of Covid-19.

The official visit to Cuba by President Nguyen Xuan Phuc and the Vietnamese high-ranking delegation from September 18 to 20 has successfully and comprehensively completed the set goals with many contents showing the special traditional relationship. between the two countries and with the agreement to buy 10 million doses of Covid-19 vaccine Abdala from Cuba.

After finishing his visit to Cuba, President Nguyen Xuan Phuc and a high-ranking Vietnamese delegation went to New York, the US to attend the High-Level General Discussion session of the 76th United Nations General Assembly (UN) and carry out many activities. bilateral action.

During his visit to Cuba, President Nguyen Xuan Phuc visited the Center for Genetics and Biotechnology Research – CIGB of Cuba Biopharmaceutical Corporation.

Dr. Martinez Diaz, President of Cuba Biopharmaceuticals Corporation, said that in just a short time, the group has produced 27 medicinal products, of which 17 are related to the Covid-19 pandemic and have now been approved. The Cuban Drug Administration approved the use.

“The most outstanding result of the Center is the production of 5 vaccines. With these 5 vaccines, we are currently immunizing 40% of the Cuban population and are expected to vaccinate 100% by the end of November. population and the good news is that the effectiveness of the Abdala vaccine is 99.92% “- Dr. Martinez Diaz emphasized and said that this vaccine was produced in the context of Cuba spreading the Alpha and Beta variants. , and recently the Delta variant began to appear.

Dr. Martinez Diaz affirmed that through the test results, the Abdala vaccine is capable of blocking the impact of the Delta variant. After vaccination, the rate of morbidity and mortality from epidemics decreased significantly. In particular, in 4 districts where people were vaccinated, the mortality rate decreased 6 times compared to the following districts.

Cuba Biopharmaceutical Corporation has begun cooperating with Vietnam to produce and distribute this vaccine. Dr. Martinez Diaz proposed to expand cooperation with Vietnam, maybe jointly building a research project or establishing a joint venture company to produce some types of biological products.

President Nguyen Xuan Phuc witnessed representatives of Vietnam and Cuba sign a contract to buy 5 million doses of Abdala vaccine, representatives of DS-BIO Vaccines and Biologicals Joint Stock Company and the Technical Center Genetics and Biotechnology sign a memorandum of understanding to purchase 5 million doses of Soberana vaccine for children.

Deputy Minister of Health Tran Van Thuan said that the purchase of vaccines for children will be carried out quickly after this vaccine is licensed in Vietnam.

Previously, on September 20, the Government issued Resolution 109 on purchasing the Covid-19 vaccine Abdala produced by the Cuban Center for Genetic Engineering and Biotechnology.

The Government has agreed to the Prime Minister’s permission to apply the selection of contractors in special cases to the purchase of Abdala vaccine, including the receipt of a sufficient quantity of 10 million doses.

The Cuban Center for Genetic Engineering and Biotechnology does not have to make an advance guarantee or a contract performance guarantee.

In Vietnam, the Center for Research and Production of Vaccines and Medical Biologicals is the place to request approval of this vaccine.

Each vaccine dose contains 50 mcg of recombinant protein vaccine containing the receptor binding site (RBG) of the SARS-CoV-2 virus prepared in suspension for intramuscular injection. The vaccine is packaged in a box of 10 vials, each containing 10 doses, 0.5 ml each dose