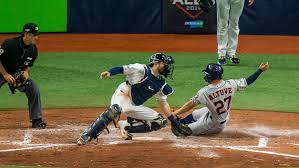 It indeed required 0.77 seconds for Kiermaier to deliver his throw (87.6 mph), during which time Altuve had covered another 20 feet, leaving him just 30 feet from third. (Twenty feet is an extraordinary arrangement! Exactly when you hear “each resulting checks,” comprehend that it’s really “every division of an ensuing counts.”) You can see him encompassing third base as Kiermaier discharges the throw.

By then, 1.6 seconds sometime later – extraordinary gauge on the 1.5, math – Adames got the absolutely on target throw. Altuve had changed third and was just 75 feet from home; Adames had hardly moved was up ’til now 195 feet from home plate.

Like Kiermaier, Adames took around 3/4 of one second to get the occupy (0.73 seconds, to be exact), and again, that turnaround time allowed Altuve to get just about 20 feet closer (18 feet, to be cautious), withdrawing us with the present circumstance: Adames 195 feet away and Altuve 57 feet away.

Adames’ on target throw to d’Arnaud took all of 1.6 seconds, genuinely better than the 1.8 we imagined, giving the catcher a limited quantity of one second to put the tag on Altuve, who really had 13 feet to go.

“I think Yordan hit the ball exorbitantly hard,” said Altuve, as reporters snickered at the comment. “No, I’m dead serious. It bounced back to Kiermaier, he’s a Gold Glove, he made a nice play, and they made a good exchange.”

Perhaps subsequently, anyway an all the more moderate rocket may have permitted Kiermaier to get it in a way he didn’t have here. In any case, the point stands: a limited quantity of a second here, a tenth of a second there. Everything matters. All that is important so much.

Getting back to our one of a kind assessments, we said five seconds for Altuve after Kiermaier started the ball rolling, and it took him 5.04 seconds. We’d said 4.8 seconds for the Rays to get the throw home if the exchanges were both marvelous – they were, again, which we can’t overemphasize – and it was truly 4.7 seconds to the catcher. The takeaway here isn’t that third-base coach Gary Pettis wasn’t directly in foreseeing what measure of time this may all need, considering the way that he wasn’t. It was that this was essentially going to work if the Rays were extraordinary, and they were.

If this all sounds unmistakable, it should. Two years earlier, in Game 2 of the 2017 AL Championship Series, the Astros overwhelmed a critical match when Carlos Correa’s walk around twofold scored Altuve, things being what they are, from first. (Notwithstanding, as we raised by then, Altuve was out by 25 feet, or he would have been if Yankees catcher Gary Sanchez had the choice to grasp the ball.)

As FanGraphs noted after Tuesday’s down, the Astros would have had equivalent opportunities to overwhelm the match if Altuve had scored (30%) or stopped at third (28 percent), considering the way that there’s simply so much “not scoring a run” can do to help you when you’re the road bunch down three, anyway having him thrown out sent those chances down to just 18 percent. Regardless, that is an outrageous road extreme regardless, and you can totally appreciate Pettis’ assessment here.

“We were battling horrendously,” Houston executive AJ Hinch successfully pointed out, “so it would have been ideal to score there when you get thrown out just barely of an inch.”

“To a great extent you need to offer credit to the following gathering,” said Altuve. “They played incredible security, especially in that play not very distant.”

“That was an especially colossal second for us, immense energy move,” Kiermaier expressed, “and it basically doesn’t beat that.” Kiermaier is right. It doesn’t beat that, and it’s a significant bit of why the Rays stay alive. Mike Petriello is an inspector for MLB.com and the host of the Ballpark Dimensions advanced chronicle.