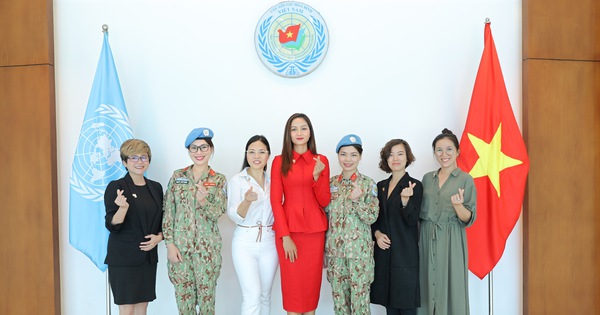 Minh Khang’s Miss Peace Vietnam contest has H’Hen Niê as an ambassador and judge and the Department of Peacekeeping as an advisor – Photo: BTC

Meanwhile, Minh Khang Vietnam Company, the organizer of the Miss Vietnam 2022 contest, is being asked by the Golden Lotus to change its name – the one that has been granted intellectual property rights by the National Office of Intellectual Property with the trademark Miss Peace Vietnam and Miss Grand International.

The relevant information was announced by Minh Khang Company to the press on the afternoon of 6-6 in Hanoi.

After this press conference, on May 9, the lawyer representing Golden Lotus Company sent a document to Minh Khang Company requesting to change the name of the contest. Miss Peace Vietnam 2022 – Miss Peace Vietnam in order to avoid causing misunderstandings for contestants, fans, and spectators, as well as not to create a duplication of names with the contest. Miss Grand Vietnam 2022 (Miss Grand Vietnam) of the Golden Lotus Company.

On June 1, the representative of Golden Lotus continued to have a document “reminding” Minh Khang to change his name.

Golden Lotus also said that Minh Khang was only licensed by the Ministry of Culture, Sports and Tourism in January 2021 Miss Peace Vietnam 2021 and Danang Department of Culture and Sports approved to organize the final round of this contest in Da Nang.

After a period of hiatus, now Minh Khang has changed the name of the contest to Miss Peace Vietnam.

Ms. Nguyen Thi Thanh Thuy also presented a certificate of copyright registration issued by the Copyright Office, certifying that she is the author of the contest script. Miss Vietnam Peace.

Minh Khang Company also has a document from the People’s Committee of Da Nang City on March 29 approving this company to change the name of the contest. Miss Peace Vietnam 2022the time to hold the semi-finals on September 3 and the final on September 11 in Da Nang City.

Mrs. Thuy also thinks that Miss Grand International which the Golden Lotus translates into Miss Peace Vietnam does not seem to make sense.

Looking for a “beautiful” beauty, no bikini contest

As the contest’s scriptwriter, Ms. Thanh Thuy affirmed that Minh Khang’s contest was definitely different from that of the Golden Lotus. This contest takes the criteria to select a “beautiful” beauty rather than a body, which must be a symbol of peace.

This contest does not have a swimsuit competition, instead there are activities to protect the marine environment, visit and pay tribute to those who have contributed to the revolution…

The contest recruits candidates with Vietnamese blood all over the world. Because there is no swimsuit competition, the contest has so far attracted many special contestants from many countries around the world. Among them is an American female pilot with a Vietnamese mother. Candidates are free of charge.