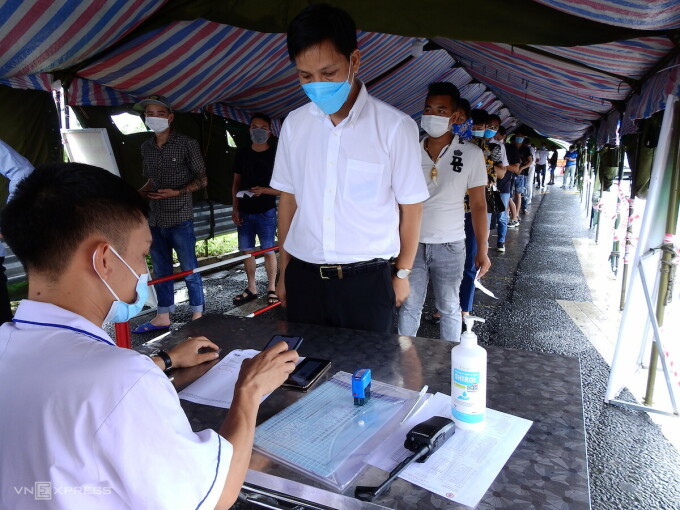 To prevent the epidemic, many localities have set different regulations and requirements on Covid-19 testing, making it difficult to transport goods.

On the morning of September 23, nearly a week after the petition to Quang Ninh complained about the difficulty of Covid-19 testing regulations with cargo drivers through Mong Cai border gate, Mr. Vietnam Logistics Service (VLA) said that there has been no positive change.

Currently, drivers from other places who want to deliver goods to Mong Cai border gate must be tested for Covid-19 three times. According to regulations of Quang Ninh, drivers must have a negative PCR test result for Covid-19 within 48 hours from the time of sampling. When arriving at the gate of Mong Cai city, the driver continues to have to do a quick test. And when leaving the border gate, the drivers have to take the final PCR test.

Mr. Tran Van Hao, Director of Thai Viet Trung Transport Company, which specializes in transporting electronic components, said that such regulations are very complicated. Mong Cai is one of the two main shipping locations of the enterprise, next to Huu Nghi border gate (Lang Son). He described, to bring goods from Lang Son to Mong Cai, businesses will have to do PCR testing in Lang Son. This place only has one sampling point, working from 8 am to 11 am and returns results at about 3 pm to 16 pm the next day.

“So, to get the ‘passport’, it sometimes takes us up to 30 hours, only 18 hours to drive back to Quang Ninh,” said Mr. Hao. This period according to him is very risky because if there is a problem on the road, the business will not be able to expire the validity of the test. Therefore, they are forced to adjust the time very carefully so as not to miss the goods.

However, the point of absurdity according to the business is that the driver must have a PCR test before leaving Mong Cai border gate. Mr. Hao said that businesses usually only take 2 hours at most for loading and unloading, delivery, but it takes up to 6-10 hours to wait for the results of “Covid-19 test”. Staying for many hours at the border gate causes businesses to increase costs, and at the same time, poses a great risk of disease transmission.

In nearly 2 months when being entangled with these regulations, Thai Viet Trung said that every 3 days, a new driver completes a trip; the additional cost incurred on each trip is 600,000 to one million dong for testing, causing 30-50 million dong loss for businesses every day; driving psychology is unstable, tired of having to “poke nose” too much.

Through discussions with the People’s Committee of Quang Ninh province, VLA was explained that the testing is to prevent the risk of China closing the border gate. Previously, on September 15-21, the country suspended the import of dragon fruits through Mong Cai border gate due to the detection of nCoV on fruit packaging. China has also recently continuously made moves to tighten imports and quarantine Vietnamese goods.

Not only facing difficulties in Quang Ninh, transport businesses said that many other localities have also tightened entry and exit through Covid-19 testing. The requirements of localities also vary, depending on the viewpoint of anti-epidemic.

Hung Yen asked for a PCR test paper, but the deadline was only 48 hours. Hai Phong sometimes stipulates that drivers must take a PCR test in another province to enter, and the license issued in Hai Phong is not valid. But there are provinces that require PCR testing to be carried out in the area.

The heterogeneity is also reflected in the isolation regulations of each locality. The business said there was a case where F1 employees were quarantined longer than F0. Specifically, these two people were on a business trip and were infected. Person F0 has a total treatment and isolation time of 30 days. The accompanying colleague, F1, after being isolated for 15 days, was allowed to return to his hometown. Here, he continued to be detained for 15 days in concentrated isolation, at home for 15 days, for a total of 45 days of isolation.

“Each province has its own regulations, approaches and views on fighting the epidemic,” Nghia said. According to him, a problem that forces businesses and associations to work with each locality, with more than 60 provinces and cities, they will not have enough resources to implement.

According to Mr. Hao, after the documents of the Government and Ministries on removing difficulties in goods traffic, localities have to do it even tighter. “The Ministry of Transport named Quang Ninh by name in eight provinces where sub-licenses were issued, making it difficult to circulate goods, but everything is still the same,” he said.

The requirement to keep traffic smooth has been mentioned many times by Government leaders. A few days ago, Deputy Prime Minister Le Van Thanh assigned the Ministry of Transport to take responsibility if there are many regulations and sub-licenses that cause difficulties for people and businesses in goods circulation.

VLA said that the recommendations of the later stages of the association and businesses focus on the only desire that the regulations are implemented by the Government locally. But so far, it is still difficult.