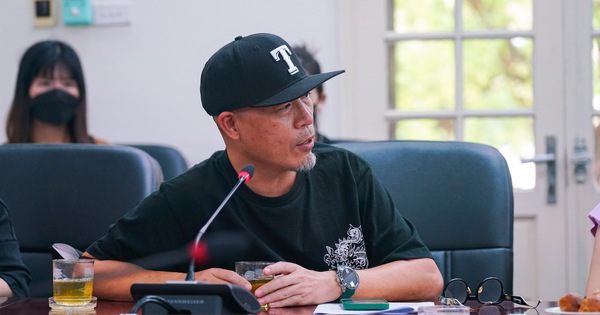 Musician Huy Tuan, the author of the song SEA Games 31 mentioned above, revealed at the press meeting about the opening art program of SEA Games 31 will take place on May 10 in Hanoi.

Musician Huy Tuan is also the author of the song SEA Games 31 Let’s shine – Let’s Shine is also the music director, in charge of the music for 120 minutes of the SEA opening art show Games 31.

If the audio version of the song SEA Games 31 was announced in April with 5 participating artists, Tung Duong, Ho Ngoc Ha, Van Mai Huong, Isaac, Den Vau, the opening night version of this song has not revealed the artists who will participate. . However, can be sure about the participation of singer Tung Duong.

The song performance ends the SEA opening art show Games 31 is very different from the announced version, which will be a version dedicated to the opening ceremony.

In addition to the singers, the performance will have thousands of participants. Therefore, musician Huy Tuan said that his brothers in his crew jokingly told him that this is one of the most expensive songs (in terms of cost) that they have ever heard.

Talking more about the music part of the opening art program of the 31st SEA Games, musician Huy Tuan said that he accepts this job as a great pride in his music-making life.

Therefore, the time was too short, 2 months for 120 minutes of music for a program of “national face”, but he made his best efforts, mobilizing all brothers in the profession to participate in the program. . All work together with the spirit of considering this task as “a unique opportunity in my career to participate in composing for a historic SEA Games”.

“This is really a special congress that we are all eagerly waiting to see each other freely after 2 years of the pandemic.

I composed the song SEA Games under difficult circumstances, when my whole family was stuck in Hanoi and could not enter Saigon because the epidemic in Hanoi was tense and there were F0 people in my family. , musician Huy Tuan shared.

He said, the music for the opening of SEA Games 31 will have many highlights. Music shows the spirit of Vietnam and is close to the ears of international friends. The main language is World Music, based on international rhythms, the melodies are performed by Vietnamese traditional musical instruments. About the opening art program of SEA Games 31, the director – Meritorious Artist Tran Ly Ly said, the MCs of the program are Duc Bao and MC Phi Linh.

The show was spectacular with many great scenes with hundreds of participants, the force of actors on the field was about 1,000 people, but including other service forces, it reached nearly 3,000 people.

Mr. Do Dinh Hong – Director of Hanoi Department of Culture and Sports, representative of the agency assigned to organize the opening and closing program of SEA Games 31 – said that Hanoi and the entire team participated in the program with great determination to overcome all difficulties because the implementation time was too urgent, because Vietnam had only officially announced the time of full opening. from March 15.

Although he was well prepared for all bad weather situations, Mr. Hong admitted that “the weather determines how successful the program is, because if it rains and winds, the actor will be like a dragonfly with wet wings, very difficult to be beautiful”.

He said that there is no technology to shoot clouds, so he only knows “may God help”, and the artist also tries his best in every situation.

Mr. Hong shared his determination to do well in organizing SEA Games 31 to “the best image of our country after this SEA Games”.