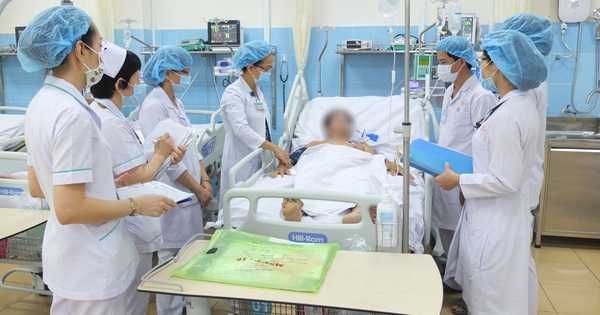 Doctor Nguyen Van Nhan, Hospital Emergency Department of Thu Duc City, said that according to normal physiological function, the pancreas will secrete pancreatic enzymes to contribute to the digestion of food. These enzymes are secreted in an inactive (pro-enzyme) form and they are only activated to become effective in the duodenum. Acute pancreatitis is a process of tissue self-destruction caused by the pancreatic enzyme itself. Common manifestations are severe abdominal pain, vomiting …

If gastrointestinal fluid leaks out of the pancreas, it can erode neighboring internal organs, causing multi-organ failure, which is life-threatening. In some people with lean body, each meal, even though the amount of nutrients is high, the body parameters do not seem to change. But for the overweight group, the body accumulates a lot of fat, each hearty meal contains many dangers.

Acute pancreatitis due to hypertriglyceridemia is a metabolic disorder that usually occurs after large, fatty, and protein-rich meals, especially after drinking alcohol and beer. Recently, Thu Duc City Hospital has received many emergency cases of pancreatitis (due to eating and drinking well during Tet holiday). One cause that also contributes to this disease is a passive lifestyle, not exercising while eating a lot of fat.

Do not use alcohol or beer excessively

TTT patients (37 years old, in Long An province) have just been saved by Binh Dan Hospital. Mr. T. was hospitalized in the emergency room with severe pain in his left upper abdomen, sweating, sweating, and a fever of 38 degrees Celsius.

Because his family sells beer, Mr. T. often drinks beer. Drinking many familiar things for many years now, drinking about 0.5 to 1 liter of beer every day. 3 days before being admitted to the hospital, after a “free gas” drink, Mr. T. had a lot of abdominal pain with vomiting, and his stomach distended. At the emergency department of Binh Dan Hospital, Mr. T. was diagnosed with severe necrotizing pancreatitis with acute kidney damage and combined sepsis. After continuous dialysis treatment, draining necrotic fluid hematoma, Mr. T. has just passed the critical crisis.

MSc-Doctor Nguyen Thanh Phuong, Deputy Head of Binh Dan Hospital Intensive Care and Anti-Poisoning Department, said that most (about 80%) of cases of severe necrotizing pancreatitis are men, the average age is 30- 40 and onset of pain after drinking alcohol or beer. People with acute necrotizing pancreatitis often have a very poor prognosis, multiple organ failure progression and a mortality rate of more than 30%. Alcohol and beer abuse is identified as the cause of 70% of chronic pancreatitis.

Some of the less common causes include medication, infection (due to cholelithiasis on a background of diabetes mellitus), metabolic disorder or unknown reasons.

People who regularly drink alcohol, beer or have a history of pancreatitis need to educate themselves and their families about this pathology. When there are signs such as severe abdominal pain, congestion – defecation, vomiting, bloating after a hearty meal or prolonged drinking or beer, it is necessary to consider the possibility of acute pancreatitis to come to the hospital for timely treatment. time.

Liver failure, alcoholic cirrhosis are the things that people often talk about, but acute alcoholic pancreatitis causes rapid death if progresses badly. The only preventive way is to limit excessive alcohol and beer use.