Journey back to love 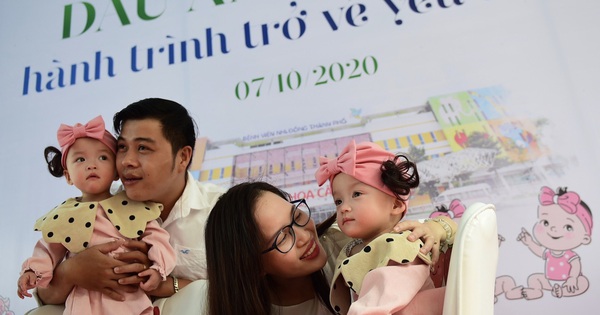 Prof. Dr. Tran Dong A, professional advisor for the surgery, expressed his joy that the children have recovered very well. According to Prof. Dong A, this surgery is very memorable because it took place even in the world against Covid-19 epidemic prevention and was a combination of the team, is the pride of the generation of medical doctors, young Vietnamese doctors. Male.

The surgery is in accordance with international standards

It can be said that the big surgery separating the two children Truc Nhi – Dieu Nhi is the spotlight of daily monitoring of the national and international community, as well as the bright spot of the health sector in Ho Chi Minh City, showing the crystallization collective wisdom to perform human surgery.

Talking about the situation of Truc Nhi – Dieu Nhi when he was discharged from the hospital, Dr. Truong Quang Dinh, Director of the City Children’s Hospital, said that the body parts of the two children were almost stable. Babies can urinate normally on their own, while passing through the anus temporarily. Dieu Nhi had congenital stenosis but this condition has been overcome.

Truc Nhi – Dieu Nhi will continue to re-examine and undergo long-term health monitoring and nutritional supplements. In the coming time, the children will have 4 surgeries. Specifically, in the near future, Dieu Nhi will have surgery to close anus temporarily, and it will be more difficult to reconstruct the anus for Truc Nhi because the baby does not have an anus. According to Dr. Dinh, this is only an initial success, will follow 2 babies until they develop completely as usual.

Present at the discharge ceremony, Prof. Dr. Tran Dong A expressed his joy when the children have recovered very well. He joined from 2019, together with the doctors and doctors, he consulted until the surgery to separate the two babies into two independent bodies and returned home. Professor Dong A said that this is an international standard adhesion surgery, the surgery achieved the expected result is a great effort of both the medical team and the young Vietnamese doctor. “We are determined that even children with severe illness, complicated connections must still return to their parents like normal children. The surgical team has kept the promise made to the family. Those who do surgery like us feel happy “- Professor Dong A shared.

GS-TS-BS Nguyen Tan Binh, Director of Ho Chi Minh City Department of Health, was also very touched when he met two beautiful, healthy, active children and prepared to leave the hospital. Dr. Binh said this successful separation case is an unexpected achievement of the city health sector. The growth of the team of young medical and doctors is very remarkable.

The hall space of the City Children’s Hospital in the morning 2 children Truc Nhi – Dieu Nhi were bustling with joy, many people came to happily spread these wonderful emotions.

Present very early to welcome the first two children back home, Mr. Hoang Tu, Truc Nhi – Dieu Nhi’s grandfather, shared his happiness, then filmed and played with her. Mr. Tu said that these are the first 2 grandchildren of his family. When they were born, unfortunately the children were attached, but thanks to the talented hands of the doctors, they brought them back to normal people.

To the couple Mr. Hoang Anh and Ms. Tran Thi Hong Thuy, the parents of Truc Nhi – Dieu Nhi, on the journey to return lovingly, welcome Truc Nhi – Dieu Nhi home after nearly 3 months in the hospital, are happy people happiest, can not be expressed in words. Perhaps, this is the second remarkable moment of life after the first, the time to wait outside the operating room, suppressing to hear the doctor announce that the two children have been completely separated.

Her expression was brighter than usual, Tran Thi Hong Thuy tried to suppress her emotions after a long time with 2 children living in the hospital. “Going home is fun but also very much attached to this place. Because really the last few days in the hospital are an unforgettable memory with the loving hearts of the doctors and doctors” – Thuy confided .

“Have peace, two children, goodbye to the creaking of the ventilator, farewell to the tangled ropes of the infusion forest, away from the blinding flash of the ladies, the reporter. The journey back to love. Your love is near the end of the road. Please love your parents even more because they are the bravest people on the 90-day stormy trip at the City Children’s Hospital ” – Dr. Truong Quang Dinh, Director of the Hospital – Head of the operation team, who is also the first incision of the knife line, shared on his personal page the night before the day when the two children were discharged.

The cost of treatment and surgery to separate the conjoined twins Truc Nhi – Dieu Nhi is 1.2 billion VND, of which the health insurance pays more than 600 million VND. In recent years, many donors have joined hands to support the twins with more than 2.3 billion dong. After deducting the cost of treatment, the City Children’s Hospital awarded a savings book of VND 1.5 billion to the family. On this occasion, the representative of Vietnam Record also awarded the certificate of record setting to the City Children’s Hospital with the record “Major surgery complex with the team of most participating doctors and doctors in Vietnam for surgery. Adhesion of the pelvic abdomen successfully for twins “.