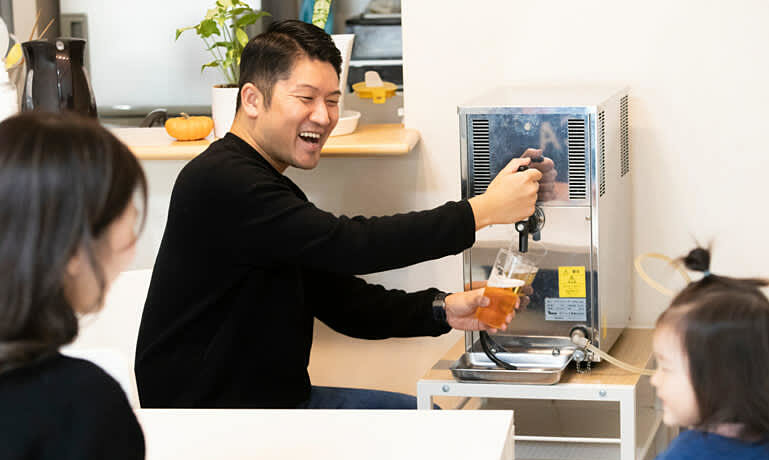 Afraid to go out because of the epidemic, Japanese people buy professional utensils in restaurants and pubs to organize parties at home.

Concern about Covid-19 makes many Japanese people reluctant to risk going out to eat. Therefore, they try to cook and clean like real chefs and bartenders. With the help of tools and equipment, of course, which are sold to restaurants and bars.

Takeshi Suzu (38 years old) in Edogawa ward (Tokyo) has a “brewer shop” right in his kitchen, after installing a professional draft beer cooler like in a restaurant. “It’s even better than in izakaya (Japanese-style pubs),” Suzuki said, awkwardly pouring beer from the machine into his favorite mug, “And I got drunk really fast too, maybe because it’s at my house feel more comfortable”. For him, the taste of beer from the machine is very unique, completely different from canned beer.

Suzuki used to go out drinking with business partners and friends almost every night. But such opportunities are now few and far between. Instead, he started inviting a handful of friends over to his house party. However, buying and throwing away many empty beer cans after partying annoyed him.

Eventually, he and his 26-year-old wife Sayaka came up with a new idea. “If we could drink draft beer from the tap, wouldn’t that be heaven?”, they thought. At the end of November, the couple rented a chiller with a 10-litre barrel of draft beer, enough for about 28 cups. The rent for a month is 20,000 yen ($175).

Deeblue, a Tokyo-based company, started renting out draft beer coolers to customers at home in 2015. Previously, they only offered hourly rentals for events like barbecues. But in the summer of 2020, the company received its first request from an individual for a daily rental.

Since then, Deeblue has rented out to about 20 households. “I have received requests from people who want to drink draft beer at home. This will create a new market,” said Jiro Nanri, the company’s president.

According to Nomura Research Institute, the leisure time that Japanese people get from working from home has increased to 90 hours per person per year. This allows them to spend more time on hobbies or household chores. As a result, appliances that were originally designed for restaurants can now become home appliances, serving consumers’ preferences.

Keiko Tamura, a laborer in Shisui, about 60 kilometers east of Tokyo, bought a machine that keeps canned food warm. The transparent machine holds cans of amazake, a beverage made from rice, canned coffee and corn soup. “It’s like I’m at a convenience store. It’s fun,” said 48-year-old Tamura.

She bought this machine for about 25,000 yen in early November. They are popular in convenience stores in Japan. Tamura said the decision to buy it came after her family started spending more time at home.

“It’s more convenient than I thought,” said Tamura’s 80-year-old father. Her eldest son also loves how the machine quickly warms up cans of drinks during a break in the middle of school.

“Orders increased suddenly. We still haven’t caught up with demand. I was surprised,” said Noboru Yahata, president of Nippon Heater Kiki, the company that makes the machine. Online sales of the product more than doubled in 2020 from the year before. The company forecasts they will quadruple between 2019 and 2021.

Yoshikatsu Yasunaga, Product Strategy Department of kitchen appliance brand Tempos, said that freezers, food processors and pressure cookers with a capacity of 8 to 10 liters before the pandemic were sold only to commercial customers. commercial, like restaurants. But now, they sell to individual customers through online channels. “Cooking lovers are trying to mimic the professional experience of using the time they have at home,” says Yasunaga.

Products commonly found in izakayas are also growing in popularity. Traditional Japanese clay pots are used for cooking at the table, as well as kurojoka (a teapot-like clay pot used to warm shochu) are two popular items. The demand for these products is decreasing due to a decrease in the number of recently opened restaurants.

“We realized that these products could be sold to consumers,” Yasunaga said. His company is using social media to promote products to individual customers.

At Koki Holdings in central Tokyo, individual customers’ purchases of Hikoki brand vacuum cleaners have quadrupled this year compared to 2019. The machine is commonly used to pick up sawdust and other debris in the city. construction sites.

According to Jun Morita, a Koki sales representative, this vacuum cleaner has a stronger suction power than a household machine. “Maybe people want to use professional tools to do common cleaning tasks,” Morita said.

Professional devices are also popular with do-it-yourselfers. Sales of waterproof and fireproof wall materials have skyrocketed at Tomoyasu Works, a home furniture manufacturer in Yao, Osaka Prefecture. In the past, many people chose to hire professionals to waterproof their homes. But more and more people buy their own cutters and glue to make them.

Session An (according to Nikkei)