IPhone 12 coming soon: How chaotic is the old iPhone market? 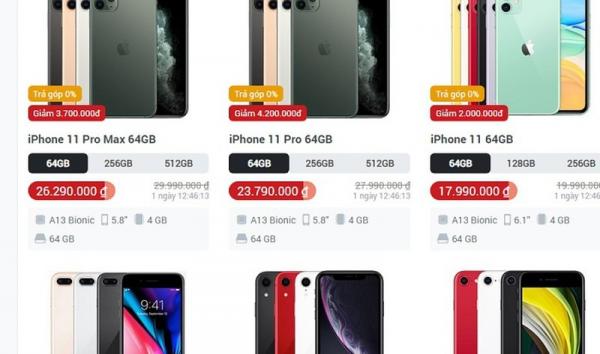 Promotions and discounts on old-fashioned iPhone are seen as a step in paving the way for the upcoming generation of iPhone 12.

According to many people specializing in selling phones, every time Apple prepares to launch a new product, the price of the old phone series “plunges”. This year, Iphone The 12 series will be held on October 13 (at 0:00, Vietnam time).

Therefore, the iPhone 7, 8 or iPhone XS, XS Max and XR or iPhone 11 are simultaneously discounted by several million VND compared to the old price.

For example, genuine iPhone 8 Plus 128 GB version was offered for sale by some systems for 13 million dong, down 400,000 dong from the previous month. Many stores say that the 64 GB iPhone 8 Plus is out of stock.

In early June, the system Hoang Ha Mobile sold the genuine 64 GB iPhone 11 for 18.4 million dong. Within 2 months, the price of the device decreased to 17.6 million. Currently, this iPhone model is only 17 million dong.

Just launched in April and just released in Vietnam in June, iPhone SE 2020 also continuously reduces prices. When they first returned to Vietnam, the genuine iPhone SE 2020 was sold for 12 million dong. Currently, this product is priced from 10.6 million for 64 GB version.

Not only genuine iPhone, many shops selling hand-held phones in Hanoi also simultaneously reduced the prices of old iPhone models. Accordingly, the duo iPhone 11 Pro and 11 Pro Max 64 GB version are being offered for sale at prices of about 17.7 million and 20.8 million respectively, down 1.5 million compared to before.

iPhone XS, XS Max are also discounted by 1 million. The current price of this duo is being offered by stores for about VND 11.5 million and VND 13.5 million for the 64 GB version, respectively.

IPhone 12 coming soon: How chaotic is the old iPhone market?