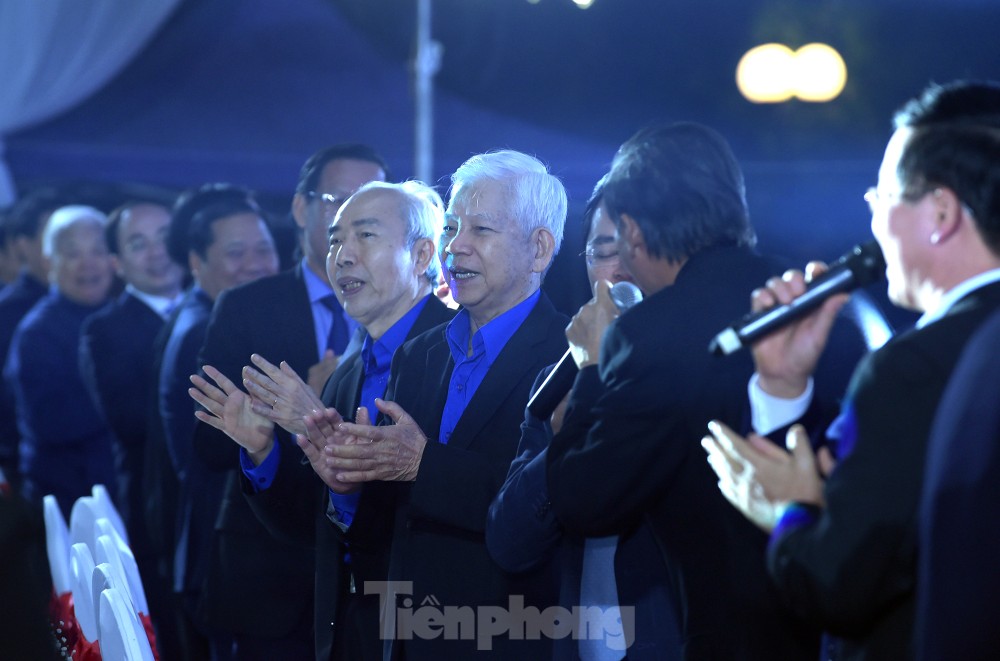 On the evening of March 22, in Vinh Phuc, the Central Youth Union organized the traditional fire-keeping program “Bright and enthusiastic” and awarded the Ly Tu Trong award in 2021.

The program took place with many levels of emotions from the passionate stories of former Youth Union officials from the period.

Mr. Ha Quang Du – Former Member of the Party Central Committee, former First Secretary of the Youth Union, said that the period when he made the Union excited the momentum of the movement “Three are ready”, has fostered and motivated the youth. strive to rise up and dedicate themselves to the country. “At that time it was difficult, but I was very excited about the delegation’s work,” Mr. Du said.

Mr. Du said that in the 1980s, the socialist countries from the Soviet Union to Eastern Europe had many very confusing and complicated issues, greatly affecting the socialist ideal education; solidarity, gather young people. In 1987 and 1988, the membership rate of union members declined dramatically.

From that fact, the Central Committee, headed by First Secretary Ha Quang Du, drastically renewed with many strong measures to unite and gather young people. With the active renewal of youth’s appearance, after only three years of implementation, impressive results have been achieved. Specifically, the proportion of pretty and strong Youth Union branches increased by 51.7% compared to 1988. From 1989 to 1991, the entire delegation admitted 1,152,000 new members; excellent membership rate increased by more than 50% compared to 1988.

Mr. Ha Quang Du also recounted the anniversary of being voted as the person with the most beautiful eyes at the Vth National Congress of the Youth Union. The prize for the award for the most beautiful eyes is the socks. “This is a very humorous reward for the Union members. But I understand the deep hidden behind the reward is that the reunions, the youth remind me, put on socks and lead the way up, “Mr. Du said. 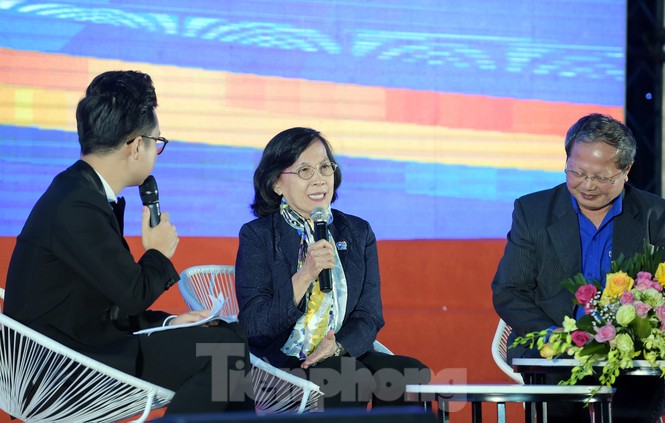 Sharing about the period of youthful prominence, Ms. Pham Phuong Thao – former Secretary of the Central Youth League said: “What I felt at that time was the inspiration of a heroic nation, the youth generation. Hero gives me the strength to go on to do his job well. The aspiration of me and the young at that time was to regain independence and freedom for the Fatherland ”.

Mrs. Thao said that joining the mission, she has grown from a shy person to a stronger and more mature person. “Truong Doan is a big school that teaches many meaningful things for young people like me to experience and grow,” Thao said.

Mrs. Thao also recalls recalling her memories when she was captured by the enemy. “During the war, I spent time with the people: eating together, living together, working together. One day, passing the enemy post, I was arrested again. While being escorted back to the station by the enemy, a number of people around there came to realize that I was their child, an ordinary worker, and did not participate in revolutionary activities. They did it to protect me. That memory lingers in me about the motto of living close to the people, the hearts of the people, ”said Mrs. Thao.

Youth month made a bold mark

According to Mr. Quan, the year 2000 was the year when the youth volunteer movement strongly developed. Reality shows that, if you want the youth movement, which represents the youth volunteering movement, to develop dynamically, effectively, and create strong social effects, it is necessary to have adequate and reasonable space and time to attract, gather all young people to participate with specific projects and works.

If it lasted for a year, it would be difficult for the large and long space to create the top of the youth volunteer movement. A day or a week is too short. Therefore, the Standing Committee, Central Committee of the Youth Union have discussed carefully and come to an agreement, there should be a “Youth Month”.

Mr. Quan added: In order to get the Party’s approval, the Government agrees to take March every year as the Youth Month, not simply submitting the policy but needing grounds to persuade. Therefore, the delegation decided to actively deploy. In March 2003, the Ho Chi Minh Communist Youth Union launched the Youth Month with the spirit of “Youth act for the community, the society cares for and foster youth” and succeeded beyond expectations, making a strong impression. Throughout the country, union members and young people emulate vigorously, implementing a series of works and practical work for the community. Leaders of the Party, Government, leaders of all levels, local authorities spend time meeting, talking, exchanging with Youth Union officials, with union members, young people, listening to thoughts, aspirations, remove problems, create conditions for the work of the Youth Union and the youth movement.

“At the end of the Youth Month 2003, we submitted a report to the Politburo, the Party Central Secretariat for the policy. On October 16, 2003, the Party and Government agreed to choose March every year since 2004 as the Youth Month. This event is considered to be of historical significance and a milestone in the national youth movement. March, Youth Month has the day of founding the Youth Union, March is also the spring ”, the former Secretary of the First Central Secretary Doan Hoang Binh Quan recounted. 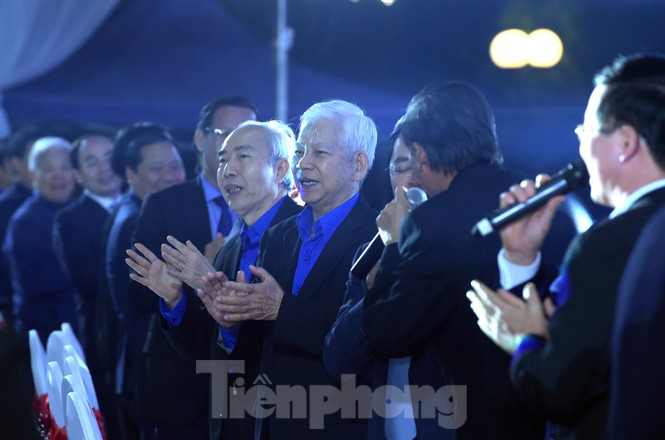 Talking at the program, Mr. Tran Dinh Dan – former member of the Party Central Committee, former member of the Standing Committee of the National Assembly, Chairman of the Office of the National Assembly, former Secretary of the Youth Union of Ha Tinh province reviewed about the hard times, lack of land in Nghệ Tĩnh period in the years 1991 and 1992. However, the generation of Youth Union cadres like him at that time rose strongly, overcoming difficulties to complete their work well.

“My youth had an ambition to do well at my job. Youth Union is a school forging me to grow up, ”said Man.

Exchanging at the program, there were also delegation officials who received the Ly Tu Trong Award in 2021. Ms. Le Thi Ha Giang – Secretary of the An Binh Ward Youth Union (Di An City, Binh Duong Province) is proud of the difficulties. His father’s system, the previous Youth Union cadres, have drawn a glorious journey for the delegation. “I am very honored to wear the green shirt of the youth volunteer. The delegation is a part of my life ”, Ms. Giang said and said, will constantly strive and strive to deserve the tradition of the delegation.

Ms. Giang shared about the model of the Youth Workers’ Association at the hostel. With this model, the delegation got closer to young workers, listened to, understood their feelings and aspirations, and promoted activities to care for the workers as well as their children with many essential activities. real. 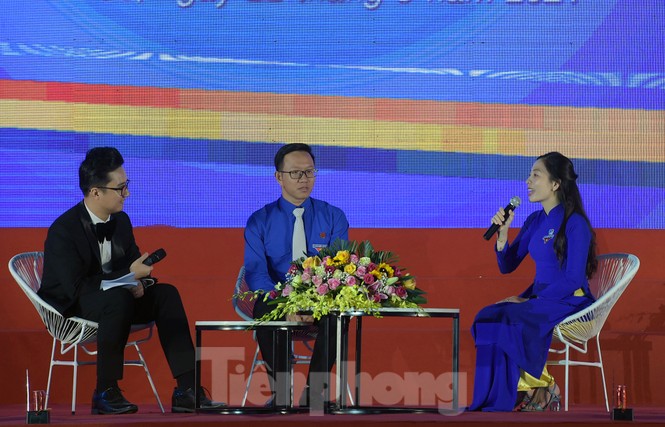 Mr. Le Trinh – Secretary of the Youth Union of Chinh Gian ward (Thanh Khe district, Da Nang city) told about the volunteer spirit of young people who did not hesitate to support the people in the epidemic days of COVID -19 complex. With the model “Meal for 0 VND”, the Youth Union of Chinh Gian has brought warm meals to the poor in difficult times.

What touched Mr. Trinh was the image of the Youth Union officials going to the market to buy each bunch of vegetables and fish to prepare meals for the people. Especially with the support of the people around, many vendors at the market have added extra pounds of rice, vegetables, and meat so that Youth Union can have meals of 0 VND. “The color of the youth volunteer green shirt really makes a mark on all roads, is recognized by the people, especially in the most difficult times,” Mr. Trinh said.

On March 22, Bac Ninh Province Youth Union celebrated the 90th anniversary of the Youth Union’s establishment. The program reviews the glorious traditions of generations of Youth Union members and youths in Bac Ninh province and offers a plan to take the first step in the patriotic emulation movement, contributing to building a civilized Beijing homeland.