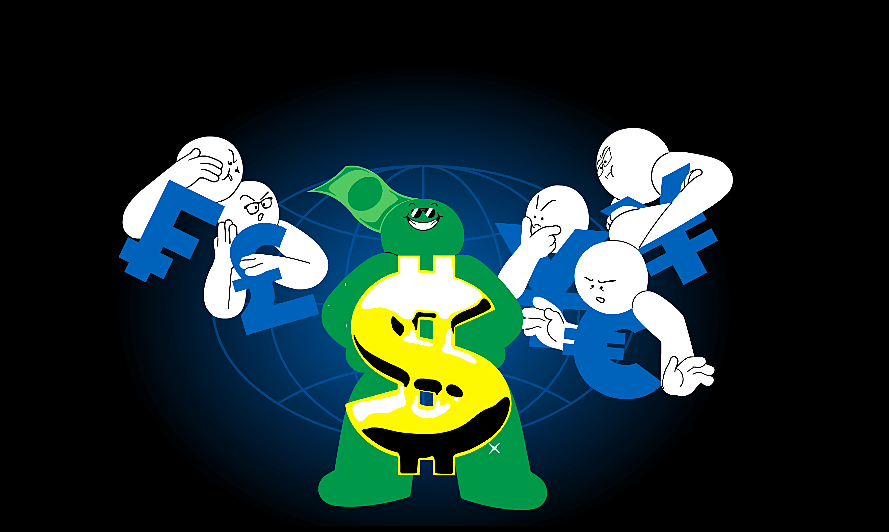 The USD is so strong that countries have to raise the domestic currency price to reduce the vulnerability of imports during inflation. The currency war started from there.

With the US Federal Reserve (Fed) heavily tightening the currency to fight inflation, the USD has risen sharply by 7% year to date. Meanwhile, other central banks are also busy trying to control the price storm that is coming in “home turf”. Therefore, now they do not hesitate to publicize their views, will strengthen the local currency to reduce import costs.

It’s a fairly rare form of intervention and even a few small moves can move the market. On June 16, Switzerland surprised traders with its first rate hike since 2007, sending the franc to a seven-year high. A few hours later, the Bank of England announced a rate increase and forecast several larger increases.

Earlier, in February, Economist Isabel Schnabel, a member of the board of the European Central Bank (ECB), warned that the euro had weakened against the USD. In April, it was the turn of the Governor of the Bank of Canada Tiff Macklem to mention the weakening of the Canadian dollar.

The value of money has emerged as an increasingly large part of the inflation equation. Goldman Sachs Group economist Michael Cahill says he can’t remember the last time central banks raced to make their currencies stronger. That is, it has been a long time since this situation has occurred.

The forex world calls it a “reverse currency war” because over the past decade, countries have often done the opposite. They actively make their currency weaker to sell goods abroad at more competitive prices, in order to support economic growth. But now, with the rising cost of everything from fuel to food to household appliances (which many places have to import), boosting purchasing power has suddenly become more important.

Follow Bloomberg, it’s a dangerous game. Left unchecked, this international competition threatens to cause huge fluctuations in the value of the most dominant currencies. At the same time, export-dependent manufacturers and financial spending of multinational companies are also adversely affected. The burden of inflation is spreading all over the world.

The forex war is inherently a zero-sum game – there will be winners and losers. Alan Ruskin, head of international strategy at Deutsche Bank, says every country has the same desire (to win). But “there can’t be that in the monetary world,” he said.

One of the most notable large-scale government interventions in money markets was in 1985. The value of the dollar skyrocketed during President Ronald Reagan’s first term due to rising long-term interest rates, the highest against the British pound.

Initially, the White House saw this as a tribute to the strength of the US economy, but limitations quickly emerged. Mr. Reagan came under pressure from American manufacturers, who found it increasingly difficult to market their goods abroad.

Lee Morgan, former chief executive of machinery group Caterpillar, estimates that hundreds of US companies lose billions of dollars in international orders annually to Japanese competitors due to a stronger dollar at the time. there.

In September 1985, Fed leadership met with French, German, Japanese and British colleagues at the Plaza Hotel in New York. In what became known as the “Plaza Treaty”, they devised a plan to cause the US currency to depreciate by 40% over the next two years, until the finance ministers signed the “Louvre Agreement” in Paris to put an end to this attempt.

Since then, governments have rarely explicitly intervened in the value of money. But there are still smaller-scale actions. In 2010, Brazilian Finance Minister Guido Mantega referred to a “currency war” when he accused countries including Switzerland and Japan of deliberately weakening their currencies to increase their competitiveness in the region. foreign. Tensions deepened the rift between emerging market economies and advanced economies.

Or over the years, China has angered some foreign experts by refusing to allow the yuan to strengthen, in order to keep its exports cheap. Donald Trump himself used the story of the yuan exchange rate in his election campaign.

As the US and China tit-for-tat tariffs during his tenure, China has allowed the yuan to fall deep below a line it hasn’t crossed in more than a decade. The move sparked warnings that the currency could be “weaponized” and prompted the US Treasury Department to label China a “currency manipulator”.

Perhaps no country today tries to keep its currency as tight as Japan. Central Bank (BOJ) Governor Haruhiko Kuroda continued to take a dovish stance, conceding that the yen’s plunge is not good for the economy. The coin is down more than 18% this year, and forex traders are increasingly betting on the BOJ date will have no choice but to change their stance.

In today’s currency war, a stronger USD is expected to suffer the most if the Fed’s inflation control goal is not successful. Finance Minister Janet Yellen emphasized the commitment that the exchange rate is “determined by the market”. But whether it’s true or not, politicians celebrate when the dollar appreciates.

Senator Pat Toomey of the Pennsylvania Republican Party said that the Fed must maintain this effort to fight inflation. According to him, the strength of the dollar is “helpful a lot”. But the US may not benefit for long. The Swiss and British rate hikes weighed on the dollar, which in June recorded its biggest two-day drop since March 2020.

The developing countries, especially exporting countries like Argentina and Turkey, are the most vulnerable, said Jeffrey Frankel, an economics professor at Harvard University. “The worst thing in emerging economies is letting your currency depreciate against the dollar when you’re in debt in dollars,” he said.

Exactly how much a stronger currency will reduce inflation remains unclear. Either way, Citigroup’s chief global economist Nathan Sheets, who previously worked for the Treasury Department and the Fed, thinks that in this era of rampant inflation, a stronger currency is still a good thing. According to him, in the past, a 10% increase in the USD would reduce inflation by about half a percentage point. Today, it can drag down to a percentage point.