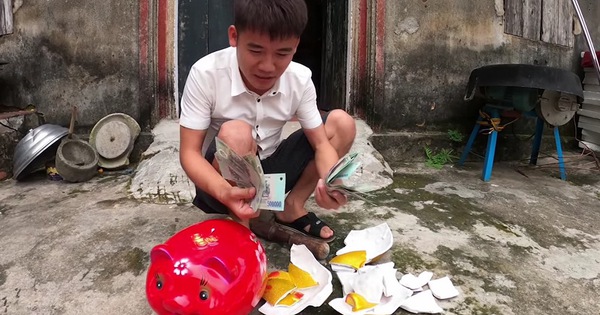 Hung Vlog in the video “Troll steals money, smashed the piggy bank of his sister, brother to go out and the end” has been removed – Screenshot

After the scandal of being fined 7.5 million VND for the video “Troll sister, brother eats a whole chicken porridge pot and the end”, YouTube channel owner Hung Vlog continues to be sanctioned for new violation.

On the afternoon of October 7, Bac Giang Department of Information and Communication said that the Department inspector worked and made a record of administrative sanctions by Nguyen Van Hung (born in 1992, the owner of YouTube channel Hung Vlog, residing in the district. Lang Giang, Bac Giang) because of the act of posting illegal videos on social networks.

It was the video “Troll steals money, smashes the piggy bank of his sister, brother to go out and ends” on October 3. The content describes how to beat the piggy bank to get quite a large amount of money.

At the meeting, Hung Vlog admitted that the above behavior was due to lack of understanding, only thought “posting this video with the purpose of making fun of boys and girls in the family”.

Inspector of the Department of Information and Communications of Bac Giang Province said this was a recidivism of Hung Vlog after being warned and sanctioned in September, so it should be strictly dealt with.

The inspector makes a penalty record of Hung Vlog 10 million VND, based on point b, clause 1, Article 101 of Decree 15/2020 / ND-CP of the Government stipulating the sanction of administrative violations in the post sector telecommunications, radio frequency, information technology and electronic transactions.

On the afternoon of October 7, the department inspector also reminded Nguyen Van Hau (born in 1994, the owner of YouTube channel Hau Troll and Hung Vlog’s younger brother) about the video “Stealing the chicken from my neighbor’s house, my neighbor’s super spicy grill invites my neighbor to invite her. team “in August this year. The video was also removed by the Hau Troll.